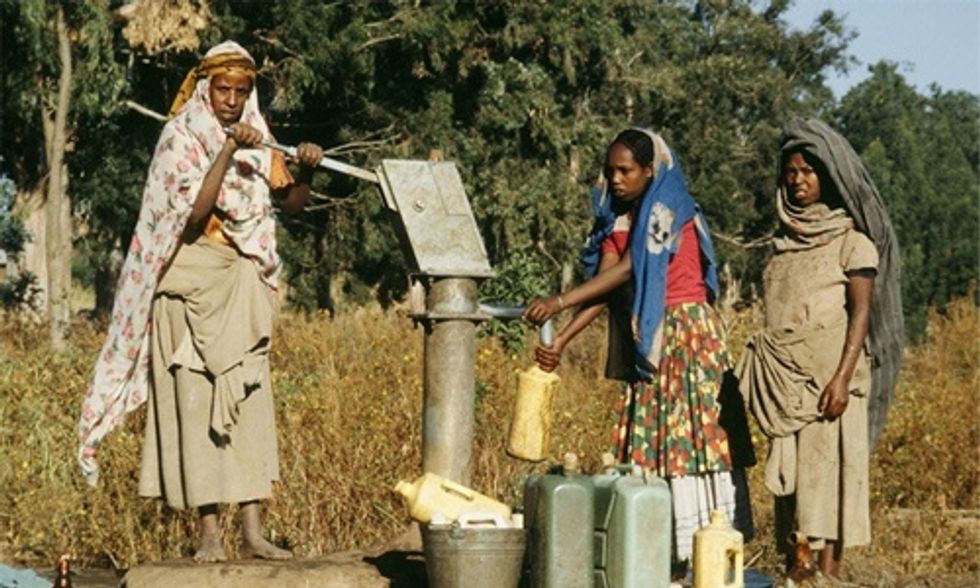 Driving home from work last week, listening to NPR, I learned that the United Nations report on the progress the world is making toward the Millennium Development Goals (MDGs) had just been released. The original MDGs were a set of eight goals crafted in 2000 to attack global poverty by 2015. Targets were established which required countries to gather consistent data on a range of issues, but are they always the right issues?

Worldwide, the poor, particularly those in the global south, are already suffering from the ravages of corporate exploitation and climate chaos. Photo credit: Global Greengrants Fund

For 15 years, we have all been hearing about the MDGs, now touted by UN Secretary-General Ban Ki-Moon, as the “most successful anti-poverty movement in history.”

I was shocked to learn from NPR’s Nurith Aizenman that the method for establishing the goals and targets was “so casual they almost forgot something.” Aizenman was interviewing Lord Mark Malloch-Brown, who explained how the goals were set: “It’s brilliantly simple. It was myself with some chums in a room kind of thing.” And then Malloch-Brown admits, that just before they went to press, “Oh goodness me, we’ve forgotten the environment goal.”

The Right Honorable Lord Malloch-Brown has had a distinguished career as a journalist for The Economist, a consultant on communications and development, an employee of the World Bank, the Administrator of the UN Development Programme and other UN jobs, a UK government minister, and the Minister of State in Britain. I appreciate his honesty about the process, but wonder who his other chums might have been and if the room he mentions was smoked-filled. (I’m almost certain they didn’t include those most affected by poverty in the poorest parts of the world).

Why is the environment so often an afterthought for the world’s leaders, elite policy makers and the media? The New York Times, in covering the report, mentions climate change just once, in a paragraph on contentious issues to tackle in the “next set of development goals,” the so-called Sustainable Development Goals.

The main problem here, is the very emphasis on “development” as the answer to the world’s most pressing problems. As anthropologist Arturo Escobar has eloquently argued in Encountering Development, international development is akin to colonialism or “cultural imperialism” because poor countries have little means of declining politely.

According to Escobar, development has largely failed. Why? Because it is a problem even when it succeeds, in that it so strongly sets the terms for how people in poor countries must live, as explained in The Guardian.

I would challenge the notion that environmental concerns are necessarily compatible with development, especially for the communities and poor countries most affected. Sustainable development projects almost always discount local knowledge and often better serve the interests of elites (both within and outside the country), foreign donors, NGOs, international financial institutions, transnational corporations, and other international players.

Too often, the most important facts are buried, as I found when reading through the Report. In the overview (the only section most people will peruse) and the mere ten pages  dedicated to the environmental sustainability goal, the finding that “98 percent of ozone-depleting substances” have been “eliminated since 1990” is aptly heralded, as is the statistic that “1.9 billion people have gained access to piped drinking water.” I’m not sure piped drinking water is actually an environmental issue, but won’t quibble.

The fact that global carbon dioxide emissions have increased by more than 50 percent since 1990 gets four paragraphs and a chart much later in the report on page 53.

It seems that worldwide “deforestation has slowed”… "but remains alarmingly high in many countries.” The report highlights the “overexploitation of marine fisheries,” a huge problem that is increasingly becoming better understood. It projects a rise in water scarcity, which currently affects 40 percent of the global population, but doesn’t cite climate change as a reason for “water stress.”

Booms in natural resource exploitation always lead to inequality. This is what I know: There may be less dire poverty in the world than 15 years ago, but never in history has there been such inequality (as explained in two Oxfam reports, here and here).

Worldwide, the poor, particularly those in the global south, are already suffering from the ravages of corporate exploitation and climate chaos. The top 1 percent of wealth holders may be enjoying their misbegotten gains, but they too are doomed if we don’t reverse or at least slow down the course of climate change.

I suspect the MDGs are actually helping the rich to get richer at the expense of the environment.