What Is a Megawatt? Megawatt-Hours & Conversions: Explained (2022)

Here are a few questions we’ll answer in this article:

Electricity consumed or produced by technology is measured in watts (W). In order to understand measurements of electricity in high volumes, you’ll have to understand a few key terms that we’ll use in this article. Here is a quick overview:

If you’re researching megawatts because you’re interested in a home solar system, you can click below to be connected with one of our top-rated installers for more information.

What Is a Megawatt?

A single watt is a very small unit. Since households typically require thousands of watts to run, when talking about energy use, it’s easier to use larger units like kilowatts (1,000 watts) and megawatts (1,000 kilowatts).

On your electricity bill, you’ll typically see how many kilowatt-hours you consumed in a month. A watt-hour is a unit of measurement for energy. A kilowatt-hour equates to the energy consumption of a kilowatt of power for one hour.

A megawatt is 1,000,000 watts of power — a thousand times larger than a kilowatt. Megawatts are  typically used to describe power capacities on large scales, such as those of nuclear power plants or the amount of energy required to power a city.

A megawatt is not the largest measure of power. After megawatts come gigawatts — equal to one billion watts. Gigawatts are used to describe amounts of power such as those generated by entire nations.

As we just discussed, one megawatt is equal to one million watts or 1,000 kilowatts. Since all solar panel system sizes are described in kilowatts, here is a quick table to help you with the conversions:

How to Convert Megawatts to Kilowatts 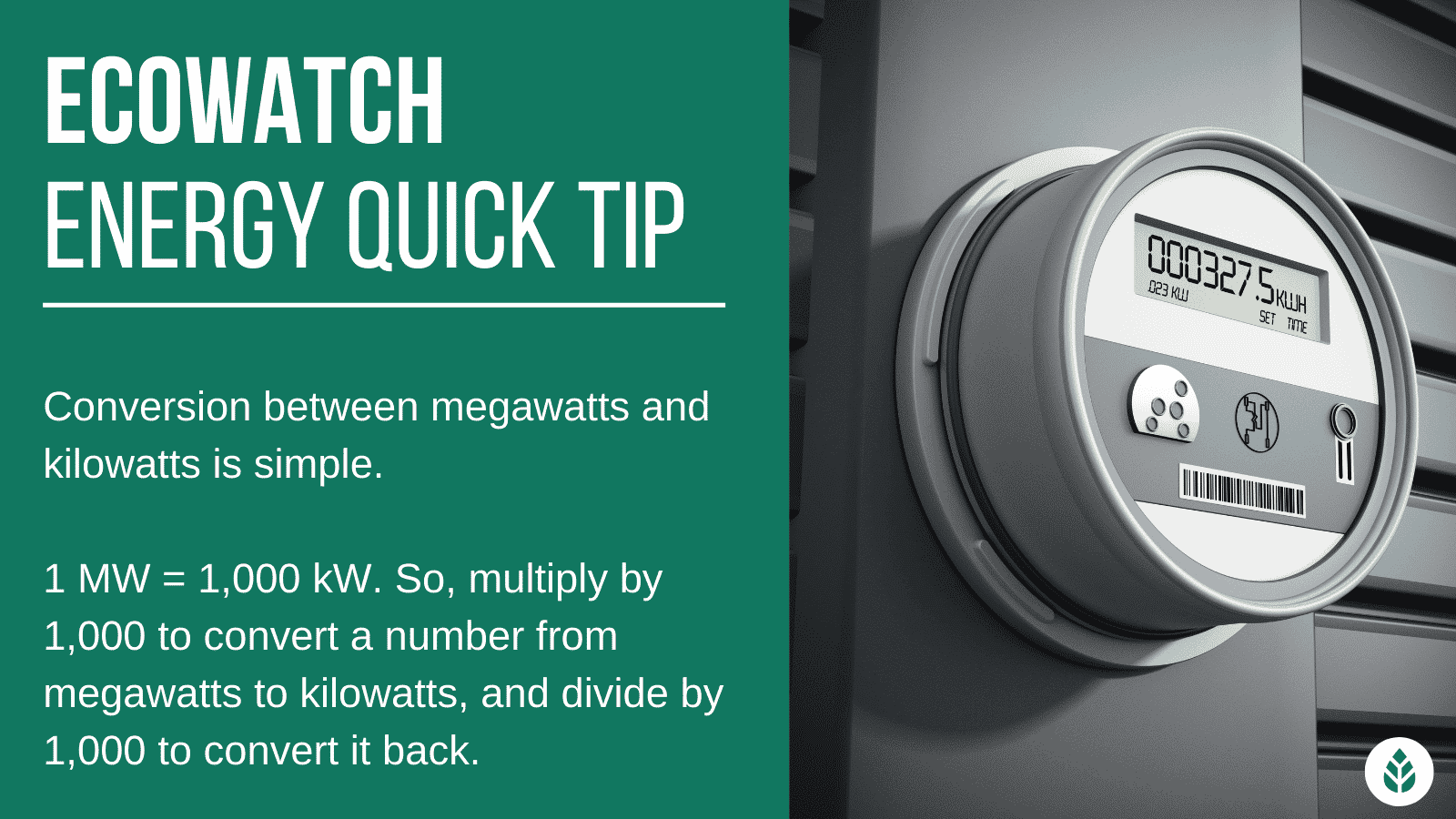 Luckily, you do not need a math degree to convert megawatts to kilowatts. The conversion is easy — just multiply the number of megawatts by 1,000.

Here’s how to find how many kilowatts are in 5 megawatts:

If you are converting kilowatts to megawatts, you just have to divide the number of kilowatts by 1,000.

Here’s how to find how many megawatts are in 50,000 kilowatts:

What Can One Megawatt Power?

A megawatt measures power on a large scale, so one megawatt can power a lot more than one household. The megawatt is the standard term of measurement for bulk electricity.1

The capacity of small solar facilities is measured in kilowatts, so one one-thousandth of a megawatt. The nine largest solar plants in the world measure their outputs in thousands of megawatts (all are in India, China, the United Arab Emirates and Egypt). Numbers 10-20 on the list of the world’s top 20 largest solar plants measure their output in the hundreds of megawatts — four of these are in the U.S.2

A single megawatt-hour can power the following:

Global installed capacity for renewable power generation in 2019 was 2,537 GW (or 2,523,000 megawatts).4 Commitment to implementing renewable energy is a critical part of Nationally Determined Contributions (NDCs) — the pledges nations make to reduce greenhouse gas emissions under the Paris Agreement. As of December 2020, 90% of the Paris Agreement signatory nations had submitted their NDCs, and 71% of the 90% (134 parties) included  quantified renewable energy targets for electricity generation.5

Here’s a quick explanation of NDCs:

If all renewable energy targets for the power sector that are included in NDCs were to be implemented, global installed capacity for renewable power generation would increase by 42% (from 2,523 to 3,564 GW) by 2030.

The U.S. submitted a new NDC when it rejoined the Paris Agreement in 2021. It set an economy-wide target of reducing U.S. net greenhouse gas emissions by 50-52% below 2005 levels by 2030 — and included a goal to reach 100% carbon pollution-free electricity by 2035. Solar installation and generation are playing a critical role in reaching this goal.6

How Much Space Is Needed to Produce a Megawatt of Solar Energy?

As of 2021, the U.S. had enough installed solar capacity (121.4 gigawatts direct current — GWdc) to power 23.3 million homes.7 However, as with other power sources such as fossil-fueled power plants, the full capacity is rarely, if ever, being generated because full-capacity operating conditions are rarely present. Factors that influence solar capacity include:

Generating one megawatt of solar energy requires five to 10 acres of space for solar panel placement. So, to supply all of the U.S.’s energy needs (not just homes but commercial, industrial, institutional and governmental needs) with solar would require much, much more space and many, many more solar panels and associated infrastructure. That’s one reason why other sources of clean and renewable energy are critical.

The average household isn’t able to install a solar energy system that has a power output as high as 1 MW. But it’s becoming increasingly popular for homeowners to buy into community solar electric power projects, which can have high energy outputs that are split among members.

If you’re looking to contribute to clean energy production by going solar, you can click below to get started with an EcoWatch-vetted installer. 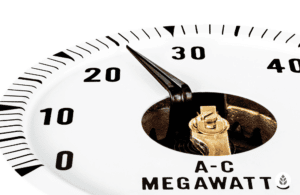 Which States Have the Best Solar Incentives? What is a Kilowatt Hour? Are Solar Panels Worth It? Can a 6 kW Solar System Power Your Home?