In this EcoWatch guide on thin-film solar panels, you’ll learn:

This guide has helped many homeowners discover the benefits and efficiency of thin-film solar panels and can help you make a decision on your first purchase. Let’s get started!

Thin-Film Solar Panels: What You Need to Know

If you’re looking to convert to solar energy on a budget, thin-film solar panels may be the best option for you. The American Solar Energy Society touts thin-film panels as the future of the solar industry.

Not only will these panels help you reap the benefits of renewable energy, but they also require less material, contain no toxic components and generate less waste.1 Just like the name suggests, the panels are thin, making the technology both flexible and lightweight.

In this article, we will go over the pros and cons of thin-film solar technology so you can decide if these are the right solar panels for your needs.

What Are Thin-Film Solar Panels?

Like other solar panels, thin-film panels convert light energy into electrical energy by way of the photovoltaic effect. Unlike traditional systems, thin-film solar panels are very light and flexible second-generation cells. They are composed of multiple thin layers of photovoltaic, or PV, materials.

The layers are roughly 300 to 350 times thinner than standard silicon, which makes the technology ideal for portable devices.2 Each cell is made of three main parts: photovoltaic material, a conductive sheet and a protective layer.

Other than its slim design, thin-film solar panels differ from traditional monocrystalline and polycrystalline panels in the materials used in production and in efficiency, but we’ll go more in-depth on this later.

How Efficient Are Thin-Film Panels?

While thin-film solar panels are cheaper than monocrystalline and polycrystalline silicon panels, they are much less efficient and have lower power capacity. Efficiency has been these panels’ biggest challenge and varies between the types of thin-film photovoltaic panels, but it has improved over time.

In 2015, Solar Frontier, the world’s largest copper indium selenium (CIS) solar energy provider, achieved a 22.3% conversion efficiency.3 This was a 0.6% increase over the industry’s previous record, but most thin-film solar substrates range from 6% to 18% efficiency.4

Though these aren’t available to consumers, Recent solar news explains researchers from the Fraunhofer Institute for Solar Energy Systems were able to achieve a record 68.9% efficiency of gallium arsenide (GaAs) panels under laser light.5 Here are the four most common types of thin-film solar panels and their efficiency ratings:

Check out this video to learn more about thin-film solar cells and how you could benefit from them.

Amorphous silicon (a-Si) solar is the oldest film-thin technology, making it the most well-developed type of thin-film PV tech.11 This non-toxic panel uses a chemical vapor deposition to place a thin silicon layer onto the glass, plastic or metal base.

Amorphous panels absorb a wide range of the light spectrum and perform well in low light. They can also be bent, making them less susceptible to cracks.  The downside to amorphous panels is that they lose efficiency quickly. Efficiency for amorphous solar cells is around 6% to 8%.12

Amorphous panels are an exciting look into the future of thin-film solar technology, but due to their low efficiency, they’re not effective for the average home. Currently, a-Si PV panels only produce a third of the energy a standard solar panel can. The tech can be found used in calculators, outdoor lights and small gadgets.

While amorphous silicon solar cells are the most well-developed, cadmium telluride (CdTe) panels are the most common type of thin-film modules available.These panels are actually the second most used type in the world, after crystalline silicon (c-Si) cells.13

Just as the name suggests, these cells are made with cadmium telluride, a chemical compound that is effective at capturing and converting sunlight into energy. CdTe panels are less expensive than standard silicon thin-film cells and have the quickest payback time of any other thin-film panels on the market today.14

Another benefit is that the cadmium telluride panels have the smallest carbon footprint of all film-thin panels available to consumers.15 Unfortunately, the huge problem with these solar panels is that they contain a large amount of cadmium, which is a toxic element.16 Special precautions need to be taken in order to deal with that component.

The panels are not harmful to humans or the environment during the manufacturing process or when being used to generate electricity on rooftops, but disposal of old panels continues to be of concern. Telluride is also very rare to find, which makes it difficult to mass-produce the technology.

Copper indium gallium selenide (CIGS) thin-film panels (try saying that five times fast!) are made by placing layers of copper, indium, gallium and diselenide on top of each other within conductive layers to create a powerful semiconductor. It can go on top of glass, plastic, steel or aluminum, depending on the desired use.

With such flexible backings, the thin layers can be used in a variety of ways that typical solar technology can’t. CIGS thin-film is a very efficient technology, with some efficiencies exceeding 20% in lab tests.17  Unfortunately, many CIGS panels also use cadmium — the toxic chemical found in cadmium telluride (CdTe) panels.

However, some current CIGS cells have swapped the chemical for eco-friendlier zinc oxides.18 Overall, the biggest disadvantage is found in the price tag. CIGS panels are still very expensive to produce, making it difficult for them to compete with CdTe or silicon solar panels.

The final type of thin-film solar panel is the organic photovoltaic (OPV) panel, which uses conductive organic polymers or small organic molecules in order to produce electricity. In these photovoltaic cells, several layers of thin organic vapor or solutions are placed between two electrodes to carry an electrical current.

The organic materials used are abundant, which gives the technology a lower price tag from manufacturing to market cost. Due to the variability in absorbers, OPV panels can be a range of colors — including transparent — which makes it the go-to solar module for any aesthetic needs. Despite the excitement over its aesthetic possibilities, OPV solar struggles with efficiency.

Typical cell efficiency is around 11%, which hampers its ability to be used in larger-scale operations. OPV also has a shorter lifespan than traditional and other thin-film technology currently on the market, and cell degradation is an ongoing struggle for organic PV cells.

The biggest difference between thin-film and traditional solar panels is that thin-film panels are not divided into cells like polycrystalline and monocrystalline modules. Instead of small silicon wafers, the entire surface has whole layers of photovoltaic material.

Since these panels use material layers instead of rigid cells, they can be manufactured to be low-cost, flexible and lightweight.  There are also adhesive thin-film panels, which can be used to stick onto windows and other vertical surfaces. These are popular for RV solar energy systems.

If you’re not sure which panels are right for your solar project, we recommend getting in contact with a local installer. After talking with a solar consultant, you’ll have a clear idea of which solar panels to purchase and how much they’ll cost.

Solar thin-film panels are an exciting look into the future of flexible and mobile solar technology. While they are not yet competitive with traditional solar products, the cells are showing potential. Due to low efficiencies and larger coverage areas needed, the panels are recommended for commercial and small-scale applications as opposed to for homes.

And their low price points are appealing, but the toxicity of one of the chemicals commonly used to make them — cadmium — is a bit high and can cause environmental damage once the PV modules are disposed of.

Here are some frequently asked questions about thin-film solar panels. If you have specific questions that aren’t answered here, reach out to our solar power experts at solar@ecowatch.com

Thin-film panels last 10 to 20 years, which is the shortest lifespan of the three types of solar panels.19 For what they lack in lifespan, they make up for in payback period. This means after installation, the amount of money you will have saved in electricity bills will pay back the cost of the system quickly.

Every panel is made of three main parts:

How thin-film solar panels are made depends on the photovoltaic substrate used in manufacturing. There are four main types of PV substrates that are used:

Once any of the above are placed between a conductive material and a layer of glass or plastic, the solar panel is ready to generate electricity.

When compared to monocrystalline and polycrystalline solar technology, thin-film has the lowest cost per panel. The specific price of a thin-film panel will depend on the brand and model. If you’re having an array installed, also keep in mind that your total installed cost of solar will include labor as well as components like inverters, racking, wiring and circuit breakers. Check out our article on the cost of solar panels to learn more.

Thin-film panels generally have a lower efficiency than monocrystalline and polycrystalline panels, which means you’ll need to cover a larger area to produce as much power as mono and poly cell technology. Therefore, thin-film panels are more suitable for large commercial and industrial rooftops or ground-mounted solar farms, where space is not a constraint.

They are not normally recommended for homes. However, if you’re looking for portable power or want flexible panels to install on something like an RV or boat canopy, thin-film panels will likely be the best for the job.

Companies like Sharp Solar and First Solar have large market shares in the thin-film solar industry. But you can get thin-film solar panels from many retailers, including on Amazon. 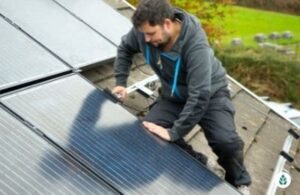