Solar: The Solution to America's Energy and Economic Crisis 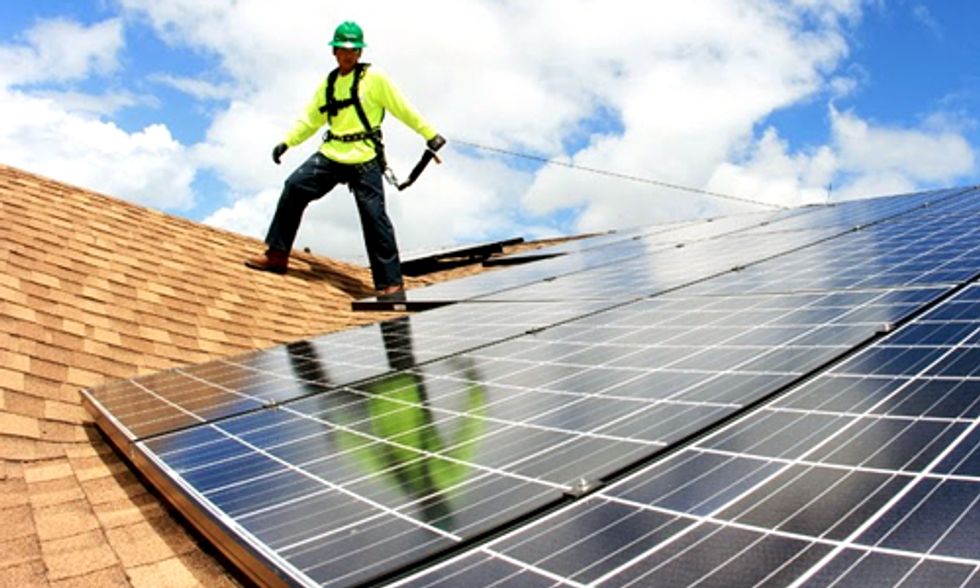 Rhone Resch, president and CEO of the Solar Energy Industries Association (SEIA), praised the rise of the solar energy sector while attempting to galvanize its stakeholders at the three-day Solar Power International 2013 event in Chicago.

Resch welcomed visitors to the gathering, which began Monday, with the following address:

"Since 2006, when the solar Investment Tax Credit first went into effect, we’ve gone from being an “upstart industry”—one that our critics predicted would fail miserably—to one of the fastest-growing industries in the United States, today employing 120,000 Americans at more than 6,000 companies from coast to coast and pumping billions of dollars in the U.S. economy.

When it’s all said and done, 2013 will go down as a record-shattering year for America’s solar energy industry. And if we’re smart—and we keep working together as a team in the future, speaking with one powerful voice—the best is yet to come.

You know it. I know it. And a lot of people in Washington, D.C. know it, too, including the President of the U.S.

This year, America heard us roar. By the end of this year, we expect to have 13 GW of cumulative solar electric capacity installed in the U.S.—enough to power more than 2 million American homes, including the White House!

But we are just beginning. Next year, it’s estimated that an additional 5.5 GW of PV and 700 MW of CSP will be installed, which is enough to power another 1 million homes across the nation. All totaled, we’re talking about the capacity very soon to power more than 3 million American homes.

To put that in some perspective, our industry—by the end of 2014—will be cranking out enough electricity to effectively power every home Delaware, Alaska, Hawaii, Maine, North Dakota, South Dakota, Rhode Island, Vermont and Wyoming combined.

But to be a true champion, you need to have “staying power.” Any way you look at it, that’s the real challenge for our industry moving forward. Our federal tax credit is set to expire at the end of 2016. And that’s why we need to work together, every single one of us, to extend the solar ITC past 2016—work that has to begin now, not six months before the law expires!

How many people in this room benefit either directly or indirectly from the solar ITC? That's right, everyone. Every single person in this industry benefits from the ITC. That's why we all need to step up and get involved.

We also need to pass commence construction language in Congress, expand Net Energy Metering, protect and expand Renewable Portfolio Standards in states all across the country and collectively promote the enormous societal benefits of using solar energy to the U.S. economy and to our world’s increasingly fragile environment.

You can be sure of one thing: If you don’t get involved and we as an industry don’t participate in a committed and shared effort, we will only make it that much easier for our critics and enemies to silence our roar.

Earlier this year, the Edison Electric Institute, which represents about 200 investor-owned electric companies, issued a white paper called “Disruptive Challenges.” Well, guess what was singled out as the biggest threat to electric utilities nationwide? Cybersecurity and terrorism? Nope. EPA Carbon Pollution Standards? Wrong again. How about rising energy prices? Not even mentioned.

Instead, EEI’s report singles out distributed generation and solar energy as its number one long-term threat. And since that report was published, utility CEOs around the country have been singing from the same song sheet—roll back net metering, institute fixed monthly charges for solar customers, protect us from consumer choice. They are aligned in their approach to dismantle net metering laws in this country.

Fortunately, we’re not in this fight alone. Today, 90 percent of Americans want to see an expanded use of solar. That’s right, 90 percent of utility customers want more solar. It’s time for utilities to start listening to their customers rather than their shareholders.

From the Heartland Institute—funded in large part by the Koch Brothers—to the ultra-conservative American Legislative Exchange Council, groups all across the U.S. are lined up to oppose an expansion of solar energy.

Simply put, our critics will do everything they can to make sure solar becomes nothing more than a footnote in history. We cannot let that happen. So buckle up and tighten your chin straps folks, we’ve got a lot of big challenges ahead of us.

Working together, we can—and we will—keep solar strong and growing.

So to the Climate Change Deniers out there and the card-carrying members of the Flat Earth Society, I’ll simply say this: Go ahead. See what happens when you grab the tail of a tiger!

And that’s one reason why SEIA and its member companies will soon be launching a new, nationwide “America Supports Solar” campaign. You can learn more by going to Americasupportssolar.org.

A key part of this exciting, multi-dimensional campaign is to reach out and educate our core audiences—Members of Congress and the White House, state legislators and governors, regulators and commissioners and our allies and advocates.

Think about it—nine out of 10 Americans support solar. We need to be shouting this from the rooftops and from every street corner.

To Main Street America, it’s easy to understand why solar energy is so important to our future. It’s a no-brainer.

Solar is clean, safe, affordable, reliable and abundant. It creates jobs, grows our economy, fosters U.S. innovation and powers our homes, schools and businesses. But, just as importantly, solar also offers freedom and security—the freedom to choose your own energy source based on your own individual needs, while at the same time, enhancing America’s national security by reducing our risky dependence on dirty sources of energy.

These are just a few reasons why America Supports Solar overwhelmingly. We need your help to make this campaign a huge success.

Another way we can come together is through our sister organization, The Solar Foundation, which also needs your help. Right now, The Solar Foundation is collecting data for the fourth Annual National Solar Jobs Census. Please make sure you complete the survey so we can compile the most up-to-date U.S. jobs numbers. This is critically important information to have as part of our argument when we’re talking to Members of Congress, regulators and state legislators around the country.

There’s some other good news that I want to share with you today. The annual Solar Means Business Report, which identifies major commercial solar projects and ranks America’s top corporate solar users, was just released by SEIA and Vote Solar.

And for the second year in a row, Walmart is America’s commercial solar leader with 89 MW installed at 215 locations.

These large companies are the top solar customers in the U.S. The numbers in red show capacity in megawatts, while blue shows the number of installations. Graphic credit: Solar Energy Industries Association

Today, the list of companies moving to clean, affordable solar energy reads like a ‘Who’s Who’ of the most successful corporations in America. Simply put, these iconic brands—from Apple to General Motors—are leading the way when it comes to efforts to transition to clean, renewable energy. By doing so, they’re helping to create thousands of American jobs, boost the U.S. economy and improve our environment. At the same time, they’re also reducing operating expenses, which benefits both their customers and shareholders.

Combined, these Top 25 companies have deployed 445 MW of solar capacity—a whopping 48 percent increase from one year ago.

And the growth of solar in the United States isn’t limited to commercial businesses – it’s spread across all sectors. For example, today there are nearly 40 utility-scale, clean energy solar projects under construction in the U.S.—utilizing both PV and CSP technologies—putting thousands of electricians, steelworkers and laborers to work, while also helping to reduce carbon emissions from power plants.

In addition, innovative solar heating and cooling systems are offering American consumers cost-efficient, effective options for meeting their energy needs, while lowering their utility bills. In fact, in the Solar Heating and Cooling Roadmap, prepared by SEIA, we outline an aggressive plan to install 100 million SHC panels in the United States by 2050. That action alone would create over 50,000 new American jobs and save more than $60 billion in future energy costs.

Meanwhile, the Solar Market Insight Report, produced by SEIA and GTM Research shows the U.S. installed 832 MW of new PV capacity in the second quarter of this year—with the U.S. residential solar market growing by almost 50 percent over Q2 2012.

So you can imagine our excitement when we learned that solar energy is once again helping to power the White House. Clearly, installing solar panels on the First Family’s official residence, arguably the most famous building in America, underscores the growing popularity of solar energy nationwide. There’s no billboard in the world better for your industry than 1600 Pennsylvania Avenue.

In some ways, this is like getting the Good Housekeeping Seal of Approval. SEIA put a bug in President Obama’s ear about installing solar panels on the White House when he first took office in 2009, and we’ve worked with a coalition to bring it up in every meeting since then. To see this finally happen is not only gratifying, but it also helps to highlight solar as a mainstream source of clean, abundant and affordable energy.

For years, there was only one real argument against solar: It was too expensive. That’s no longer the case. When President Carter was in office solar thermal applications dominated, and PV solar panels were, in fact, very costly and used primarily for off-grid and space applications. Since then, the cost of PV has plummeted by more than 97 percent and the industry has become one of the most innovative and entrepreneurial sectors of our economy.

This is what happens when we work together. Today, we’re creating thousands of new jobs, growing the U.S. economy, strengthening our nation’s long-term energy security and fighting climate change.

So in closing, thanks for everything you do to make clean, affordable solar energy an important part of our future—both for America, and the world.

But remember, for us to be successful over the long haul, it will take enhanced collaboration, dedication and teamwork. And as President Obama told us in his remarks—we need to fight for a brighter future.

The most important step you can take is to join this fight. Join us, become part of your industry’s trade association— join SEIA. If you’re not a member of national SEIA already, join now. We need your help and support if we’re going to have the resources necessary to win these important battles, which will determine the future of your business and the future of solar in America.

I’m reminded of something the legendary industrialist Henry Ford once said: