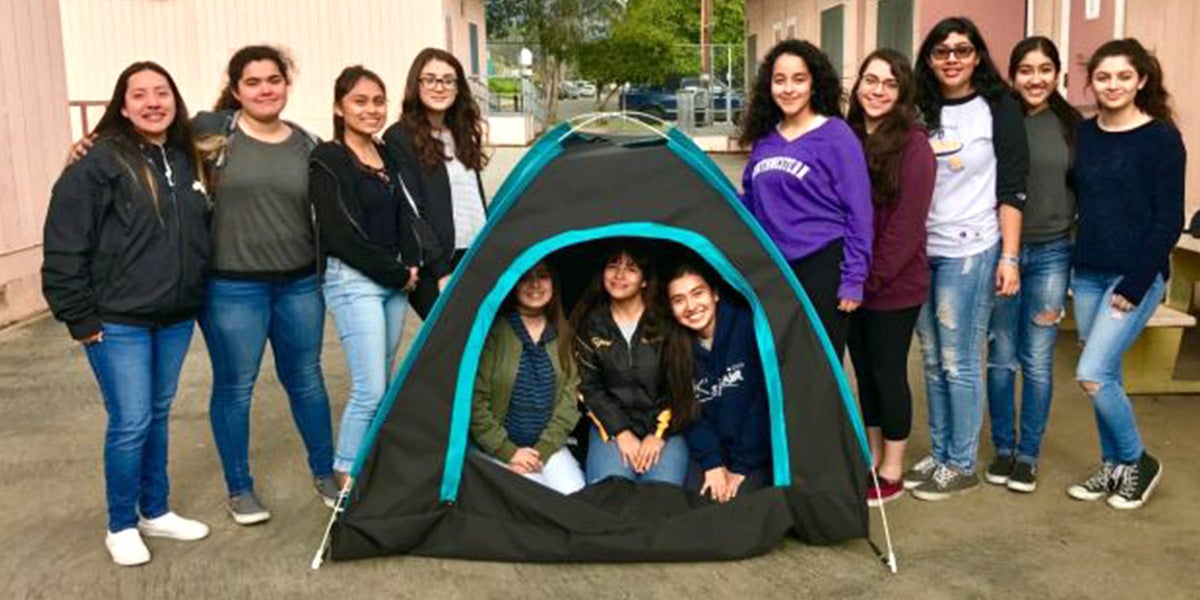 The girls of San Fernando High School with a prototype of their invention. GoFundMe / Violet Mardirosian

It’s a feat of scientific ingenuity that shows how much potential is squandered every day when girls aren’t encouraged to pursue STEM careers as much as boys traditionally have been. And it shows the astonishing imaginative reach of young people.

The girls had been invited by a teacher to come up with a science project to participate in the Lemelson-MIT Program, a highly competitive science fair for high schoolers. Most of them weren’t friends beforehand. But they all had common backgrounds and when they got together they knew they wanted to do something about the rising problem of homelessness in San Fernando, according to a profile in Mashable. Homelessness grew by 36 percent in the San Fernando Valley last year and many of the girls witness the suffering caused by this daily.

“Because we live here, we see it growing constantly,” Maggie Mejia, a student on the team, told Mashable. “If your parents miss X amount of bills, you can fall into homelessness, too.”

They tossed around ideas such as tackling pollution and water quality, but ultimately agreed that creating tents with power sources was the best solution.

Then DIY Girls, a nonprofit dedicated to unlocking the scientific potential of girls, began guiding them through the process of applying for grants.

After receiving a $10,000 grant from the Lemelson-MIT Program, the team got to work figuring out how to create a solar-powered tent and what that means exactly.

Starting from scratch was a struggle, but the team depended on early insights from DIY girls and soon realized that tutorials could be found online.

They learned how to sew, code, operate 3D printers and more through YouTube videos, Google searches and other platforms.

“You’re learning new things you’ve never even heard of or even thought of,” Chelly Chavez, a student on the team who learned coding languages for the tent’s technical aspects, told Mashable.

A hashtag was developed that captured their enterprising spirit: #wegetitdone.

Soon a prototype was developed and after working for a year, the team has a finished product that they’ll present at MIT in a competition with 14 other teams.

They were able to raise the funds for traveling to MIT through a GoFundMe.

The solar-powered tent has button-powered lights, USB ports, and a sanitizing UVC light. It features insulated fabric and has a safety locking system. Taking into account the vagrant experiences of most homeless people, the tent even collapses into a backpack that can be rolled around or worn with straps.

For the entire team, the experience has been transformative. Many will be the first in their families to go to college. They learned valuable skills. And all of them will be challenging a status quo that routinely denies STEM opportunities to women.

“Me and her, we’re the only two junior girls in our AP calculus class, which has way more guys than girls,” Paola Valtierra told Mashable. “But we’re gonna change that.”

Reposted with permission from Global Citizen.