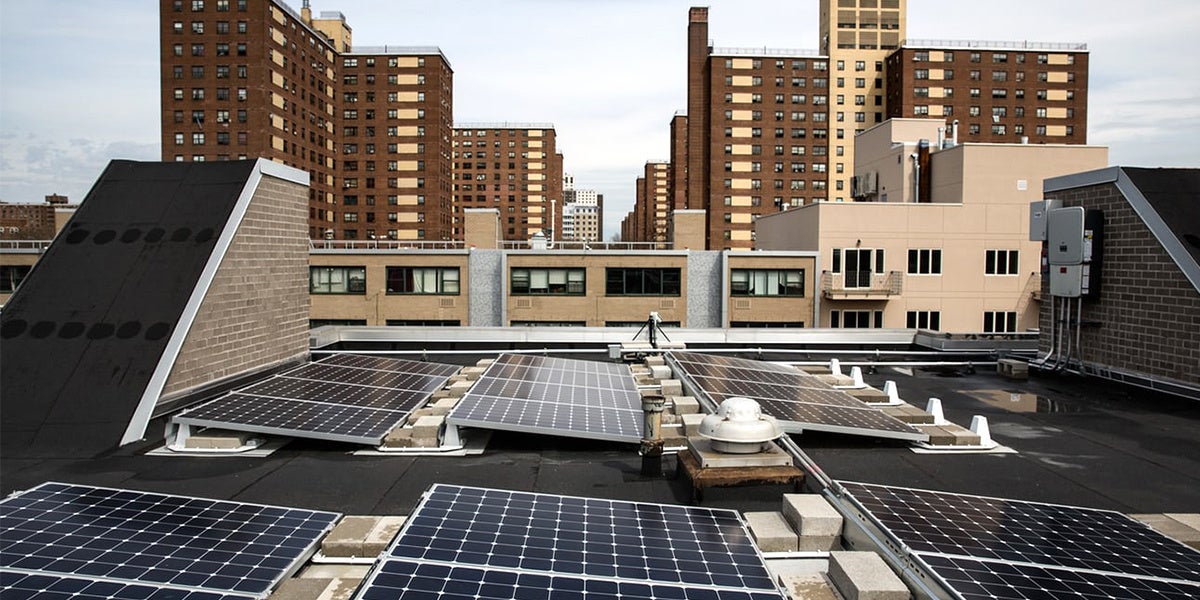 By Edward Barbier and Terry Iverson

President Donald Trump‘s decision to impose punitive duties on imported solar panels and related equipment is rankling most of the industry.

This was the final step of a process that began when two U.S. subsidiaries of foreign solar panel makers filed a rarely used kind of trade complaint with the International Trade Commission. Trump largely followed the course of action the independent U.S. agency had recommended to protect domestic manufacturers from unfair competition.

But far from protecting U.S. interests, the tariffs are bound to stifle the current solar boom, destroying American jobs and dragging down clean energy innovation. As economists who research climate and energy policies that can foster a greener North American economy, we argue the government should instead create targeted subsidies that support innovation and lower costs across the supply chain. This approach would do a better job of helping the U.S. industry fend off foreign competition without harming the industry itself. 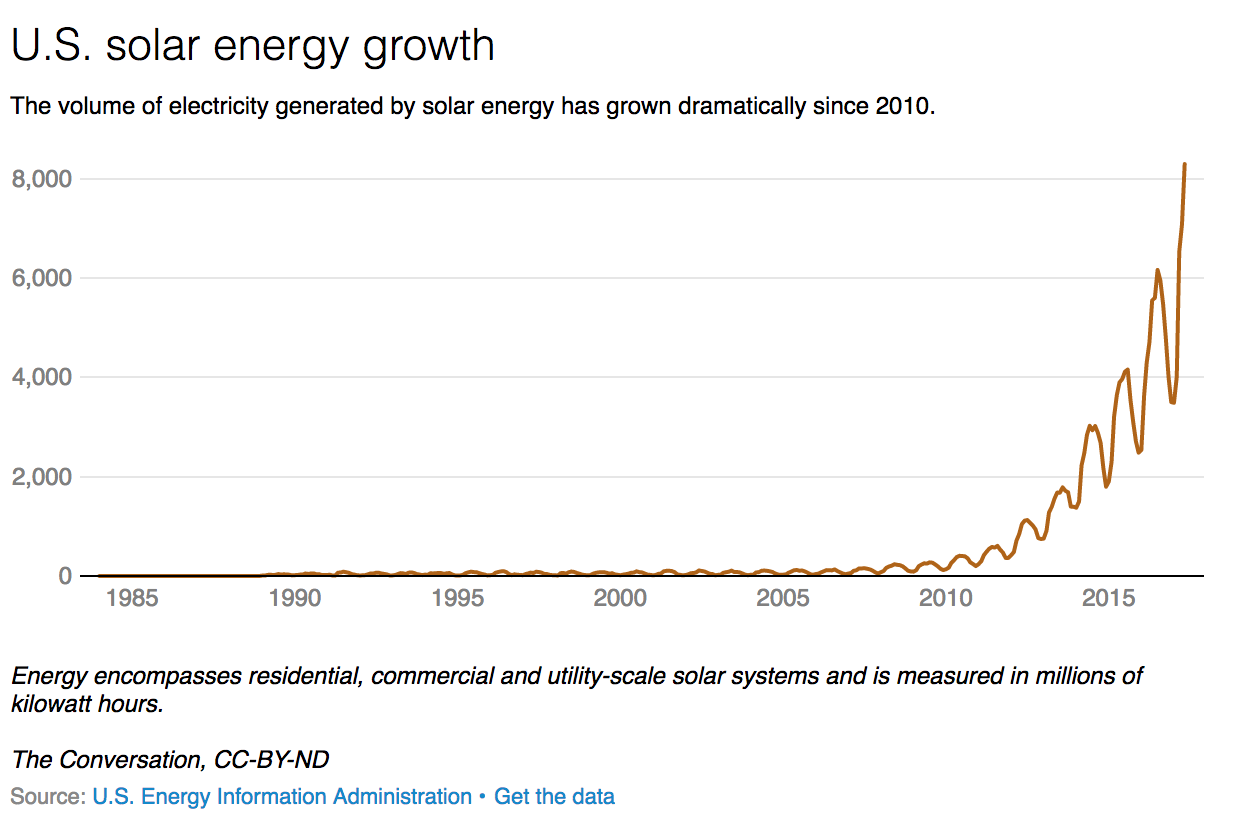 The U.S. solar industry has enjoyed unprecedented growth in recent years, thanks to the rapidly declining cost to install solar systems and tax breaks for homeowners, businesses and utilities that have expanded demand but are being phased out. Prices have plunged to roughly $1.50 per watt from around $6 in 2010 due to both innovation that made it less expensive to make panels anywhere and cheap imports.

The rapid decline in solar panel costs has been driven by policies in China and elsewhere intended to expand domestic manufacturing of these products.

The problem is not unique. Other countries dependent on cheap solar imports, including Germany and Canada, are also grappling with how to sustain the solar boom while protecting their own domestic manufacturers from unfair foreign competition.

The trade commission sent Trump its recommendations in the fall of 2017, giving him until Jan. 13 to accept or reject its guidance. Later, U.S. Trade Representative Robert Lighthizer asked the agency to draft a “supplemental” report, which effectively extended the president’s deadline for setting the tariffs.

The request, observers surmised, may have signaled concern about the this case’s potential to spiral into a broader trade dispute with China and other major U.S. trading partners.

That may explain why the duties imposed are not as steep as the maximum 35 percent rate the U.S. International Trade Commission had recommended. The tariffs will begin at 30 percent and then taper down in 5 percent increments over four years, ending at 15 percent in 2022. And they won’t apply to the first 2.5 gigawatts worth of imported solar cells, which domestic manufacturers use to build panels made in the U.S. 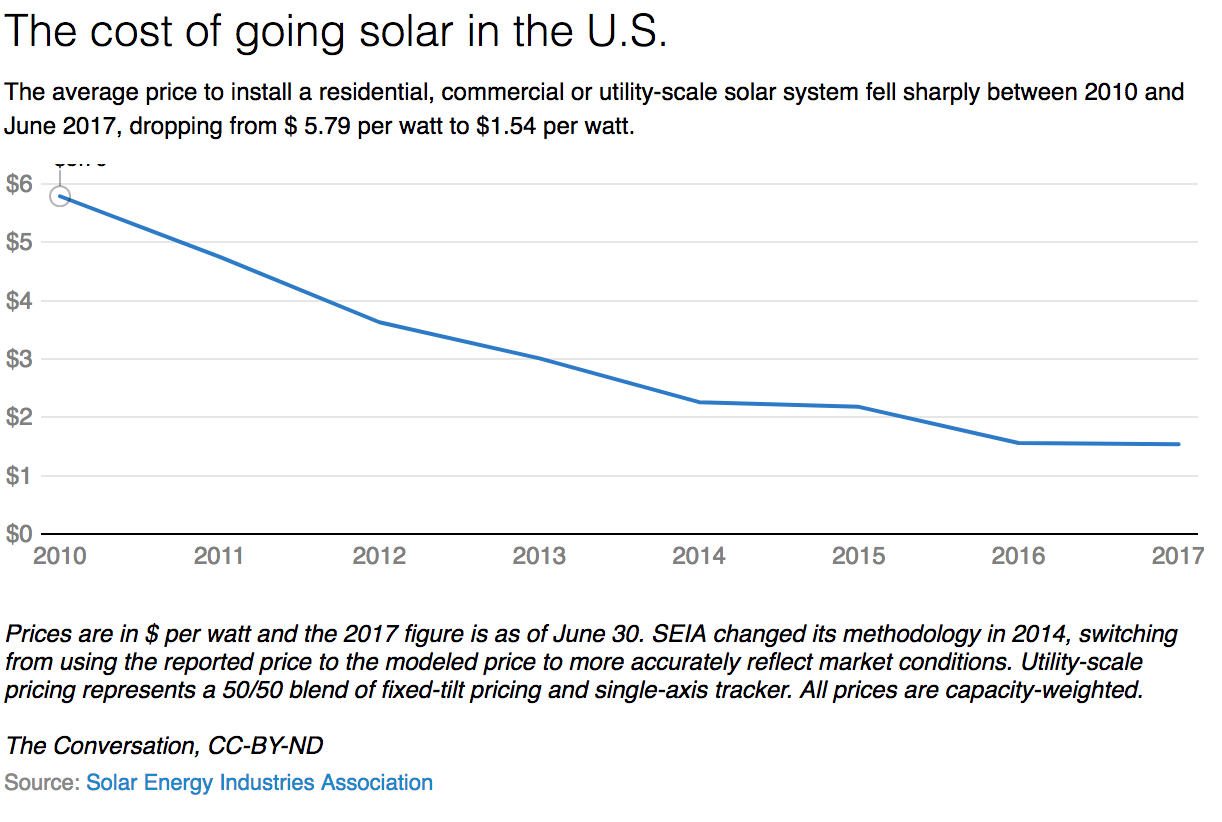 An uninterrupted solar boom would create even more jobs. The number of solar panel installers, for example, would more than double from 11,300 to 23,000 within 10 years at the current pace of growth, which would make it the fastest-growing profession, according to the Bureau of Labor Statistics. Another renewable energy mainstay, wind turbine technician, came in a close second.

Imposing tariffs on imported panels would cloud that outlook, largely because manufacturing accounts for less than 15 percent of U.S. solar jobs while installation amounts to more than half of them, according to the Solar Foundation’s annual census. If panels get more expensive, the cost to go solar will rise and demand will fall—along with the impetus to employ so many installers.

The Solar Energy Industries Association, a trade group that represents many companies in the industry, objected to the new duties, saying they could cost the industry 23,000 jobs in 2018. 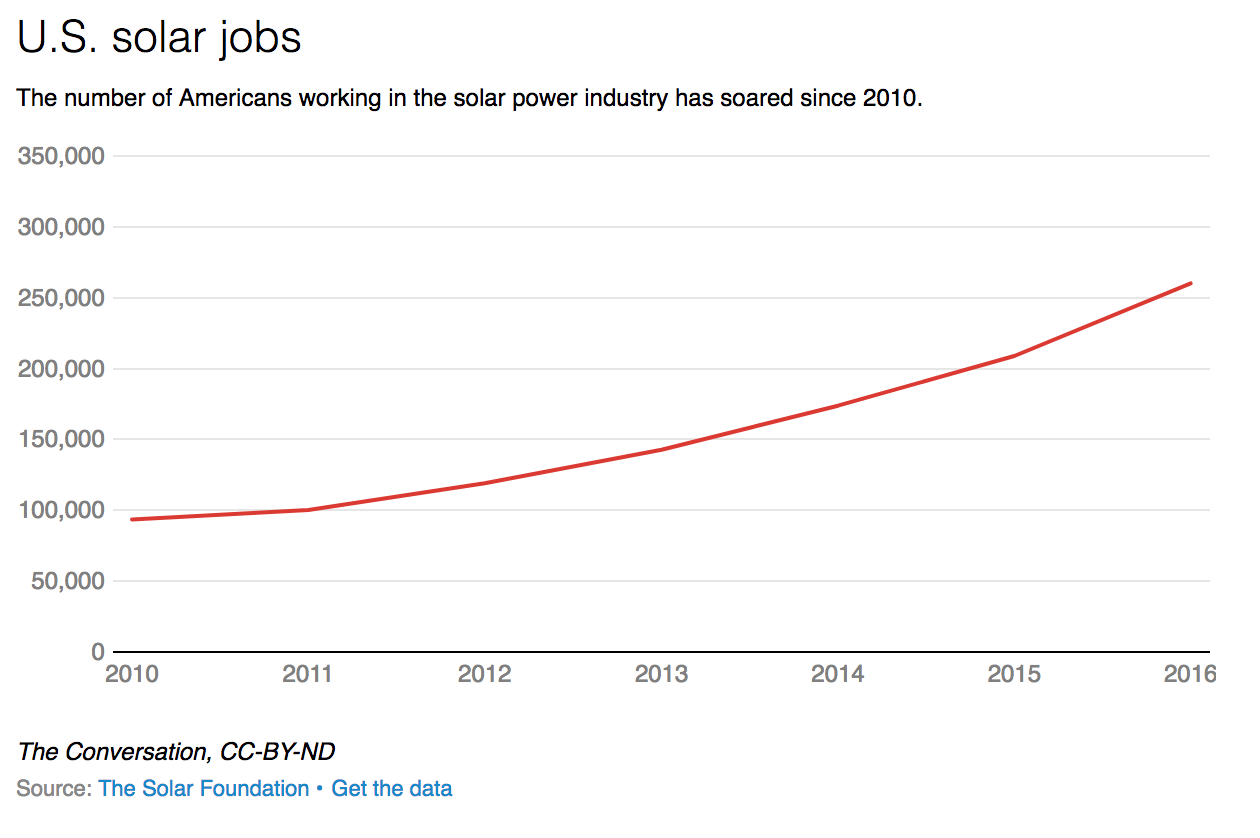 Despite the robust growth in wind and solar employment and its official support for an “all of the above” energy policy that combines fossil fuels, nuclear power, biofuels and renewable energy alternatives like wind and solar, the Trump administration has sought to slash support for alternative energy through the federal budget.

We agree that the government should encourage solar panel manufacturing within the nation’s borders. But there are better ways to support this important priority than by raising prices on imported equipment through punitive tariffs.

We believe the U.S. should follow suit. In addition to directing subsidies to reduce the costs of the solar supply chain, the government should also increase subsidies for private research and development for green innovation. Currently, federal financing for private solar R&D lags far behind levels seen in China and the European Union.

These subsidies could be funded by the tariffs the government was already collecting on solar panels imported from China and elsewhere before these new duties were considered.

If the U.S. government deems that additional restrictions are required, then it makes sense to follow a separate recommendation to freeze solar panel imports at 2016 market share levels. The government should then auction off the rights to import foreign solar panels to U.S. installers.

The government could spend the proceeds from these auctioned import licenses on domestic innovation and other efforts to cut supply chain costs for U.S. manufacturers of solar panels and related equipment.

While World Trade Organization rules limit the use of subsidies that explicitly promote a country’s exports in global markets, the ones we are proposing would likely be WTO-compliant.

This is because their aim is to make the U.S. solar industry more competitive within the domestic market, given the government’s earlier findings that cheap imported panels are being dumped—sold too cheaply—here.

Why Make an Exception?

Like most economists, we believe that subsidies should be avoided except in special circumstances. Here are three reasons why this industry is an exception.

First, when one nation subsidizes solar panel production and exports those panels, it makes it cheaper to go solar in other countries, effectively cutting the cost of implementing climate policies abroad.

Second, when solar energy replaces fossil fuels in one place, the declining carbon emissions benefit people around the globe. Climate change, after all, affects the entire world.

Third, R&D investments made in any one economy eventually add to the global knowledge base. Improving solar technology will ultimately benefit the entire industry worldwide.

The Trump administration’s solar tariffs will yield none of these benefits. In fact, they could instigate a trade war over clean energy products with our trading partners globally.

That is why we believe that the smarter subsidies we are proposing are a better way to sustain the U.S. solar industry and protect jobs.