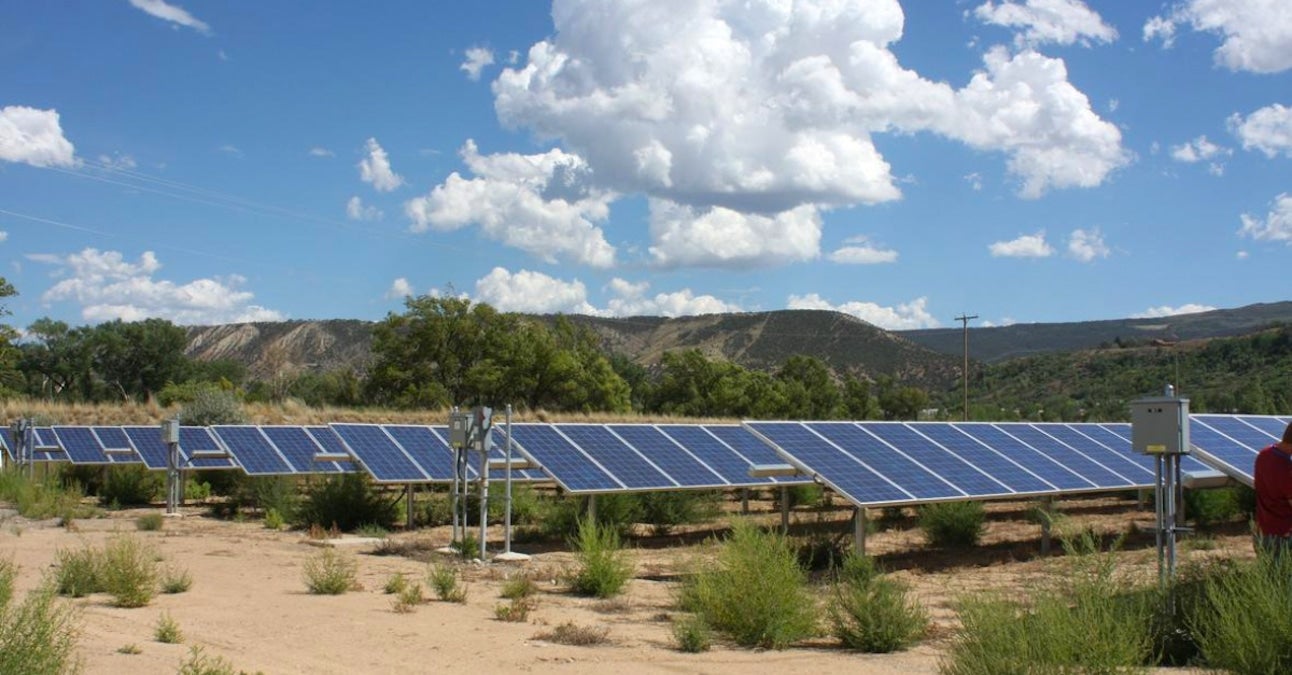 Solar panels in a field in Colorado. U.S. Department of the Interior

The Biden administration is looking to expand solar development on public lands to meet its clean energy goals.

The Department of the Interior (DOI) announced Monday that the Bureau of Land Management (BLM) would update Obama-era guidelines for solar installations on federal property as well as launch reviews of three solar projects proposed for Arizona.

“This Administration is committed to expanding clean energy development to address climate change, enhance America’s energy security and provide for good-paying union jobs,” Secretary of the Interior Deb Haaland said in a statement. “Our review of these proposed projects in Arizona, and a new analysis of the role public lands can play in furthering solar energy production, will help ensure we keep the momentum going to build a clean energy future, lower costs for families and create robust conservation outcomes on the nation’s lands and waters.”

President Joe Biden has set a goal of decarbonizing the U.S. electric grid by 2035. As part of this, his administration has set targets for increasing the renewable energy capacity on public lands, promising almost 10,000 megawatts (MW) of new capacity by next year, nearly double the current levels. The DOI further wants to permit 25 gigawatts (GW) of renewable energy by 2025.

However, both solar and wind developers say that it is easier to launch projects on private lands because it is cheaper and the permitting process is less complicated, Reuters reported.

To address these concerns, BLM said Monday it would update something called the Solar Programmatic Environmental Impact Statement (PEIS). This was first finalized in 2012 under President Barack Obama and outlined guidelines for utility scale solar permitting in six Western states: Arizona, California, Colorado, Nevada, New Mexico and Utah, as the DOI reported at the time. The initial guidelines earmarked around 285,000 acres of public lands as 17 Solar Energy Zones where commercial-scale solar development would be prioritized.

BLM updates to the Solar PEIS could include the addition of new states, the identification of new priority areas and changing the criteria for excluding solar development from certain areas, DOI said Monday.

“We take seriously our responsibility to manage the nation’s public lands responsibly and with an eye toward the increasing impacts of the climate crisis. The power and potential of the clean energy future is an undeniable and critical part of that work,” Principal Deputy Assistant Secretary for Land and Minerals Management Laura Daniel-Davis said in Monday’s statement. “The Bureau of Land Management is working diligently to ensure that its processes and pace maintain the momentum we are seeing from industry.”

Speaking at the Sonoran Solar Energy Project in Arizona, Haaland and Daniel-Davis also said the BLM would start reviews of three additional Arizona solar projects. These are:

Together, the three projects could add a total of one GW of renewable energy to the grid.

So far, the solar industry has seemed pleased with Monday’s announcement.

BLM will post on the Federal Register about its efforts to update the Solar PEIS in the coming days, and then the public will have 60 days to comment. Based on feedback from stakeholders, BLM will then develop a draft programmatic environmental impact statement for further comment.

Exxon Wallows in Record-Breaking Profits in 2022
What could dwarf Chevron's biggest-ever profits of $35.5 billion in
By Climate Nexus
Biden’s EPA Protects Alaska’s Bristol Bay From Controversial Pebble Mine
The watershed of Bristol Bay, Alaska, is home to the
By Olivia Rosane
Study Using AI Warns We Are 10 to 15 Years From Breaching 1.5°C Paris Agreement Goal
A new study using artificial intelligence (AI) to forecast global
By Cristen Hemingway Jaynes