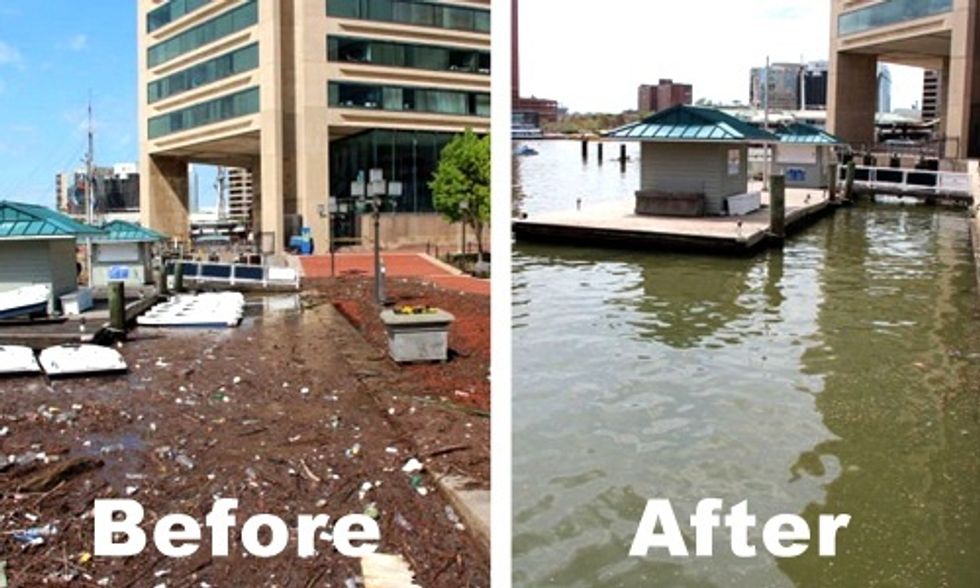 They say you can't reinvent the wheel, but in May 2014, the Waterfront Partnership did just that. The Baltimore nonprofit installed "the world's first permanent water wheel trash interceptor" to clean up the city's polluted Inner Harbor.

The wheel, which is powered by solar panels and water currents, has pulled a whole lot of trash from the harbor in less than two years. As recently reported by Waste Dive, the $750,000 floating trash guzzler has removed more than 350 tons of litter from Baltimore's landmark and tourist attraction to date.

Affectionately known as Mr. Trash Wheel, the floating contraption has the capability to collect 50,000 pounds of trash per day.

#TransformationTuesday This is what the harbor used to look like after a rain storm before I arrived on the scene. https://t.co/ADQe7NzYgh
— Mr. Trash Wheel (@Mr. Trash Wheel)1447870851.0

As EcoWatch reported, the wheel receives power from Jones Falls River's current near the harbor, which turns the wheel and lifts trash from the water into a dumpster barge. An array of 30 solar panels keeps the wheel turning when the water current isn't enough.

This video from NBC News explains how the water wheel works and how the it could be the solution for cleaning trash pollution in waterways around the world:

Officials from Singapore, Rio and nearly 30 U.S. cities, including Philadelphia and Honolulu, have called Baltimore to learn about the wheel, Waste Dive reported.

"Our primary goal was to keep trash out of the Harbor and Chesapeake Bay and ultimately support an initiative to make the Harbor swimmable and fishable by 2020," Adam Lindquist, director of the Waterfront Partnership-launched Healthy Harbor Initiative, told Waste Dive.

Still, it will take great strides to make the harbor actually swimmable and fishable in less than five years. In June, the Waterfront Partnership and Blue Water Baltimore graded the harbor an overall "F" in their 2014 Healthy Harbor Report Card.

According to the Baltimore Biz Journal, the high level of fecal bacteria pollution, which comes from sewer overflows and poor stormwater infrastructure, makes the harbor "hundreds of times higher than what is considered safe for human contact."

The Report Card did however acknowledge projects that have improved water quality, with the water wheel being one of them.

"A number of projects are going on in Baltimore City and County that should result in better water quality scores," according to a press release. "Four of these projects, that are detailed in the report card, include the Blue Alleys project, the Water Wheel, expanded street sweeping and stream restoration."