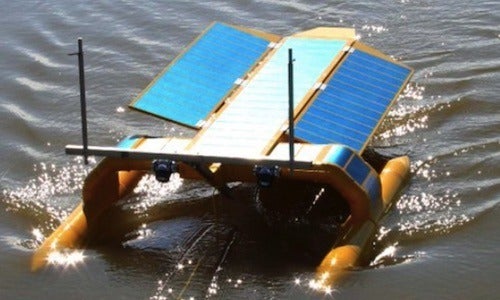 With more plastic than fish expected in our oceans by 2050, cleaning up this mess seems like an impossible task. But a team of inventors from Sussex, England have developed a novel solution. The SeaVax is a solar- and wind-powered ship that can suck up plastic waste.

The inventors at Bluebird Marine Systems LTD unveiled their proof of concept at the government-funded Innovate UK show in London in November. The inventors are entering prototype phase, the Express reported.

The ship purportedly works by funneling plastic waste as it moves forward. According to this mockup posted to the Innovate UK website, once built, the vessel will be around 144 feet long and fully autonomous. Deck-mounted solar panels and two wind turbines will feed power to electric pumps and filters that can suck up plastic solids and micro plastics. An onboard shredder rips and breaks up larger pieces of debris.

The builders calculated on their website that the finished robovac will be able to generate enough energy to treat an average of 89.9 million liters of seawater in a year, translating to 22,400,000 kilograms of plastic from a body of water that has high concentrations of surface solid plastic, such as river estuaries.

“Working in a fleet, these autonomous robotic boats could keep plastic buildup contained and significantly reduce the existing ocean gyres in around 5-10 years, cost effectively,” the inventors said.

The captured plastic is temporarily stored in a cargo hold that can carry around 150 tons of weight until it can be off-loaded or recycled, the inventors said.

“With our system all sizes of rubbish, from huge fishing nets to deadly micro particles, can be swept or sucked up, ground down and stored in SeaVax’s tanks,” project director Chris Close explained to the Express.

There are various ocean cleanup projects already underway, but Dr. Marcus Eriksen, research director at 5 Gyres Institute, explained to EcoWatch that many of the open ocean techno-fixes have died down in the last five years.

It’s “mostly because the science of plastic pollution tells us plastics fragment quickly, are mostly small particles widely distributed across the globe and are highly toxic after time at sea—more akin to a smog of plastic rather than a consolidated patch,” he said. “Recovery is much more challenging than we thought, and the ocean is rapidly beaching it and sinking the smallest particles.”

Dr. Eriksen also pointed out that by-catch and the unintended killing of passively floating organisms that can’t swim away is a big issue around any cleanup contraption.

Another issue, he said, is the “PR challenge of not letting post-consumer cleanup distract the attention of the public and policymakers from circular economy thinking, like upstream design innovations and policy intervention that prevent the problem in the first place.”

For what it’s worth, Bluebird Marine Systems said their finished SeaVax will feature automatic shutdown in case marine life is detected, as well as an SOS beacon to alert rescue workers of any marine life-threatening situations.

The company also said on their website, “We agree with most others, that we must begin to look closer to home, to try to prevent our rivers from feeding the oceans in the first place—and we should use less plastic for packaging.”

“Catching that before it fragments into microplastic is worthy,” he said. “The biggest advantage to these clean-up contraptions is deployment upstream. That’s where the waste really is the worst. You’ll get your biggest bang for your buck, and you will save our seas from the greatest source of contamination. The further upstream you go, the more success you will have.”

According to the Express, Bluebird Marine Systems has already received interest from people in India trying to develop a clean-up solution for the polluted Ganges river. There was also interest from Nigeria and Australia who might want to use the device for oil cleanup.