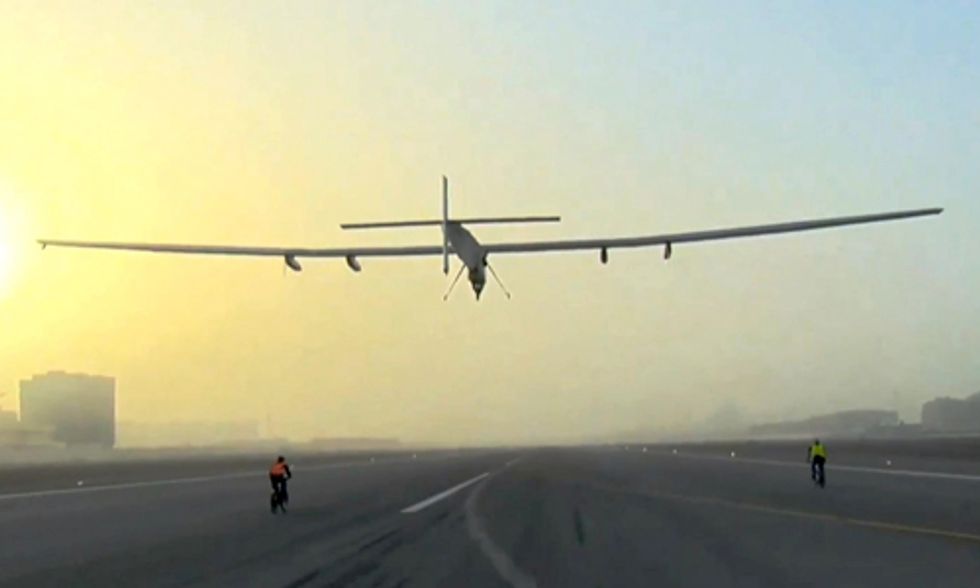 Solar Impulse 2, the first solar airplane able to sustain flight at night with a pilot on board, took off today from Abu Dhabi, heading east to the Omani capital, Muscat. Over the next five months, if all goes to plan, the plane will go from continent to continent, crossing both the Pacific and the Atlantic oceans. The plane will stop to receive maintenance and, during that time, the project's backers, which include Richard Branson and Robert Swan, will spread awareness about renewable technologies.

If the project is successful, it will be the first solar powered plane to circumnavigate the globe.

The launch of the project was announced in November 2003, almost exactly a century after the Wright brothers’ historic flight. The team began work soon after that. The plane went on its first test flights in 2010, and in July of that year, it made the first night flight in the history of solar aviation, lasting more than 26 hours. It took progressively longer flights, including a trip across the U.S., leading up to this trip.

Before taking off, pilot Andre Borschberg told BBC News: "I am confident we have a very special aeroplane, and it will have to be to get us across the big oceans." Monday's leg to Oman will cover about 250 miles and take an estimated 12 hours, according to the BBC. Its average speed will only be about 43 miles per hour, hence the long flight time. It may not be breaking any records for speed, but it has already broken many records (basically, anytime it does anything it sets a record), and if it's successful, it will be the first solar powered plane to circumnavigate the globe.

The 21,747-mile trip, which is expected to take about four months, will be split into 12 legs. Photo credit: Solar Impulse

It is not at all certain Solar Impulse will be a success. The plane's team is worried about ocean crossings, which will be very weather-dependent. The 21,747-mile trip, which is expected to take about four months, will be split into 12 legs. The trips across the ocean will take almost six days, putting quite a mental and physical strain on the pilots. The cockpit is only 3.8 cubic meters in size and the pilots are only allowed to take 20-minute naps.

Nevertheless, this is a very exciting moment for solar, which could be the largest source of electricity by 2050, according to a report from last fall by the International Energy Agency. It's a dream come true for the plane's other pilot, Bertrand Piccard, who will rotate with Borschberg. "I had this dream 16 years ago of flying around the world without fuel, just on solar power," Piccard told BBC News. "Now, we're about to do it. The passion is there and I look forward so much to being in the cockpit."

The Solar Impulse team hopes the projects can be "implemented in daily life, for cars or for heating systems or for the construction of houses," Piccard told National Geographic. "All the technology exists; we should use it much more in our daily life.”

Watch the plane take off in Abu Dhabi:

Meet the ‘Merchants of Doubt': Spin Doctors Obscuring the Truth on Climate Change