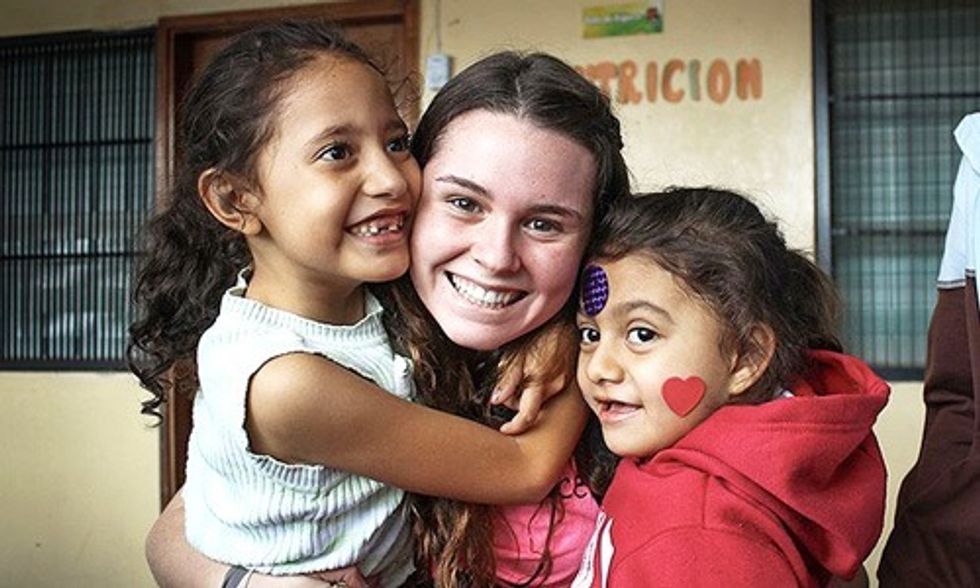 Grace O’Brien’s motto has always been, “I don’t know what I want to be, but I want to be something great. Meaning, I want to make sure that whatever I choose to do, it’s making a positive impact.”

So far, the 18-year old Stanford freshman is off to a pretty good start. At 14, she founded the nonprofit Ears for Years, which has supplied hundreds of low-cost, solar-powered hearing aids to children in developing countries. And O’Brien has already received national attention as one of the 2015 winners of the Gloria Barron Prize for Young Heroes.

When she was growing up, O’Brien says, her family was very service-minded. She often spent Sunday mornings serving food at a local homeless shelter or making blankets for hospitals with her sisters. But the issue of hearing loss really hit home when her father developed a brain tumor and suffered some hearing loss, making communication difficult. Later, while looking for a summer volunteer position, she discovered a theater camp for deaf children.

“I knew it was the perfect place for me to integrate my love for theater and volunteering,” O’Brien says. “As I worked with the kids over the summer, I realized how important hearing aids were to many of the children's ability to learn and communicate. I became more involved in the deaf community that summer, and I discovered that there are roughly 30 million hard-of-hearing children in developing countries who could benefit from a hearing aid but don’t have access to one.”

According to the World Health Organization, of the 360 million people around the world who suffer from hearing loss, 32 million are children, and the majority are in developing countries.

“I wanted to find a sustainable and affordable solution, so when I came across Solar Ear, I knew I had to work with them,” O’Brien says. “I reached out to the founder of Solar Ear, Howard Weinstein, and we realized many of our goals were aligned, so it seemed like a perfect fit to work together. My friends and family served as pillars of support, helping me arrange fund-raisers and get the word out. I also created a club at my high school.”

Founded in 2003, Solar Ear seeks to address not only the high cost of hearing aids in developing countries, but also the difficulty and high cost of keeping them charged. Standard hearing aids can cost as much as $1,000, require constant battery changes and don’t have a long life span. The Solar Ear device is $100, has a three-year life span and includes rechargeable batteries that use a solar-powered charger. The charger can also be plugged into a light socket to recharge.

“In the developing world, people lucky enough to own a hearing aid either can’t get hold of or can’t afford the batteries which, by the way, they have to replace once a week,” Weinstein told the World Health Organization. “So the devices end up on a shelf somewhere or in the kitchen drawer.”

“We could have patented the Solar Ear charger in a heartbeat, but we wanted people to copy us,” Weinstein said. “In fact, if somebody ends up producing a cheaper, better version of the Solar Ear and uses their distribution channel to get more products to more children with hearing loss, we will have attained our objective—even if that puts us out of business.”

So far, Solar Ear has gone into production in Brazil, China, Mexico, Russia and Singapore, with one condition from Weinstein: that deaf people be involved in making them.

“Hearing aids can be an essential tool for communication for someone who is hard of hearing,” says O’Brien, “so I think it’s important for children who need them to have them, to retain information, get a valid education and have a chance at building a better life for themselves.”

O’Brien explains that many developing countries don’t have special schools or accommodations for deaf children, so it can be difficult for them to learn and interact with their peers.

“I believe every child should be given the tools they need to get a valid education,” she says, “and for hard-of-hearing children, that tool set might be a little different.”

“Many people don’t know what causes deafness,” she says, “so explaining it can help to prevent and eradicate prejudices.” Among children, chronic otitis media, meaning a long-standing ear infection, is the leading cause of hearing impairment.

While O’Brien hopes to continue providing deaf and hard-of-hearing children around the world with hearing aids, she’s casting a much wider net for her future.

“By spreading the word and fighting for people with disabilities, I hope I can find ways to convince countries that don’t already have accommodations to implement programs and accommodations for children with disabilities,” she says. “I’m still young, and my life has the potential to take many different paths, but wherever I go, I want to make sure I’m making a positive difference.”

Two decades ago scientists and volunteers along the Virginia coast started tossing seagrass seeds into barren seaside lagoons. Disease and an intense hurricane had wiped out the plants in the 1930s, and no nearby meadows could serve as a naturally dispersing source of seeds to bring them back.

Carbon dioxide levels in the atmosphere hit a new record in 2019 and have continued climbing this year, despite lockdowns and other measures to curb the pandemic, the World Meteorological Organization (WMO) said on Monday, citing preliminary data.

These black-and-white lizards could be the punchline of a joke, except the situation is no laughing matter.

September in Portland, Oregon, usually brings a slight chill to the air and an orange tinge to the leaves. This year, it brought smoke so thick it burned your throat and made your eyes strain to see more than 20 feet in front of you.

Carly Nairn
Animals
A rare rusty-spotted cat is spotted in the wild in 2015. David V. Raju / Wikimedia Commons / CC by 4.0

Misunderstanding the needs of how to protect three rare cat species in Southeast Asia may be a driving factor in their extinction, according to a recent study.