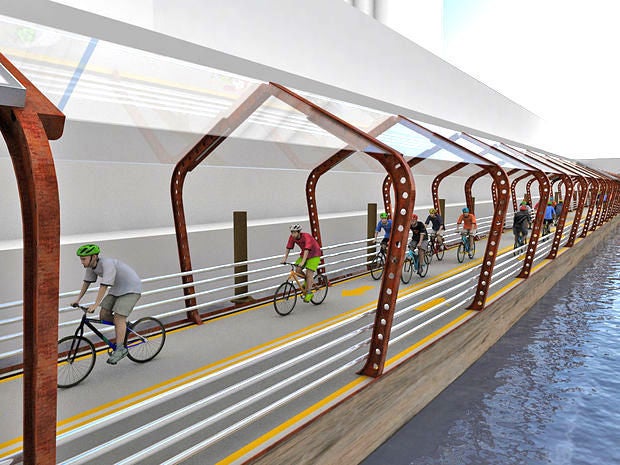 Chicago—the
most bike-friendly city in the U.S.—might be building a floating, solar-powered bike path atop its eponymous river to help bicyclists navigate the waterway 24/7.

A floating bike trail on the Chicago River? Here's what it could look like https://t.co/oQQlEsb4Y3 pic.twitter.com/fHLTe9RTqO

This is not your average bike path. Instead of one long continuous road, the RiverRide consists of steel-reinforced concrete pontoon segments developed by Marinetek, an international company that builds floating structures. Like Legos, the floating segments can be daisy chained together or taken apart if reconfiguration is necessary.

Chuck said that each segment would measure 82 feet long and 6-12 feet wide. The proposed car-free trail will float on the Chicago River between Horner and Ping Tom Parks.

As DNAinfo Chicago noted, the idea of a floating walkway is not new—cities like Portland and Philadelphia already have their own floating paths that allow folks to get from A to B over bodies of water. However, what makes the RiverRide special is that Windy City bikers would be able navigate the Chicago River at night and even when it snows.

The RiverRide design incorporates solar panels above each floating segment to provide light even after the sun sets. Additionally, precipitation-activated awnings and an embedded heating conduit will prevent icing and snow build-up.

Chuck said that it would cost approximately $5 million to $10 million per mile of floating trail, which could come from public or private funding. He is reportedly working to gain support for RiverRide pilot segments, and if approved, they could be installed by summer 2018.

According to DNAinfo Chicago, some Transportation Action Committee members questioned some aspects of the proposal, such as the awning and the segments’ narrow width. But in some good news for the company, 33rd Ward alderman Deb Mell tweeted a link to the DNAinfo story and wrote that she hopes to pilot the bike trail in her ward.