Save on Energy Costs With This DIY Solar Oven 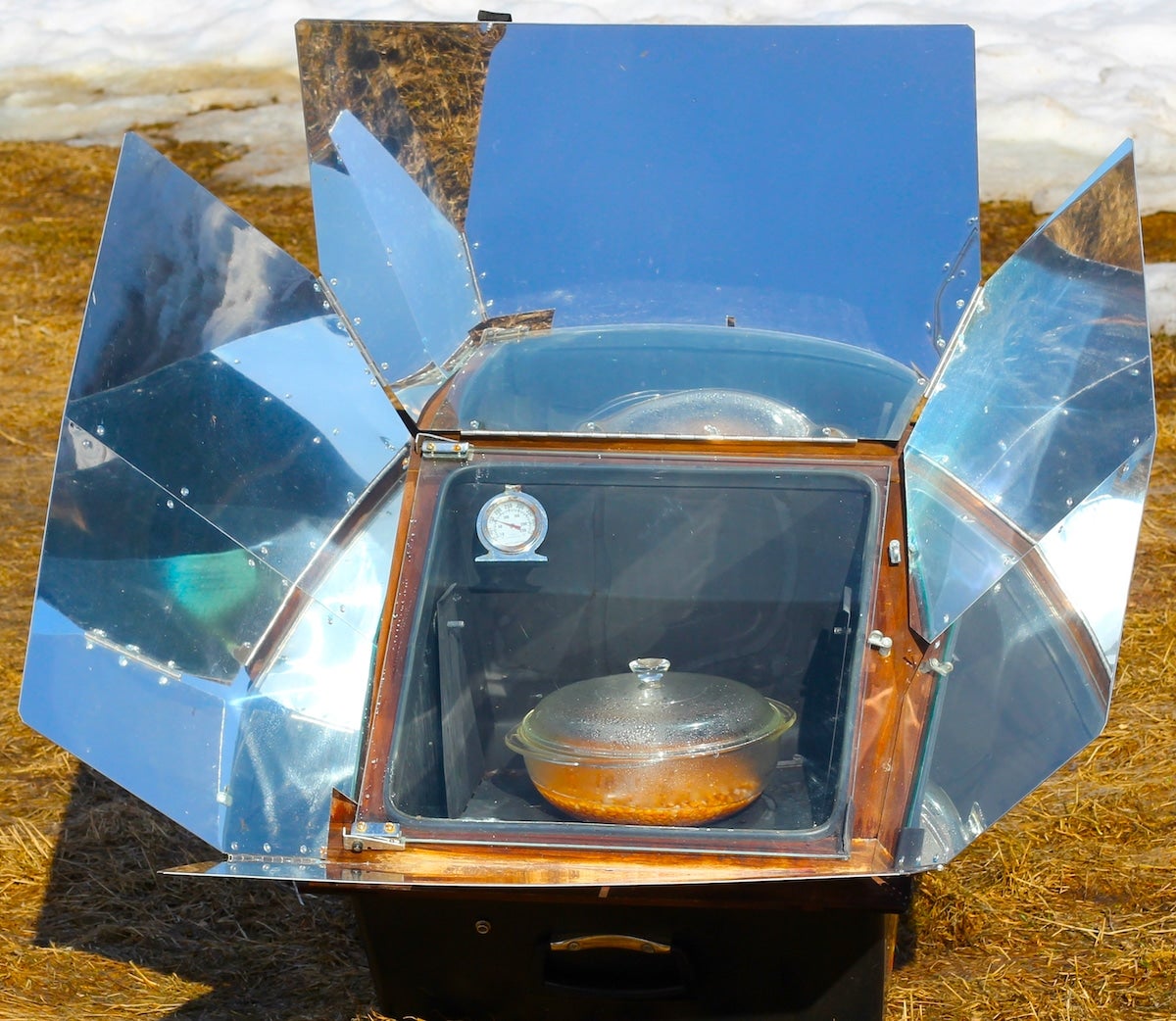 It’s no secret that the cost of fracked gas has skyrocketed. If you’re looking for ways to save money on energy costs this winter, turn to the sun. Solar ovens aren’t just a fun science project, but a legitimate way to cook outdoors, even during the coldest months. The average electric oven/stove contributes roughly $150 a year to your electricity bill, while a DIY box cooker can be made for free with a few supplies you probably already have on hand.

How Does Solar Cooking Work?

Using a reflective surface like aluminum foil or reflective insulation, solar ovens work by redirecting UV rays from the sun onto the food inside. A clear cover — either transparent plastic or glass — over the open top of the box acts like a greenhouse, trapping heat that enters. Dark colors absorb heat better, so a black bottom and black cookware further raise the temperature of the box, as does a layer of insulation on all sides.

When made and used correctly, a homemade solar oven can reach temperatures of up to 200-300ºF: roughly the same as a slow cooker. Commercially-made solar ovens can get as hot as 400ºF! A DIY oven is sufficient for cooking small things even at lower temperatures; heat up leftover pizza, bake cookies, or melt cheese over nachos. If you can get the temperature higher, you’ll be able to make all kinds of dishes like those you’d make in a slow cooker. At 300ºF, the oven is even safe for cooking meat (although you should monitor the temperature closely).

Solar ovens do, however, take more time than a conventional oven or stove. You’ll need to treat it like a slow cooker and plan further ahead when cooking meals. Regardless of design, solar cookers need the right conditions in order to function, with bright sunshine hitting the box directly, making them unsuitable for certain climates.

Why Build a Solar Oven?

Our use of coal, oil, and fracked gas for electricity is contributing to climate change, pollution, and habitat destruction. A new study revealed that we cannot limit global warming to 1.5ºC — which scientists cite as the threshold for preventing the worst impacts of the climate crisis — while also developing more oil and gas infrastructure. To prevent such catastrophic warming, we’ll need to curb our usage somehow, and while this is a larger, systematic issue, consumers can still take steps to limit their own energy use. Harnessing the power of the sun to cook saves energy — and the money you’d spend on that energy.

Cooking and baking with a solar oven is also safer than using a conventional oven. They are less hazardous, and don’t create any indoor air pollution, which is common with gas stoves. They’re also great for the summer when an indoor oven only heats up an already-hot kitchen. Some smaller, portable solar oven models can be packed and carried on camping or backpacking trips; under the right, sunny conditions, you can still make s’mores and hot camp food in areas with fire bans.

There are several solar oven designs that you can make at home, but the box cooker is the simplest, made with materials you likely already have.

To allow light into the box, you’ll need to make a window. Use cardboard to make a frame the size of the top of the box. Leave an inch or so of cardboard around the sides, and cover the middle with plastic wrap, using tape or paper clips to hold it down. You’ll be able to place this window right on top of the box and easily lift it to access the food inside. Or, use a piece of cardboard for the frame that’s larger than the box. Fold down the sides over the edges of the box so there’s no gap to allow cold air in. You can also use a sheet of glass or plexiglass instead of plastic wrap for even better insulation.

If you’re using a pizza box, this step is a bit easier. Draw a square on the lid of the box, then cut out three sides, leaving the back side intact. Fold this up and tape Saran wrap over the square opening. You’ll be able to lift the lid up without removing the plastic.

Much like an oven, insulation will help the box cooker retain heat. Insulate the four walls of the box with your material of choice. Alternatively, place a smaller box inside of a larger one and fill the gap between them with insulation (newspaper works well using this method).

Cover the bottom of the box with black construction paper. To further aid heating, use a black pan while cooking, such as a cast iron pot or skillet.

Prop up the flaps of the box — with sticks, pipe, bamboo plant rods, or anything else you have — so they make a 45º angle with the sides of the box; they’ll be able to capture the sun and reflect it down into the box. Position the box somewhere that receives direct sunlight in the backyard, on the stoop, a fire escape, or rooftop. For the greatest success, set up the box between the hours of 11 a.m. and 3 p.m. when the sun is directly overhead.

A kitchen thermometer will help you know the temperature inside the box, which is especially important for foods that need to be cooked through. Place it somewhere you can see through the window so you won’t have to open it up to check the temperature, letting the cold air in.

The basic box cooker model is the simplest solar oven, but there are other highly efficient models with more complicated designs. A panel cooker places a pot inside an oven bag in the middle of several reflective panels, enabling it to reach temperatures high enough to boil water. Parabolic cookers create the highest temperatures (up to 500ºF under the right conditions) using a parabolic mirror and direct all sunlight to one point.