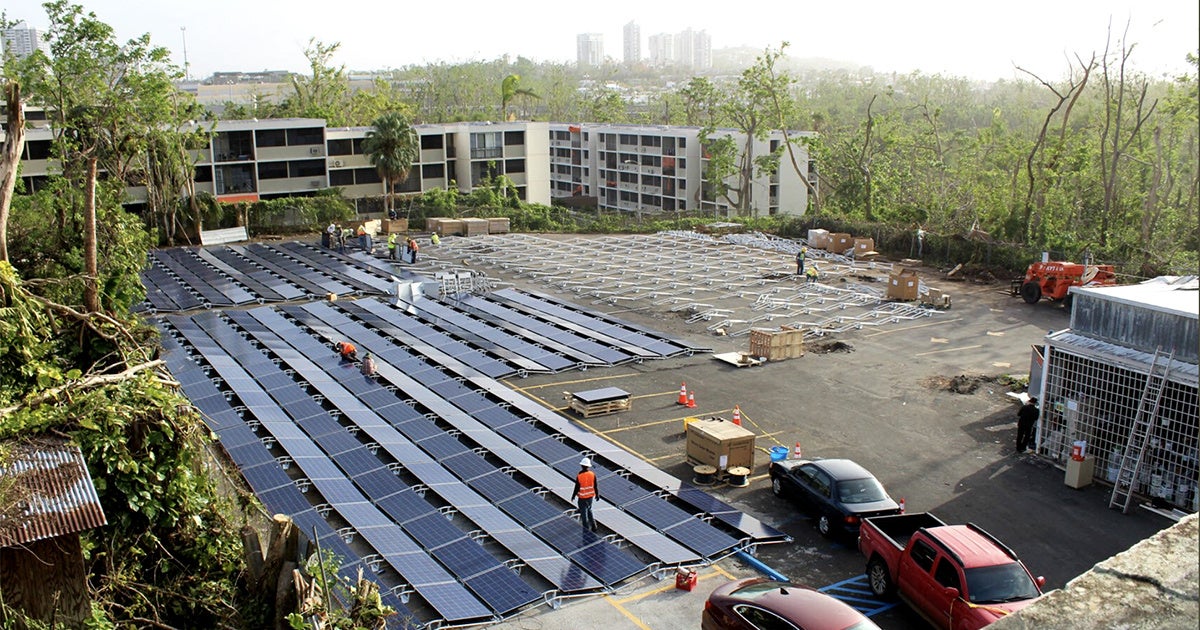 In addition to its many other devastating human consequences, Hurricane Maria left the island of Puerto Rico with its power grid in ruins. Power was knocked out throughout the island, with an estimated
80 percent of its transmission and distribution wires incapacitated. When hospitals and other critical users could not get backup power and water supplies ran low, an extended outage became a humanitarian crisis that has yet to be resolved.

This shameful outcome should have been avoided with strong, swift federal leadership. Yet more than five weeks after the storm, only
about 40 percent of the grid has been rebuilt, and service remains unreliable even where power is restored.

As the recovery process inches its way forward, the questions many are asking go like this: Why are we rebuilding the grid to be the same as it was before the storm? Can’t we use this as an opportunity to create a more modern, resilient, renewable power system? Isn’t this the perfect opportunity for an upgrade?

The answer to these questions, from my perspective having worked with and researched the power industry for four decades, has little to do with technologies and everything to do with some nearly insurmountable financial and governance challenges. There is a path forward, but it will not be easy.

The Power System Before Maria

Prior to Maria, Puerto Rico had one of the largest public power authorities in the U.S., known as PREPA, serving a population of
3.4 million people from 31 power plants, 293 substations and 32,000 miles of wire. Almost half its generation was from old, very expensive oil-fired plants, resulting in prices about 22 cents per kilowatt hour, among the highest in the U.S. The island has several solar photovoltaic farms but gets about 46 percent of its power from oil and only about 3 percent from solar.

At the center of all this is PREPA and its outsized role in Puerto Rico. With US$9 billion of debt, PREPA has been part of the contentious refinancing process that ultimately required congressional action. PREPA is also the largest employer on the island, with strong connections to the island’s leadership, so proposals perceived to adversely impact PREPA can be difficult to enact. Recently the island has established a new energy commission called
PREC with oversight over PREPA’s plans, spending and rates.

The PREC’s efforts at reform underscore the enormous challenges the utility faces. In September 2016 the
PREC issued an order directing PREPA to convert some of its oil plants to gas, renegotiate some high-priced renewables contracts and purchase more renewable energy.

In April 2017 PREPA issued a new financial plan with starkly grim prospects: a $4 billion maintenance backlog, the loss of fully one-quarter of its sales in the next 10 years, and
continued red ink as far as the eye can see. Meanwhile, renewable power developers who have tried to build plants on the island have encountered great difficulties, as chronicled in this blog post.

Then, just before Maria, PREPA declared bankruptcy. Maria therefore destroyed the grid of a system that was already bankrupt, having trouble maintaining its service and paying its bills, resistant to renewable interconnections, and politically difficult to reform.

Proposals for Rebuilding With Microgrids

The challenge, then, is to 1) restore energy access as quickly as possible; 2) begin to build a long-term resilient and operable grid; and 3) reform a broken regulatory system. In the wake of the storm, clean energy experts and businesses saw this as the perfect opportunity to start over.

“Puerto Rico will lead the way for the new generation of clean energy infrastructure,” one solar CEO asserted, ”
and the world will follow.” Elon Musk also famously tweeted an offer to solve the island’s energy problems with Tesla solar systems and batteries.

With an array of solar panels and batteries, a group of buildings, such as a hospital, or a neighborhood can power itself and operate independently in the case of an outage with the central grid—called “islanding” in industry parlance.

Provided they can be paid for and operated safely, quickly setting up these solar microgrid systems is an excellent measure that is both stopgap and long-term contributor. These systems can be set up in a matter of days, providing enough power to help neighborhoods with critical power needs, such as cellphone charging, powering cash machines and providing electricity service for health care and first responders.

However, these systems cost tens of thousands of dollars, and there is currently no substantial way to pay for them other than the kindness of strangers. Three-and-a-half million people would need perhaps 350,000 of these systems—at a price tag in the billions—to provide only a fraction of most families’ power needs.

Even if costs were not a consideration, these distributed systems aren’t a substitute for the grid. Many people think that microgrids don’t need poles and wires, but if they serve more than one building they use pretty much the same grid as we use today.

Once the grid is rebuilt, the new grid-independent systems should then become part of a series of new community microgrids, or networks of multiple solar panel installations backed up by storage. These interconnected systems would be able to “island” together to keep the whole community running at partial if not complete levels of service. With the necessary planning and approvals, new community power organizations could be set up—perhaps separate from PREPA—
to finance the conversion of local grids to a more resilient form.

So there is a path from the current grid to one that is far cleaner and more resilient, but it’s not simple or quick. It would require melding complete and rapid restoration of power with a major infusion of capital.

Changing the base of generation from PREPA’s aging, inefficient fleet to clean sources is an essential part of this path. However, even at an extremely fast pace, it takes months to plan the economics, financing and engineering of this transition. More commonly, it takes years and careful economic and financial planning to raise the billions of dollars of capital needed and then spend it wisely.

Puerto Rico’s citizens have endured great hardship and tragedy. We as a society certainly owe it to them to do whatever we can to lessen the damage from the next hurricane and speed power restoration. However, the path to a sustainable and resilient grid for the island is not as simple as air-dropping solar panels and other equipment onto the island and assuming all will be well. The suggestion that restoring power by replanting the current poles and wires will foreclose a more distributed solution isn’t correct, nor is it the most equitable way to restore power to everyone as quickly as possible.

This isn’t to say that the installation of fully independent solar systems and microgrids should be discouraged in any way. With the important provision that the hardware is maintained properly, the more solar and storage we can get onto the island sooner the better.

At this point, Puerto Rico’s grid is being rebuilt essentially
as it was before.

But even as the grid is rebuilt as quickly as possible, the planning and engineering should begin on how to migrate the grid to smaller sections that self-island. This must include all the main aspects of power system development and operation, including financing, ownership, operation and maintenance of the systems.

The only logical way for Puerto Rico—and every other storm-prone electric system—to become a series of resilient and clean microgrids is to first get the entire grid functioning and then to create sections that can separate themselves and operate independently when trouble hits.

Dr. Peter Fox-Penner is a Professor of Practice in the Questrom School of business and the Director of Boston University’s Institute for Sustainable Energy. He thanks Scott Sklar, Phil Hanser, Sameer Reddy, Thomas McAndrew and Jennie Hatch for input. All errors are his own.