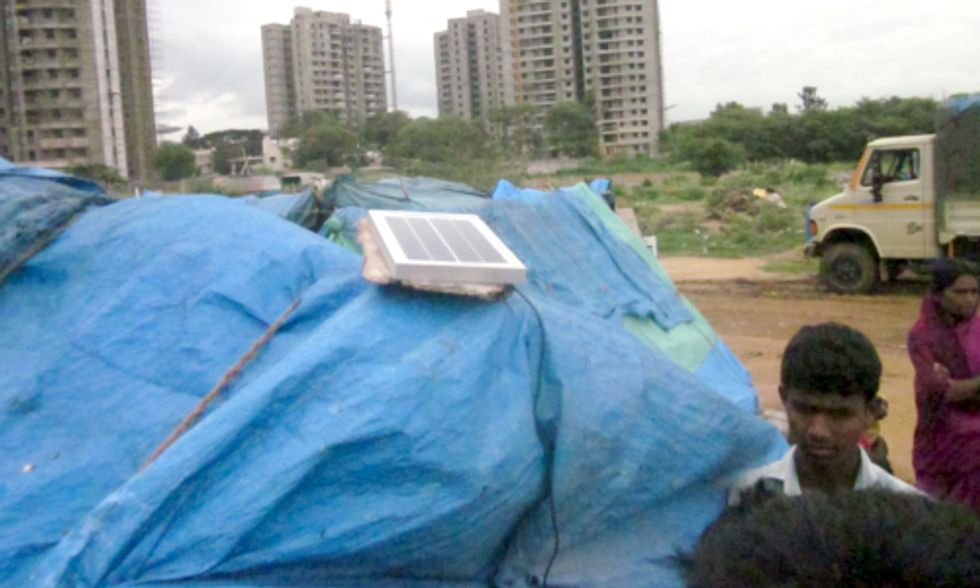 One of the major consequences of industrial agriculture is the steady flight of rural populations to urban centers. Economists have widely encouraged this mass movement of people as a sign of a developing economies "specializing."

We are seeing this trend in all majors cities in Latin America, Asia and Africa. Young men and women leave their villages and move to the city in search of better wages and lifestyle. Unfortunately, the promise of a better livelihood often fails to materialize. Villagers are forced to live permanently in tent cities that are scattered across the city with little or no access to water or electricity. Meals are generally cooked inside the tent using open fires that cause respiratory problems for women and children.

Bangalore is no exception to the effects of a globalized economy, but there is an organization working hard to make life in the tent communities a little brighter: Pollinate Energy.

The lamp has three settings: the brightest setting can provide eight hours of light, the second brightest provides energy for 16 hours and the third setting provides light for 24 hours. The lamp itself costs 1,600 rupees ($24 USD) with options available to customers to pay in weekly installments. Along with the solar lamps, the Pollinate Energy team has plans to carry a line of highly-efficient cook stoves. These cook stoves are indeed attractive in that they emit far less pollution than a conventional wood oven, reducing respiratory health risks for the occupants of the home. Additionally, they require less wood fuel but don’t diminish the wood fire “taste,” a fact that Pollinate Energy has found very important for the women of the household.

Substituting solar energy for kerosene has an immense environmental benefits as well as being a financial boon to their customers. They have found that out of the 6,882 people they have served, they have sold 1,496 solar lamps saving 25,512 liters of kerosene preventing 61,129 kg of carbon emissions from going into the atmosphere. Kerosene is also expensive. Pollinate Energy has saved their solar lamp users approximately 1,326,631 rupees ($19,855 USD).

The solar lamp can provide up to 24 hours of light. Photo credit: Ted Swagerty

The founders of Pollinate Energy share a deep commitment to bettering the lives of others. They sincerely hope this social enterprise will distinguish itself from nonprofit, donation-based organizations by using tools of the market to build more resilient livelihoods. Ben, Monique, Emma, Kat and Jamie are close friends from university and earlier. They started developing their business model in 2011 and officially launched Pollinate Energy in 2012.

The organization of each pollinator team is split into three diverse and distinct groups, each with its own responsibilities. There are two fellows, one intern and one pollinator in each group. Fellows are selected from a pool of young applicants, mainly from Australia and eager to gain hands-on experience in sustainable development. The interns are selected from a pool of Indian and Nepalese university students.

The pollinator applicants are young, high-school educated individuals from local area paid on a commission per sale of a solar lamp. The fellows and interns assist the pollinators with their sales, accounting, and research for new tent communities. In the morning, the group works hard to scour Google Earth satellite images for the telltale blue tarp roofs of the tent homes.

They then plot the coordinates into their smart phones and make plans to visit that specific community later that afternoon, when most workers have returned home. Finding the communities that can benefit from Pollinate products and reaching the location in Bangalore's thick traffic seems to remain one of the main challenges.

A new customer hangs his micro panel on top of his shelter in India. Photo credit: Ted Swagerty

As with any beginning organization, funding and access to talented individuals continue to challenge the group. They are continuing their ambitious plan to serve the entire Bangalore area by 2013 and hope to introduce pollinating teams in Chennai and Hyderabad in early 2014.

“We hope,” Mon says, “to make this enterprise as self sufficient and independent as possible to cut down administrative oversight. We want to see it spread as quickly as possible.”

I had the pleasure to accompany a pollinator team one afternoon and see tent communities that are popping up around the Bangalore urban area. As we navigated our way to our destination, I learned more about the team's experiences. It seems there was a general consensus in the van that the most rewarding part of work is the feeling that they are improving lives.

Sheetal, an intern studying engineering, told of how a 10-year-old girl pleaded with her parents for a lamp to help her studies. The next week, the parents thanked the group personally, saying that the little girl finishes homework every night without the constraint of night time.

“It was really cool to see that,” Sheetal said as she stared out the window, reminiscing, “I'll probably remember that for the rest of my life.”

As economic migrants flow into India's already bloated cities, utilities are strained. In July 2012, the largest blackout occurred in the history of the world. More than 100 million people were without power for nearly four days. Pollinate Energy hopes to relieve this drain by providing a means to electric resiliency, albeit modest.

The amount of carbon emissions saved by providing a safe alternative to burning kerosene is not insignificant. The financial and lifestyle benefits to the families should not be overlooked.