Solar Is the Fastest-Growing Source of Renewable Energy in America 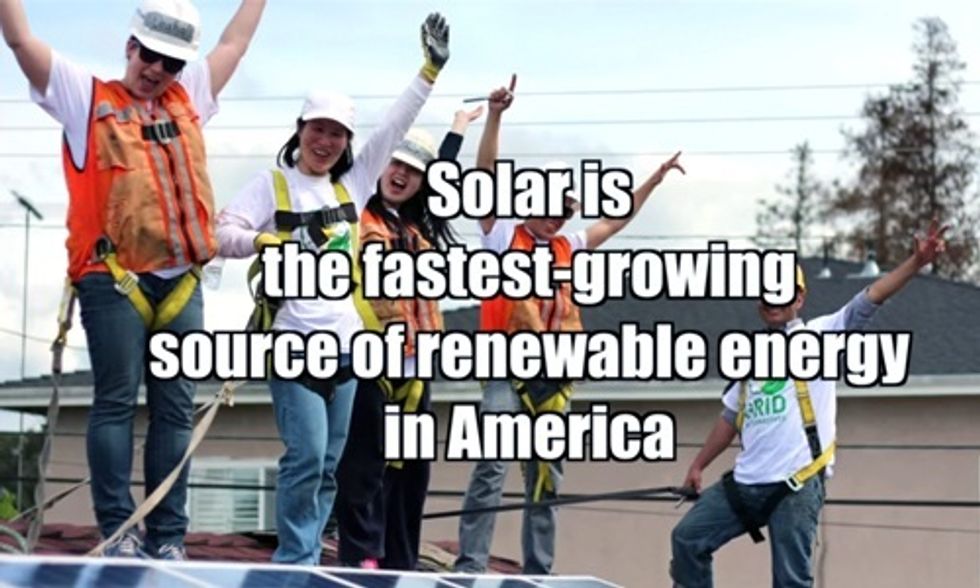 According to a detailed SEIA analysis, in 2004, there were 500 megawatts (MW) of solar energy installed nationwide. But by the end of 2014, there were 20,000 MW—enough to power more than 4 million homes—with 97 percent of that capacity added after passage of the solar Investment Tax Credit (ITC). Over the same time period, the cumulative investment in installed solar installations in the U.S. soared from $2.6 billion to $71.1 billion.

And from an environmental perspective, by 2016, solar is expected to offset more than 45 million metric tons of damaging carbon emissions—the equivalent of removing 10 million cars off U.S. roads and highways, or shuttering 12 coal-fired plants.

Our new video report is not only filled with important information like this, but it tells solar energy’s tremendous success story in a fun and visually-interesting way. For example, did you know that in 2004 only two states had 10 MW of installed solar capacity, yet a decade later, 35 states had topped that threshold—and 20 states had more than 100 MW? But here’s the best news: we expect to double our total capacity in the next two years alone.

Here are some other key takeaways from SEIA’s analysis:

Most importantly, the tremendous growth of solar energy in the U.S. has translated into tens of thousands of new jobs. In 2004, there were less than 20,000 people at work in the U.S. solar industry. Through 2014, that number had soared to 174,000—with new jobs being added every day. Without question, effective, forward-looking public policies, like the solar ITC, Net Energy Metering (NEM) and Renewable Portfolio Standards (RPS), are helping to drive solar energy’s remarkable growth. Because of these polices, we should be generating enough clean electricity to power more than 8 million American homes by the end of 2016, benefitting both our economy and environment, while providing homeowners, businesses, schools, nonprofits and government officials at all levels with real choices in how they meet their electricity needs in the future.