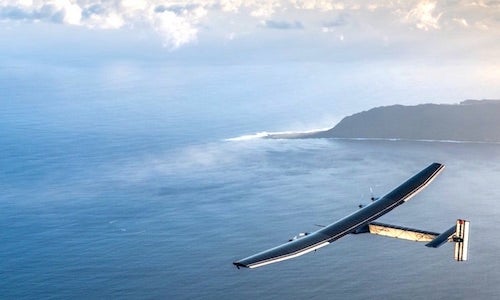 The Solar Impulse 2 took off earlier this morning from New York City for its historic, sun-powered flight across the Atlantic Ocean. The multi-day odyssey will be the longest and perhaps the most difficult leg in the solar plane’s journey around the world. 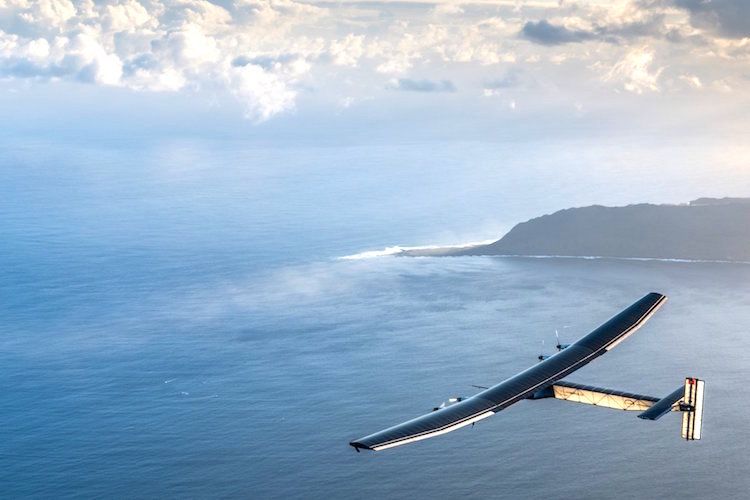 The aircraft left John F. Kennedy International Airport at 2:30 a.m. and is being piloted solo by Swiss adventurer Bertrand Piccard.

“It’s my first time taking off from JFK,” Piccard said over a live feed from the aircraft, according to the AFP.

The flight will last approximately 90 hours before landing at the Seville Airport in Spain. Weather conditions could force changes to the route and make the flight more difficult.

“Over the Atlantic Ocean, the weather can be rather unstable and unsettling so we can definitely expect to cross a cold front during the flight,” the team wrote in a Q&A. “As many sailors have expressed before, the Atlantic Ocean holds the most difficult winds they have ever encountered.”

Already several hours into his flight, Piccard tweeted that he’s now past the point of no return.

I just passed the Point of No Return w/ #Si2. Now I will only be flying toward #Europe with the vast #Atlantic ahead pic.twitter.com/5EilBceVSQ

You can take part in the transatlantic experience on solarimpulse.com’s live feed. Upcoming Facebook live sessions will also feature Piccard from the Solar Impulse 2 cockpit and fellow pilot Andre Borschberg from the mission control center.

The Solar Impulse team plans to fly around the world using only the power of the sun to promote renewable energy and other environmental causes. The plane, which runs on 17,000 solar cells and batteries, began its round-the-world trip from Abu Dhabi in March 2015.

“We have demonstrated it is feasible to fly many days, many nights, that the technology works,” Borschberg told the Associated Press in April. Borschberg had piloted a grueling 4,000-mile, 118-hour flight between Nagoya, Japan and Hawaii that is officially the longest uninterrupted journey in aviation history.

To complete its circumnavigation around the globe, the plane still has to fly through Europe and the Middle East back to Abu Dhabi.

As Piccard flew above the Atlantic Ocean this morning, he took the time to tweet out a photo of his majestic view.

What a beautiful sight of jumping whales. Just like the whales below me, #Si2 depends only on nature. pic.twitter.com/Qc1ch0JY6i

“What a beautiful sight of jumping whales. Just like the whales below me, #Si2 depends only on nature,” he wrote.

Ever the ocean-enthusiast, in April, after making an epic 62-hour flight from Hawaii to California without a drop of fuel, Piccard observed the horrific amount of plastic that has accumulated in the Pacific ocean.

While flying above the Great Pacific Garbage Patch, Piccard sent out a tweet to Boyan Slat, the 21-year-old founder and CEO of The Ocean Cleanup.

Solar Impulse Pilot: ‘I Flew Over Plastic Waste As Big As a Continent’ https://t.co/0t4t0BHWb2 @HealTheBay @savingoceans

“I flew over plastic waste as big as a continent,” Piccard wrote. “We must continue to support projects like @BoyanSlat Ocean Cleanup,” referring to Slat’s ambitious project of ridding the world’s oceans of plastic trash.