Solar Geoengineering Could ‘Fail to Prevent Damage to Crop Yields’ 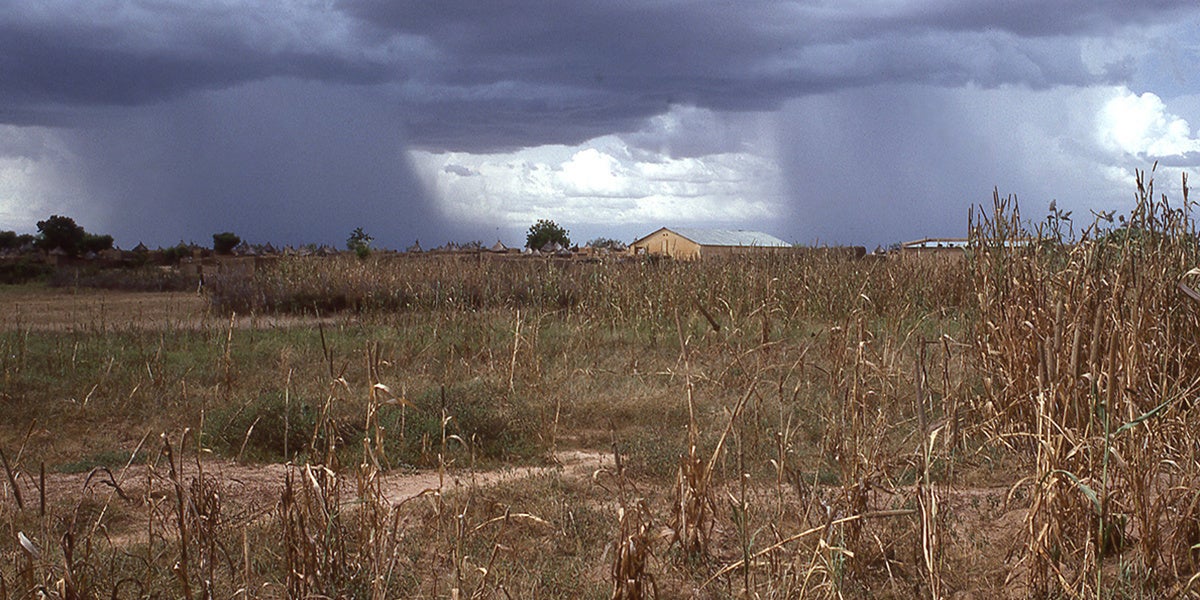 Scattered rainfall over dry season fields before harvest in the Sahel near Bahn Yatenga Burkina Faso Africa. The region is regularly affected by droughts. Getty Images

Releasing aerosols into the atmosphere in order to limit the rise in global temperature would not stave off damage to crop yields, a new study suggests.

Scientists have suggested that intentionally releasing aerosols into the atmosphere—a type of “solar geoengineering“—could help to limit global warming by reflecting away incoming sunlight in a similar way to a volcanic eruption.

The new research uses historical data to investigate how past major volcanic eruptions have impacted global crop yields. It finds that, following past eruptions, global crop yields have been negatively impacted by a reduction in direct sunlight—which impairs the ability of plants to photosynthesize.

The findings suggest that, if ever used, solar geoengineering could benefit crops by cooling temperatures and reducing the risk of heat stress. However, this positive effect could be largely offset by the negative impacts associated with a reduction in sunlight, the authors say.

However, the new research is “limited” and does not take into account the differences that are likely to exist between volcanic eruptions and solar geoengineering, other scientists tell Carbon Brief. Therefore, they say, it should not be used to draw “solid conclusions.”

Solar geoengineering is a term used to describe a set of still-hypothetical technologies that could limit global warming by reflecting more sunlight away from Earth.

The most commonly proposed technology is “stratospheric aerosol injection,” a technique where reflective solid particles known as aerosols—such as sulphur dioxide—would be released high up in the stratosphere using, for example, a high-altitude balloon or plane.

Because the technique has never been tested, it is still unclear what its impacts would be.

However, previous research using modeling suggests that releasing aerosols could limit temperature rise and restore rainfall to pre-industrial conditions. This could benefit crop production, which is likely to face threats from heat stress and drought as the climate warms.

Yet, other scientists have postulated that solar geoengineering could be harmful to crops. This is because the presence of reflective aerosols reduces the amount of direct sunlight reaching plants. Plants absorb sunlight and use it to create energy during photosynthesis.

The new research, published in Nature, is the first to look at the potential impacts of solar geoengineering via the use of “real world” analogues—two previous volcanic eruptions.

When a volcano erupts, it spews out ash, dust, CO2 and sulphur dioxide high into the atmosphere. The sulphur dioxide combines with water to form sulfuric acid aerosols, which—along with the ash and dust—temporarily cool the planet by reflecting away sunlight.

The two eruptions include Mexico’s El Chichón in 1982 and Mount Pinatubo in the Philippines in 1991—the latter of which, in its aftermath, released enough aerosols to cause average global temperatures to dip by 0.5°C, according to the researchers. 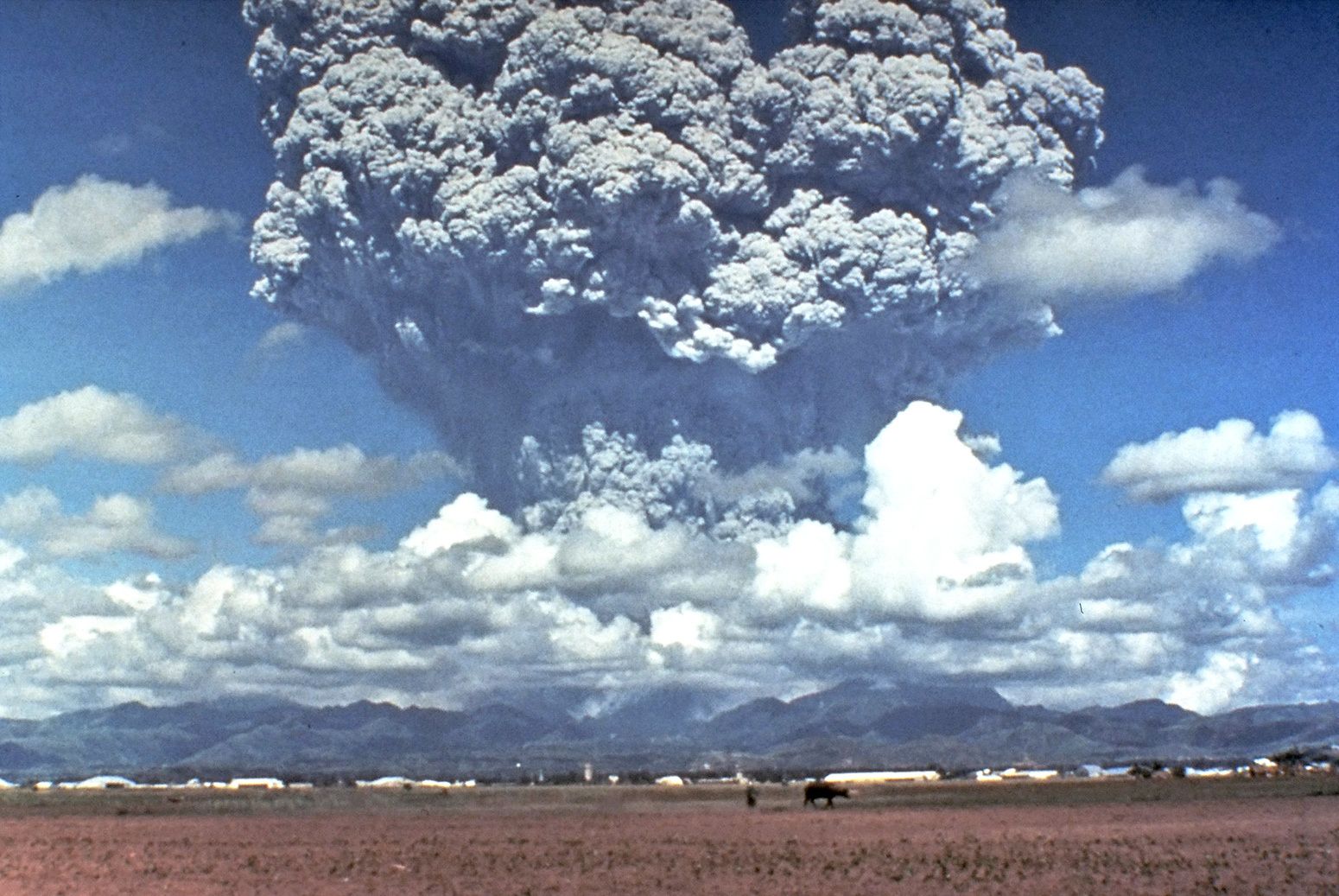 The findings of the research suggest that, if solar geoengineering were to be used, its impact on incoming sunlight would “wash out” any potential benefits the technology would have for agriculture, lead author Jonathan Proctor, a Ph.D. student at the Global Policy Laboratory at the University of California, Berkeley, told a press briefing. He said:

“The implications of this are that solar geoengineering, using sulphate-based aerosols like we saw emitted from these volcanic eruptions, may be an ineffective way to mitigate the damages that climate change poses to global agricultural production.”

For the study, the researchers used historical data taken from the United Nations Food and Agricultural Organization (FAO) to explore how the yields of several crops, including wheat, maize and rice, were affected in the aftermath of each eruption.

The chart below shows changes to several variables, including aerosol cover, average global temperature and average global crop yields between 1980 and 2010. On the chart, the dashed lines show when the eruptions of El Chichón and Mount Pinatubo occurred. 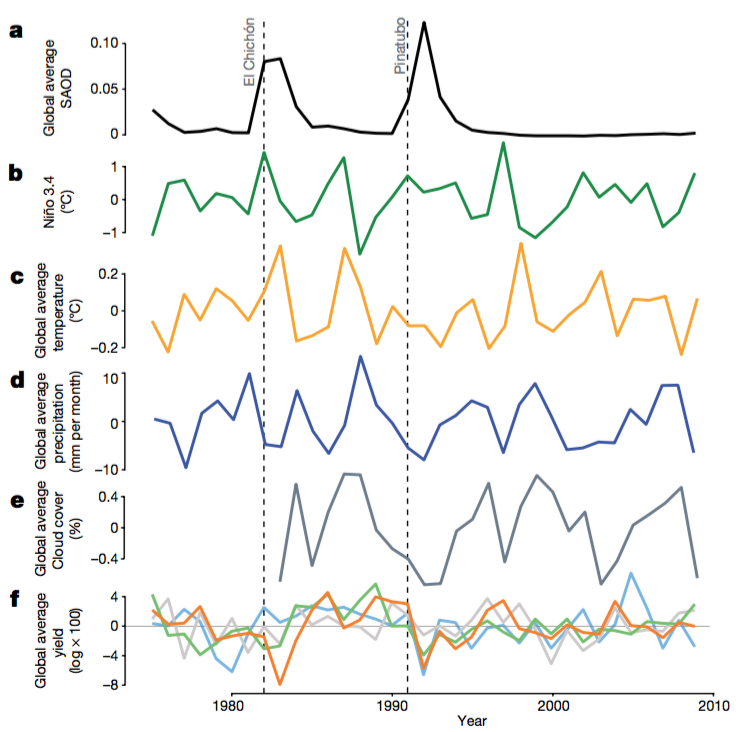 The El Chichón eruption had a “significant” impact on maize yields, but only a small effect on yields of other crops, the research shows.

One reason maize could have been impacted the most is that it is a “C4” plant (meaning that during photosynthesis it produces a sugar compound that has four carbon atoms), while the other crops are “C3” plants (meaning they produce a sugar that has three carbon atoms).

Research shows that C3 plants require less sunlight to reach optimum levels of photosynthesis than C4 plants—meaning they are likely to be less affected by the solar dimming caused by aerosol release.

To understand how solar geoengineering could impact crop yields, the researchers applied their results to a climate model.

The model looked at changes to crop yields under two future scenarios—one with “moderate” climate change (“RCP4.5“) and one with the same level of emissions, but also an injection of aerosols. The scenario assumes that the amount of aerosols released is enough to offset the temperature change caused by all emissions occurring after 2020.

The modeling results show that, in the solar geoengineering scenario, cooler global temperatures boost average maize yields by 6 percent, when compared to the climate change scenario.

However, the reduction of direct sunlight in the same scenario reduces maize yields by 5 percent over the same period. Yields are also slightly decreased as a result of the impact of aerosol release on rainfall and cloud cover.

The findings show that, in comparison to a scenario with climate change alone, solar geoengineering “has no statistically discernible effect on yields once we have accounted for optical effects,” the researchers said in their paper.

The researchers also found that solar geoengineering had an “insignificant” effect on yields of soy, rice and wheat—in comparison to the climate change scenario.

The findings suggest that, on balance, solar geoengineering could “fail” to prevent the damage to global crop yields expected under climate change alone, said Proctor.

The new research could offer a new avenue for solar geoengineering researchers, said co-author professor Solomon Hsiang, a policy researcher from the University of California, Berkeley. He told a press briefing:

“A key innovation of this study was to find a way to study the potential side-effects of geoengineering without actually deploying it.”

However, although the research is “useful and important” to understanding more about how the dimming of sunlight could affect agriculture, it does not provide “solid evidence” of how solar geoengineering would impact crops, said professor David Keith, director of the Solar Geoengineering Research Program at the University of Harvard, who was not involved in the research. He told Carbon Brief:

The new research also does not consider how solar geoengineering could influence the occurrence of extreme events, such as heatwaves and droughts, which are likely to be important to crop production, said Dr. Anthony Jones, a research fellow from the University of Exeter, who was also not involved in the research. He told Carbon Brief:

“I suspect that the crop yields are sensitive to changes to extremes – for instance, droughts and heatwaves – that may be ameliorated by SRM and which are not accounted for in this model.”

The methods used by the research team are “interesting” and provide “new results,” said professor Alan Robock from the the department of environmental sciences at Rutgers University. He told Carbon Brief:

“But they are based on agricultural practices from 30 years ago. More study of whether modern and future farming, including new equipment, seeds, and fertilizers, would react the same way is needed.”

The study takes an “important” step forward in understanding the potential socio-economic impacts of solar geoengineering, said professor Govindasamy Bala, from the Divecha Centre for Climate Change at the Indian Institute of Science. He told Carbon Brief:

“However, I do not think this is the last word on this subject. More similar studies would be needed to narrow down the uncertainty in process modeling.”

Agreeing with Bala, professor Douglas MacMartin, an engineering researcher from Cornell University, who contributed to a hearing on geoengineering at the U.S. House of Representatives, said the results should provide “motivation” for more research. He told Carbon Brief:

“The study is important for looking at a possible impact of solar geoengineering that no one has yet explored. But because the data that goes into the study is so limited and so noisy, one shouldn’t read too much into it, at least not yet. Instead, this should be taken simply as motivation for doing more research and only reaching conclusions after more studies have looked at this question.”