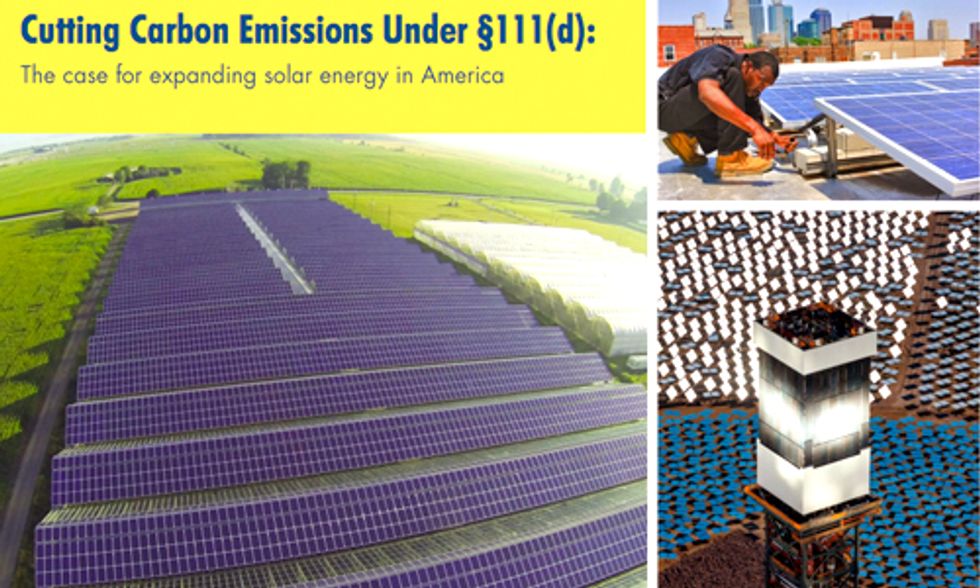 In the ongoing war on pollution, there’s an increasingly bright light shining through the haze: solar energy.

Today, solar is providing a big boost to our environment. The 14,800 megawatts (MW) of solar currently installed in the U.S. can generate enough pollution-free electricity to displace 18 billion pounds of coal or 1.8 billion gallons of gasoline. That’s the equivalent of removing 3.5 million passenger cars off our roads and highways. For state’s trying to meet new, enhanced air quality standards, solar can be a real game changer.

Why is this so important? Because on Monday, the U.S. Environmental Protection Agency (EPA) is set to announce new air quality standards for coal and natural gas-fired power plants.

In advance of that announcement, the Solar Energy Industries Association (SEIA) has just released a comprehensive report, Cutting Carbon Emissions Under §111(d): The case for expanding solar energy in America. The report offers a detailed, point-by-by point case as to why states should take advantage of clean solar energy as part of their efforts to comply with §111(d) of the Clean Air Act. This year alone, solar is expected to generate enough electricity to effectively offset 13.8 metric tons of CO2 emissions.

The recently released National Climate Assessment report clearly spells out the growing dangers of climate change to the U.S. economy and the environment. According to study after study, reducing greenhouse gas (GHG) emissions—especially from existing power plants—is a critically important step in combating pollution. Once the new EPA emission standards are in place, each state will be required to create a compliance plan, which must be approved by federal regulators. Failure to do so could result in a more restrictive EPA-mandated plan.

Today, solar is the fastest-growing source of renewable energy in the U.S., employing 143,000 Americans and accounting for nearly 30 percent of all new electric generation capacity installed in 2013—second only to natural gas. All totaled, solar is now generating enough clean, reliable and affordable electricity to effectively power nearly 2.5 million homes. We’re doing our part to help fight climate change, but we can do a lot more in the future—and that’s something we will be stressing to state regulators once the new carbon rules for power plants are announced.

According to the SEIA report, solar has already proven to be a key part of many states’ energy mix—as demonstrated on March 8 when solar provided a record 18 percent of California’s 22,700 MW demand.

“Solar energy is a solution technology that can provide a cost-effective, economically beneficial and integral part of a state’s effort to regulate carbon emissions from the electric sector,” the report states. “Solar energy’s rapidly falling prices and rapidly growing generating capacity, as well as the volatility of fossil fuel prices, give solar energy the potential to transform compliance with both new carbon emission requirements and other existing requirements under the Clean Air Act.”

The report goes on to note, “Historically, air pollution emission reduction from the electric sector has been achieved primarily through pollution control equipment at power plants. Today, the EPA and states recognize that the reduction of carbon emissions from the electric sector requires a new approach that treats the production and delivery of electric power as a broad system, in which power plant modifications, demand side reductions and renewable energy all contribute to emission reductions.

“Solar contributes to a balanced portfolio of energy resources, and can help achieve an optimal long-term strategy for each state’s economy and environment. By including solar energy as part of their §111(d) compliance plan, states can cost-effectively meet their Clean Air Act requirements while reaping a wide range of additional benefits.”

Today, solar is the fastest-growing energy source in America. In fact, in the first quarter of this year, nearly two-thirds of all new electricity capacity installed in the U.S. was solar. While that’s a remarkable achievement, we believe the best is yet to come.