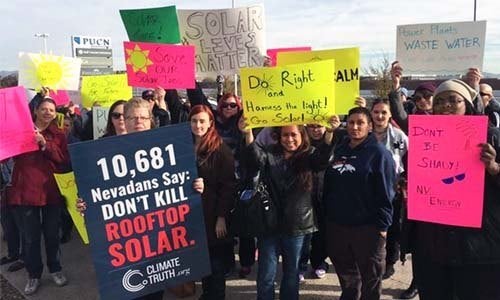 Renewable energy advocates in Nevada are outraged by the state’s solar-killing moves and they’re not going down without a fight.

The Republican-appointed commission in late December voted to increase a fixed monthly fee for solar customers by about 40 percent while simultaneously reducing the amount customers get paid for excess power they sell to the grid. It also made these changes retroactive—a move one solar executive said would “sabotage” consumers’ investments.

Clean energy advocates swiftly decried the changes, which have left the state’s solar sector “in turmoil.”

Lyndon Rive, CEO of SolarCity, said the move would “destroy the rooftop solar industry in one of the states with the most sunshine.”

In fact, he added, “the one benefactor of this decision would be NV Energy, whose monopoly will have been protected. The people will have lost choice, jobs and faith in their government.”

“Nevada passed incentives to attract residents to go solar. But after baiting homeowners with incentives, the state switched the rules, penalizing solar homeowners to deliver additional profit to NV Energy. This bait and switch hurts Nevada families, many of whom are retirees on fixed incomes and who use solar savings to meet their monthly budgets.”

Renewable energy advocate Judy Treichel, who serves as executive director of the Nevada Nuclear Waste Task Force, belongs to one of those families.

In a guest column for the Las Vegas Sun published Tuesday, Treichel explained how “when the price of solar panels for residential installations dropped significantly, we tapped $8,500 from our retirement savings—after taking into account an NV Energy rebate and federal tax credit—and become a solar household. We were solar-powered all of last year and our annual savings showed our system would pay for itself within 14 years. Moreover, it was right for the environment.”

“With the new pricing for NEM customers, the value or price of the energy they produce will be vastly reduced. In addition, the flat service charge for NEM customers will rise to three times that charged to nonsolar residential customers, a kind of penalty for producing much of our own electricity. The people with solar on their homes feel cheated; solar businesses are closing or leaving.”

Similar arguments were reiterated on Wednesday, when actor-activist Mark Ruffalo joined hundreds of Nevadans calling on the PUC to change course—and for Gov. Brian Sandoval to take a stand against the new rates.

I stand with the hundreds of Nevadans asking @nevada_puc to protect #NVsolar, jobs and investments in our clean energy future #WeAreSolar

Of course, while the PUC’s solar-killing move directly impacts locals, it comes amid a growing global push for a clean transition to renewable energy.

“Today’s decision puts Nevada embarrassingly out of step with the national and international agenda recently set in Paris to save our climate,” Rt. Rev. Dan T. Edwards, Bishop of the Episcopal Churches of Nevada, said, following the PUC’s vote in December.

Indeed, squashing solar can be seen as a desperate attempt to hold on to the status quo, as Danny Kennedy, author of the book Rooftop Revolution and co-founder of solar company Sungevity in California, said in an interview with Alternet in 2013:

“Solar power represents a change in electricity that has a potentially disruptive impact on power in both the literal sense (meaning how we get electricity) and in the figurative sense of how we distribute wealth and power in our society. Fossil fuels have led to the concentration of power whereas solar’s potential is really to give power over to the hands of people. This shift has huge community benefits while releasing our dependency on the centralized, monopolized capital of the fossil fuel industry. So it’s revolutionary in the technological and political sense.”