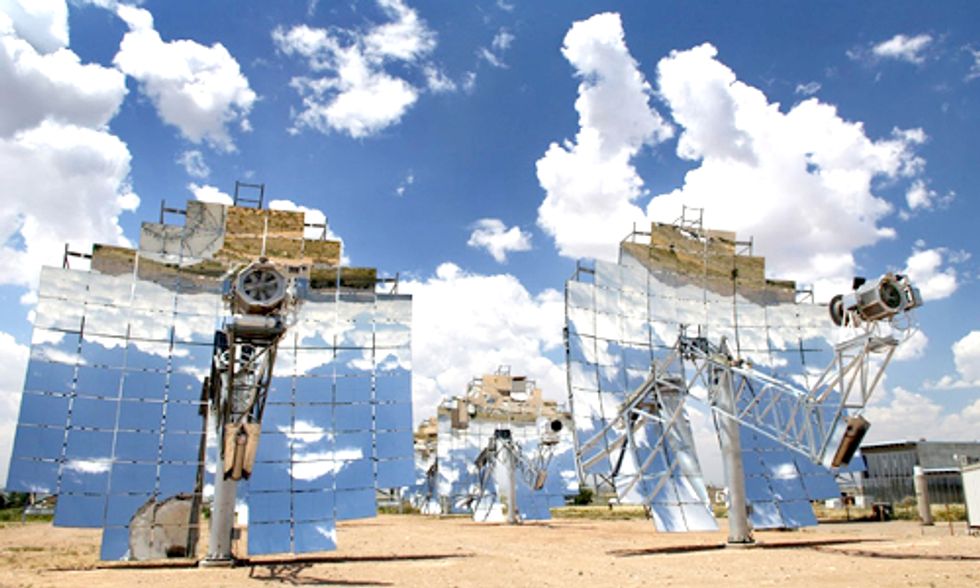 Less than three years in, the U.S. Department of Energy's (DOE) solar cost reduction initiative has risen far above expectations.

The DOE announced the SunShot Initiative in February 2011 with the goal of encouraging a price drop for utility scale installations by 75 percent by 2020. So far, the federal department has achieved about 60 percent.

The Stirling Energy Systems dish in Albuquerque, NM generates electricity by focusing the sun's rays onto a receiver, which transmits the heat energy to a Stirling engine. The Department of Energy's SunShot Initiative aims to cut the cost of utility scale solar installations to make way for the broad deployment of similar projects. Photo credit: Sandia National Laboratories/Randy Montoya

"We are three years into a ten year mission, so we are 30 percent of the way through the time and 60 percent of the way there and going twice as fast as we need to," Minh Le, SunShot director, told London-based PV-Tech. "I would attach a caveat to that because the first half is always the easiest, that's the low hanging fruit. The second half will be really hard."

The DOE set out to cut utility scale installations to $1 a watt or about 6 cents per kilowatt-hour in order to broadly deploy solar energy systems around the nation. The department has been working with governmental, private and academic partners on sunlight-to-energy conversion solar cell technologies, solar manufacturing efficiency and more to make its dream a reality.

"The costs have come down dramatically," Le said. "Utility scale solar is less than $2 per watt. When we started in 2011, our 2010 benchmark was $3.80 per watt, so it has come down by half. The price of utility scale solar has halved compared to what it was two years ago.

"Our goal is $1 per watt, so we really only have one more dollar to go but it will be the hardest dollar to get."

Le pointed to hardware and software costs to help in saving that dollar.

"We still need innovation in hardware, not just the modules where there are still clearly exciting opportunities in improving the efficiency of cells," he said. "There are other opportunities elsewhere and many of these can be exported. Our incubator is funding one company called Brittmore that is automating the installation of panels in the field, QBotix is using robots to do two-axis tracking. This is already being exported elsewhere in the world."

The SunShot Initiative awarded a total of $60 million to various companies, businesses and universities for solar research and manufacturing. Awardees ranged from the University of California, San Diego to the Electric Power Research Institute in Knoxville, TN, which is an example of a regional training consortium to support the 119,000-employee solar industry.

“The tremendous growth in the U.S. solar industry over the past few years is helping to pave the way to a cleaner, more sustainable energy future that protects our air and water and provides affordable clean energy to more and more Americans,” Energy Secretary Ernest Moniz said at the time.