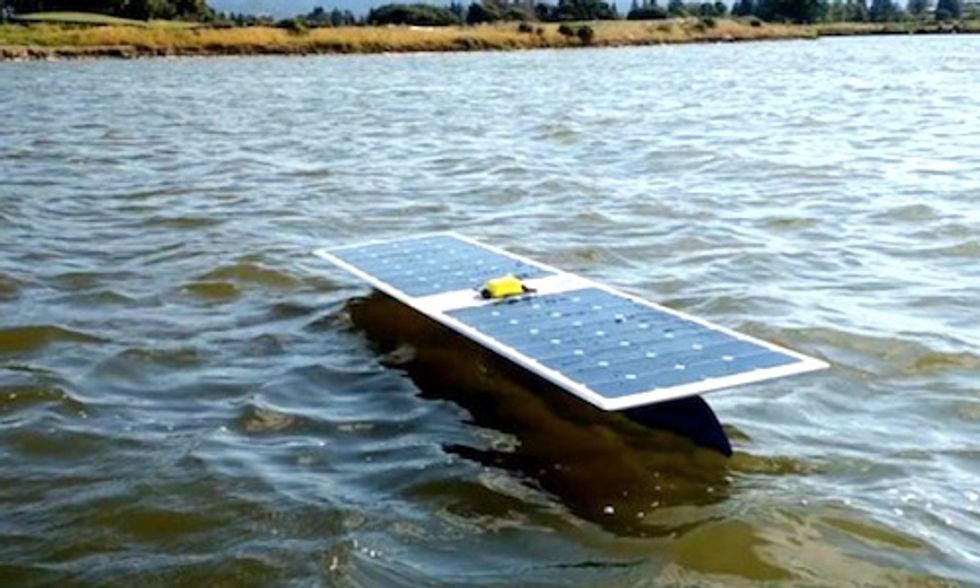 The Seacharger, a solar-powered boat built by "a couple of hobbyists" in a garage, will set sail for a solo, 2,000-mile ocean journey from California to Hawaii on Memorial Day.

The project was conceived by Silicon Valley-based Damon McMillan, who has a background in aeronautics and astronautics and currently works in the unmanned vehicle industry.

McMillan—with help from his team of friends, who happen to be computer experts and mechanical and electrical engineers—started building the Seacharger back in December 2013 and tracked its construction in a detailed blog.

According to Seeker, if the Seacharger is able to make the epic crossing, it will become the first unmanned boat to cross an ocean using only solar power.

"We were inspired by a competition they have every year where they send a robotic sailboat across the Atlantic,

and so far that's never been successfully accomplished," McMillan says in the video.

A previous vessel named Scout attempted the trip in 2013 but was lost at sea due to unfavorable weather conditions.

The land-based captain told PC World it took a lot of trial and error to construct the boat, adding that it seemed like an impossible task at times.

“If I had started believing that I had to get to the end tomorrow, I never would have continued. So it’s always just one step at a time,” McMillan said.

The machine is pretty impressive for something built by a team of "hobbyists" who all seem to have full-time jobs. The 50-pound craft is 91 inches long and 22 inches wide with a hull made of foam covered in fiberglass. A brushless electric motor, the kind you might see on a remote-controlled hobby plane, will propel the boat at a cruising speed of about 3 knots.

Two Renogy photovoltaic panels rated at 100-watts and a 50 cell LiFePo4 battery bank should give the boat enough power for three days' travel in the dark or unlimited travel in the sun.

In order to navigate the waters from hundreds of miles away, the team installed an Arduino-based autopilot, a GPS and satellite modem on board the boat in a watertight compartment.

The developers said that their boat merely uses "a few pieces of ordinary technology to accomplish an extraordinary feat."

In a blog post last month, McMillan wrote that the technology actually works after Seacharger autonomously made two laps around Shoreline Lake in Mountain View, California.

"Sure, it looked a bit like a drunken sailor, but it DID work," the post stated. "Just gotta tune some gains."

You can track the progress of the boat after its May 30 launch here.