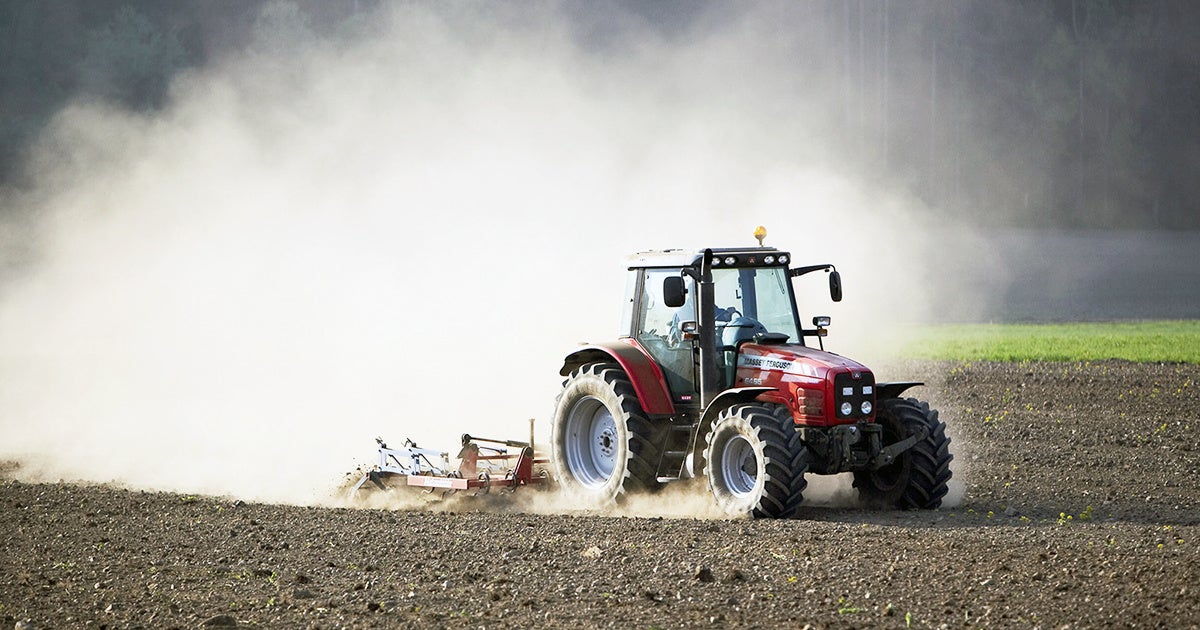 The world’s soils have lost a total of 133bn tonnes of carbon since humans first started farming the land around 12,000 years ago, new research suggests. And the rate of carbon loss has increased dramatically since the start of the industrial revolution.

The study, which maps where soil carbon has been lost and gained since 10,000 BC, shows that crop production and cattle grazing have contributed almost equally to global losses.

Understanding how agriculture has altered soil carbon stocks is critical to finding ways to restore lost carbon to the ground, another scientist tells Carbon Brief, which could help to buffer the CO2 accumulating in the atmosphere.

Soil as a Carbon Sink

The top meter of the world’s soils contains three times as much carbon as the entire atmosphere, making it a major carbon sink alongside forests and oceans.

Soils play a key role in the carbon cycle by soaking up carbon from dead plant matter. Plants absorb CO2 from the atmosphere through photosynthesis, and pass carbon to the ground when dead roots and leaves decompose.

But human activity, in particular agriculture, can cause carbon to be released from the soil at a faster rate than it is replaced. This net release of carbon to the atmosphere contributes to global warming.

New research, published in the Proceedings of the National Academy of Sciences, estimates the total amount of carbon that has been lost since humans first settled into agricultural life around 12,000 years ago.

The research finds that 133bn tonnes of carbon, or 8 percent of total global soil carbon stocks, may have been lost from the top two meters of the world’s soil since the dawn of agriculture. This figure is known as the total “soil carbon debt.”

Around two-thirds of lost carbon could have ended up in the atmosphere, while the rest may have been transported further afield before being deposited back into the soil.

And since the industrial revolution, the rate of soil carbon loss has increased, said lead author Dr. Jonathan Sanderman, a scientist at the Woods Hole Research Center in Massachusetts. He told Carbon Brief:

“Considering humans have emitted about 450bn tonnes of carbon since the industrial revolution, soil carbon losses to the atmosphere may represent 10 to 20% of this number. But it has hard to calculate exactly how much of this has ended up in the atmosphere versus how much has been transported due to erosion.”

As part of the study, the researchers designed an artificially intelligent model that used an existing global soil dataset to estimate past levels of soil carbon stocks, Sanderman said.

“We used a dataset which defines 10,000 BC as a world without a human footprint. What we did was develop a model that could explain the current distribution of soil carbon across the globe as a function of climate, topography [physical features], geology and land use. Then we replaced current land use with historic reconstructions including the ‘no land use’ case to get predictions of soil carbon levels back in time.”

The results allow scientists to get a clearer picture on how 12,000 years of human agriculture have affected the world’s soil stocks, said Sanderman.

“More carbon has been lost due to agriculture than has generally been recognized and a lot of this loss predated the industrial revolution. This loss isn’t equally distributed across agricultural land. Some regions stand out as having lost the most carbon.” The U.S. corn belt and western Europe are likely to have experienced high levels of soil carbon loss as a result of long periods of intense crop production, said Sanderman.

However, the analysis also reveals a number of regions which have seen high levels of soil carbon loss despite having relatively little farming. These “hot spots”—including the rangelands of Argentina, southern Africa and parts of Australia—are considered to be particularly vulnerable to land degradation driven by agriculture, said Sanderman.

“Semi-arid and arid grasslands [the hotspots] are particularly vulnerable to potentially irreversible degradation if grazing intensity is too high. That’s because there isn’t a lot of soil carbon to start with and there can often be a complete shift in vegetation cover leading to lots of erosion.”

Map A shows the distribution and intensity of crop production (red) and cattle grazing (green) across the world. Both have contributed almost equally to loss of soil carbon stocks, Sanderman said.

Identifying how much carbon has been lost from the soil could also help scientists understand how much could be replenished, if soils were managed so that they took up more carbon from the atmosphere than they released into it.

Soil carbon management is one of a number of negative emissions technologies (NETs) that could help to remove greenhouse gases from the air. Research suggests that NETs will be key to meeting the Paris agreement, which aims to keep warming “well below” 2C above pre-industrial temperatures, while striving to limit increases to 1.5C.

In theory, soils could be managed in a way that would allow them to reabsorb all of the carbon that has been lost since the agricultural revolution. In practice, however, this is highly unlikely, Sanderman explained.

“This figure [133bn tonnes of carbon] is likely a maximum potential if we were willing to give up agriculture and completely restore natural ecosystems. That is obviously not going to happen, so the real potential—giving the constraint of needing to feed 10 billion people by 2050—is going to be a lot lower.”

Despite constraints, the research is a “critical” step towards finding ways to replenish soil carbon stocks, said Dr. Thomas Crowther from the Yale Climate and Energy Institute.

However, the study lacks clarity on how it considers peat soils, said Prof. Meine van Noordwijk, chief science advisor at the World Agroforestry Centre in Kenya, who also wasn’t involved in the study.

Peat is a type of soil made up of waterlogged partially-decomposed plant material such as moss, which builds up over thousands of years in wetland environments including bogs.

Peat soils are thought to contain up to half of global soil carbon stocks, van Noordwijk explain to Carbon Brief, and so are of particular concern:

“Peat soils require and currently receive separate attention. Water management [of wetland soils] is a relevant part of agricultural use, leading to [carbon] losses, but also indicating opportunities for restoration.”