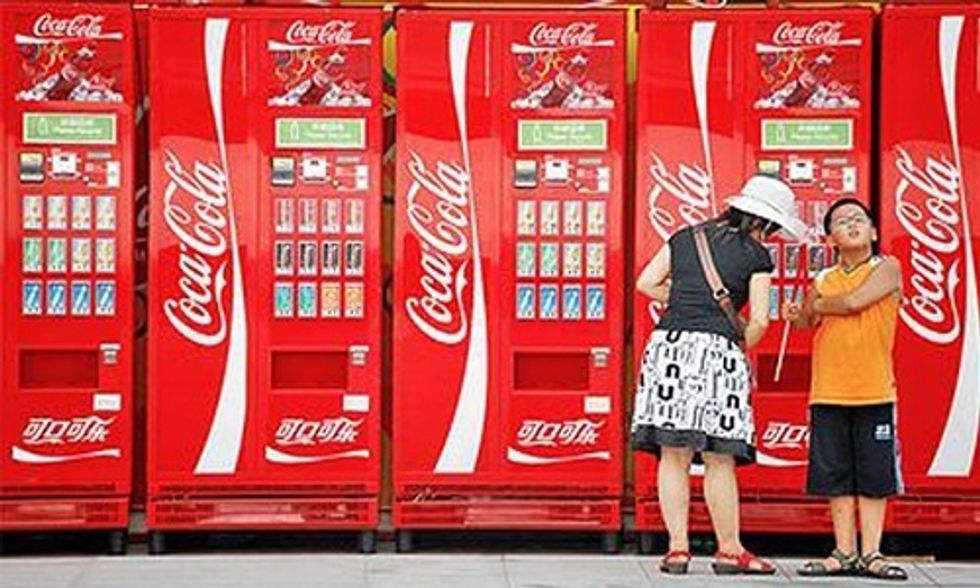 Americans still drink a lot of soda: Sales in the U.S. were more than $70 billion in 2014, according to Euromonitor International, well ahead of China, the runner-up market, with $28.4 billion. The way we think about, talk about and legislate soda has changed rather drastically—and we drink relatively less of it too, with consumption dropping 25 percent between 1998 and 2014. So with the threat of soda taxes and warning labels and an increased popular understanding of the links between sugar-sweetened beverages and obesity, companies like Coca-Cola and Pepsi are looking to sell more of their products elsewhere—especially in developing markets.

The increased focus on countries such as India, Brazil and others is the subject of a new report released Tuesday by the Center for Science in the Public Interest (CSPI), a consumer-advocacy group that has frequently critiqued the beverage industry for its role in the obesity crisis. “These are countries with growing populations, growing incomes and with governments less likely to pursue aggressive strategies to deter consumption," Michael F. Jacobson, CSPI's president and a coauthor of the report, said. And as the report argues, those unfettered new markets will soon suffer from more of the diet-related public health ills that the U.S. is grappling with, from obesity to type 2 diabetes.

Coke and Pepsi, which together account for $870 billion in annual soda sales, are by no means newcomers to the global market. But the sales trends are shifting: Emerging and developed markets have gone from representing about 55 percent of overall soda sales in 2008, according to the report, to nearly 70 percent projected for 2018. Soda sale forecasts for the next three years are flat for North America and declining slightly in Western Europe; sales in Latin America, Asia, the Middle East and Africa are all set to rise.

As Ahmet Bozer, executive vice president and president of Coca-Cola International, said in 2014, “There's 600 million teenagers who have not had a Coke in the last week" and many of them live in these emerging markets. Latin America, for example, is soda's largest market and Mexico infamously has the highest per-capita consumption in the world.

While Coke will funnel huge amounts of money into these markets in the coming years—investing, according to CSPI, $12.4 billion in Mexico between 2010 and 2020 and another $17 billion in African markets—governments are showing signs of moving more quickly on public health policies to combat obesity and the like by limiting soda consumption.

Mexico, after all, passed a national soda tax in 2013, and research shows that it is working to reduce the amount of sugar-sweetened beverages residents drink. A local ordinance in Berkeley, California, now taxes soda and while a similar measure was voted down in San Francisco, the city will soon require health-warning labels on sugary drinks. As India, the Philippines, Indonesia and Great Britain all consider national soda taxes, Reuters said on Monday, “2016 could be the year of the sugar tax."

Whether a soda tax in a country like India—which is already a major market and will see a total of $5 billion in investment from Coke alone between 2012 and 2020—will slow soda sales there and create a protracted battle between government and industry (or both) remains to be seen. But with Indian officials considering a tax as high as 40 percent—much more than Mexico's peso-per-liter tax—it would seem that the political realities are shifting against soda.

But with soda companies blanketing developing countries with billboards, TV ads, sports-team sponsorships and plenty of icy-cold cola, the likes of Coke and Pepsi still hold the popular imagination.

“In regions where poverty prevails and most people do not participate in the world of hyper-consumption, drinking a Coke or other extremely sugary and intensely marketed drink is the result of an aspirational act—the desire to belong to a world from which they are excluded," Alejandro Calvillo Unna, a Mexican consumer advocate, wrote in his preface to the CSPI report.

“Companies take advantage of the vulnerability of those communities to market their products," he continued. “The result: racially and culturally discriminatory marketing practices that worsen the poor health conditions and marginalization these groups already experience."

Illegal Chilean Sea Bass Fishing Could Be Coming to an End, Thanks to Sea Shepherd