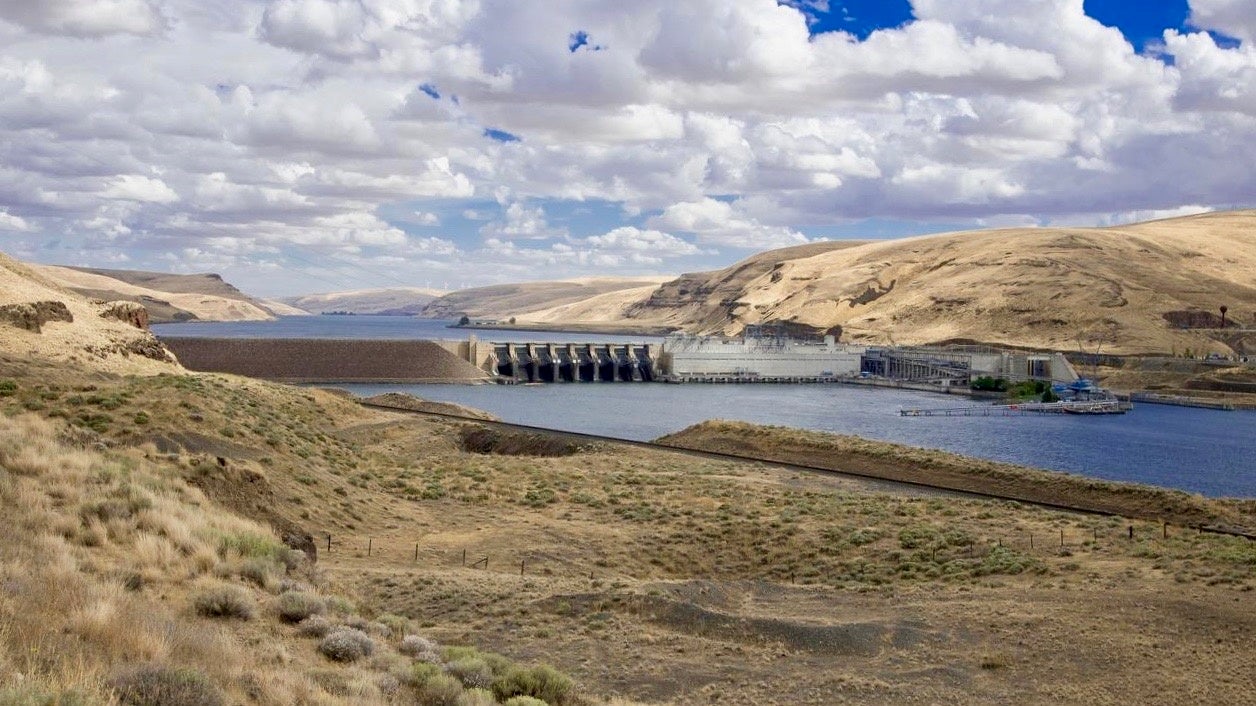 The Little Goose Dam on the Snake River near Starbuck, Washington. U.S. Army Corps of Engineers

Each year, millions of tons of grain make their way along what was once one of our wildest river systems, the Columbia-Snake River. Four dams — the Lower Granite, Little Goose, Lower Monumental and Ice Harbor — erected between 1955 and 1975, ease the way for massive barges bound for ports on the West Coast, and ultimately, markets in Asia. Soybeans, wood products, mineral bulks, and automobiles also travel the river by barge. But outnumbering all other cargo is the soft white wheat grown by farmers from 11 states.

Fourth-generation farmer Bryan Jones is one of those who depends on the Snake River barges to transport wheat from his farm near Colfax, Washington, to a shipping port in Portland, Oregon. Transporting crops via rail or truck, which Jones relies on to get canola, mustard, and cattle to market, are more expensive and less efficient than barge, he argues. In fact, according to the Pacific Northwest Waterways Association, it would require 35 train cars or 134 trucks to move the volume of wheat carried on a single barge. 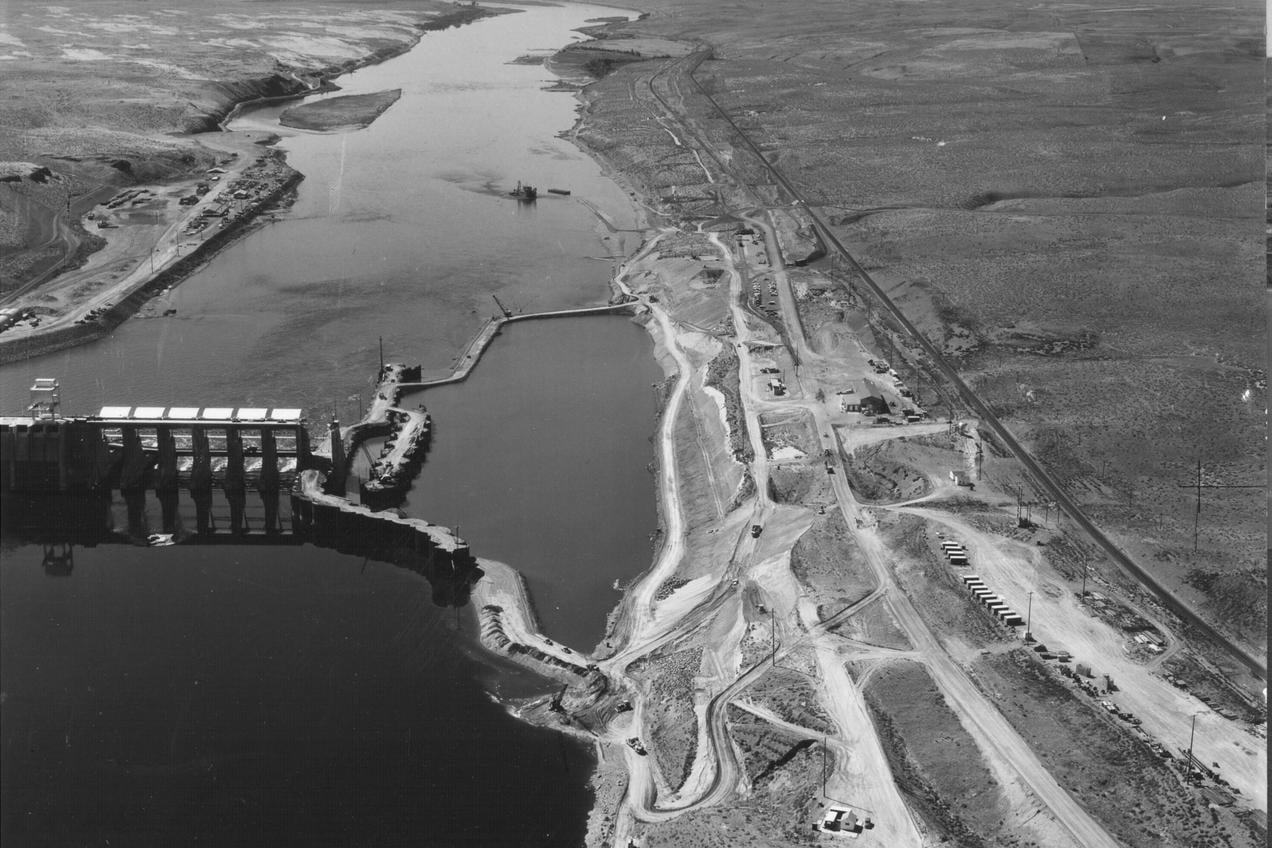 Construction of the Ice Harbor Dam in 1959. US Army Corps of Engineers

“When the dams went in, we closed down the rail lines, and, in doing so, barging was the only way to get our grain to market,” Jones says. “We don’t have the infrastructure to start using rail again, [and] we can’t afford to pay another 50 cents a bushel to ship our grain.”

Nevertheless, Jones acknowledges the steep toll the dams have taken on salmon and is part of a bipartisan, multi-stakeholder coalition searching for fresh ideas to help save them — while supporting farmers, too. Its work is increasingly urgent: From populations numbering 130,000 fish in the 1950s, wild Snake River spring Chinook salmon dropped to approximately 5,800 in 2017. Thirteen populations are listed under the Endangered Species Act, and all four salmon and steelhead populations in the Snake River Basin are at risk of extinction, according to NOAA Fisheries. The dwindling number of salmon is having ripple effects across the food chain. In Washington State, only 73 Southern Resident orcas remain, due in part to the lack of Chinook salmon, their main prey.

In response, wildlife advocates are renewing calls to restore the lower Snake River by breaching the four dams. A recent report released by the NW Energy Coalition, with support from NRDC, found that a mixed portfolio of solar, wind, energy efficiency, demand-response, and storage can replace the power the four Snake River dams contribute to the Northwest. Such a change would increase the system’s reliability and cost ratepayers little to nothing. A free-flowing Snake River would also safeguard salmon from increasingly hot, even deadly, water temperatures, according to modeling done by Columbia Riverkeeper. “We must break the political logjam around this issue. If we don’t, the fish are cooked,” says Giulia C.S. Good Stefani, a senior attorney in NRDC’s Nature Program.

“After looking at the science and economics, our coalition endorsed removing the four dams,” says Sam Mace, inland Northwest project director of the nonprofit Save Our Wild Salmon. “It’s not the only thing that needs to be done to restore the [salmon] runs to healthy, harvestable numbers, but it has to be the cornerstone of any plan that is going to be successful.”

The push to restore the river by removing the earthen portion of the dams has been controversial. More than half of U.S. wheat exports are shipped on the Columbia–Snake River system, making it the top wheat export gateway in the nation and the third largest in the world. As a result, farmers have the most to lose, according to Sam White, chief operating officer for Pacific Northwest Farmers Cooperative.

“You’ve got people who say, ‘Remove the dams at all costs; we want them out, we want to save our salmon,’ and then you’ve got people who are using the river to move products saying, ‘No, [the dams] are important to my livelihood,'” White says. “The closer you are to the river, the more economical it is to use the barge.”

But White also estimates that just 40 percent of the region’s crops are shipped via barge, down from a high of 80 percent a decade ago. Local farmers have diversified their crops, planting canola, peas, lentils and garbanzo beans, which are shipped through alternate ports reached via trucks or rail. And if rail transportation were built out further, Jones says, farmers like him might be able to abandon barge shipping altogether.

Already, there is some progress on this front, and models to follow elsewhere in the Columbia Basin, as with the McCoy grain terminal shuttle train loading facility near Oakesdale, Washington, completed in 2013 with investment from agricultural groups, including the Pacific Northwest Farmers Cooperative. “More companies are trying to make loop rail systems where they can store 100 [railcars] until they’re filled with grain and could be economically shipped down to Portland,” Jones says. “But that’s going to mean building new rail lines or updating older rail lines. A lot of that depends on what finances are put in to [help] companies build rail lines, build storage capacity, and all the things necessary to be able to hold and ship grain.”

Jones believes that offering farmers subsidies to help them adapt to the additional expenses of shipping their grain if dams are removed would be much cheaper than maintaining aging dams. With these supports in place, more farmers would be willing to make the shift, he posits, adding, “I’m pro-dam removal but we have to keep farmers whole.”

After decades of disagreement, there seems to be a growing awareness on both sides that finding a compromise is essential. At the annual Environmental Conference at the Andrus Center for Public Policy at Boise State University in April, participants came together to discuss the theme, “Energy, Salmon, Agriculture, and Community: Can We Come Together?”

In his lunchtime address, Republican congressman Mike Simpson from Idaho acknowledged that the billion investment in salmon recovery from Bonneville Power Administration, the government agency responsible for delivering electricity from the dams, wasn’t working. “I am going to stay alive long enough to see salmon return to healthy populations in Idaho,” he went on to say. “You cannot address the salmon issue without addressing dams…they are interwoven.”

Good Stefani, who was a panelist at the conference, met with Simpson this past summer. He’s been working with partners around the region, meeting with leaders and decision makers to discuss ways to identify solutions that work for both farmers and fishermen, should the dams come out. “Idaho has had abysmal salmon runs, and that’s a huge problem, not just for the ecosystem,” she said. “It’s also an economic hit to the state. Family and local businesses have paid the price — all the way up the river from Lewiston to Orofino to Riggins to Challis to Salmon.”

One official from Idaho’s Department of Labor estimated that salmon and steelhead fishing brings in about .61 million per month to Clearwater and Nez Perce counties alone. But in September, the Idaho Fish and Game Commission had to close all steelhead fishing on the Clearwater River and severely limit fishing on the Snake and Salmon rivers on account of the struggling population. These developments have the local outdoors industry deeply concerned. Last month, a group of about 60 Idaho outfitters and guides met in the Clearwater River Casino near Lewiston to talk about the toll of the closures on their communities.

Idaho tribes, too, have paid incalculable costs. McCoy Oatman, vice chair of the Nez Perce Tribal Executive Committee, spoke as one of the panelists at the Boise conference. He reminded participants of the importance of salmon as a food source, saying, “we’re past the 11th hour” for these fish. “We as tribal people know that.”

The Shoshone-Bannock tribes in eastern Idaho have long been active on the issue. They filed a federal petition in 1990 asking that the Snake River sockeye salmon be listed as endangered. Chad Colter, director of the fish and wildlife department for the Shoshone-Bannock tribes of the Fort Hall Reservation, notes that tribes harvesting Chinook in the Salmon, Grande Ronde and Imnaha rivers recently faced catch limits of three salmon, total, for their entire communities.

“The subsistence path we once followed and our reliance upon the natural riverine ecosystem for that subsistence can no longer be followed or relied upon to provide for our most basic needs of food and water,” Colter says. “As a hunting people, we have gone from relying on fish runs that provided yearlong subsistence resources for our communities to ingesting merely ceremonial amounts of salmon during a short window each hunting season.”

The tribes, according to Colter, want the dams on the Lower Snake River removed to ensure tribal members can harvest salmon from populations that are sustainable, resilient, and abundant.

In Washington State, tribes and conservation groups have ample experience in advocating for dam removal — and maintaining the patience to see their efforts through. Once the decision was made to remove the Elwha Dam and Glines Canyon Dam, it took two decades before the final section of the dams were removed in 2014, but the impacts to the river ecosystem were immediate. Research showed that habitats were restored; salmon, steelhead, and trout repopulated the river; and new species moved in.

Mace believes that sharing those success stories might lead more opponents of dam removal to reconsider their positions. “I have been trying to extend a hand and have conversations with some of the folks that have been traditionally opposed [to breaching the dams], to the communities who use the benefits of the dams, to see if we could come to some kind of understanding at least and see whether there would be a willingness to figure out some solutions,” she says. “We are seeing people take more of a long view. They’re realizing that the salmon crisis won’t go away unless we take some bold actions.”

In the meantime, Good Stefani takes heart in the dialogues being had at forums like the Boise conference. “When we talk face-to-face, we confront the uncomfortable fact that finding a solution is complicated and there is no villain here,” she says. “We have to stop fighting about who has more to lose and start asking what everybody needs. We all want our kids to be able to float and fish these rivers, to know that increasingly rare kind of abundance.”