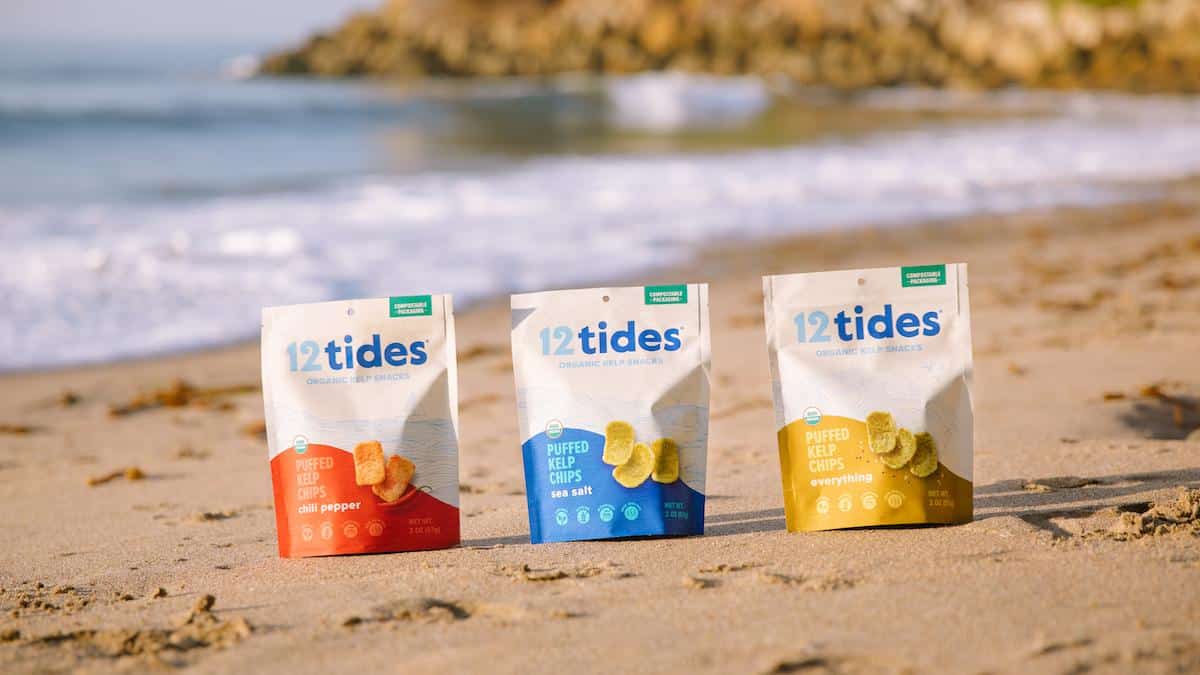 “We started 12 Tides to find a better way for our food system to intersect with our oceans,” Lindsey Palmer said.

When Palmer cofounded 12 Tides with Pat Schnettler, they wanted to address some of the dire challenges facing the ocean — coastline destruction, pollution and overfishing. As an avid diver and someone who spent years in the commercial seafood industry, Schnettler had first-hand experience with these negative impacts of our food system on the ocean. Together, they decided that the future of food was indeed in the ocean and that it needed to start with kelp.

According to the National Park Service, kelp is a large brown algae seaweed that usually grows in undersea forests along rocky shorelines. It grows quickly in nutrient-rich, cold and clear waters. 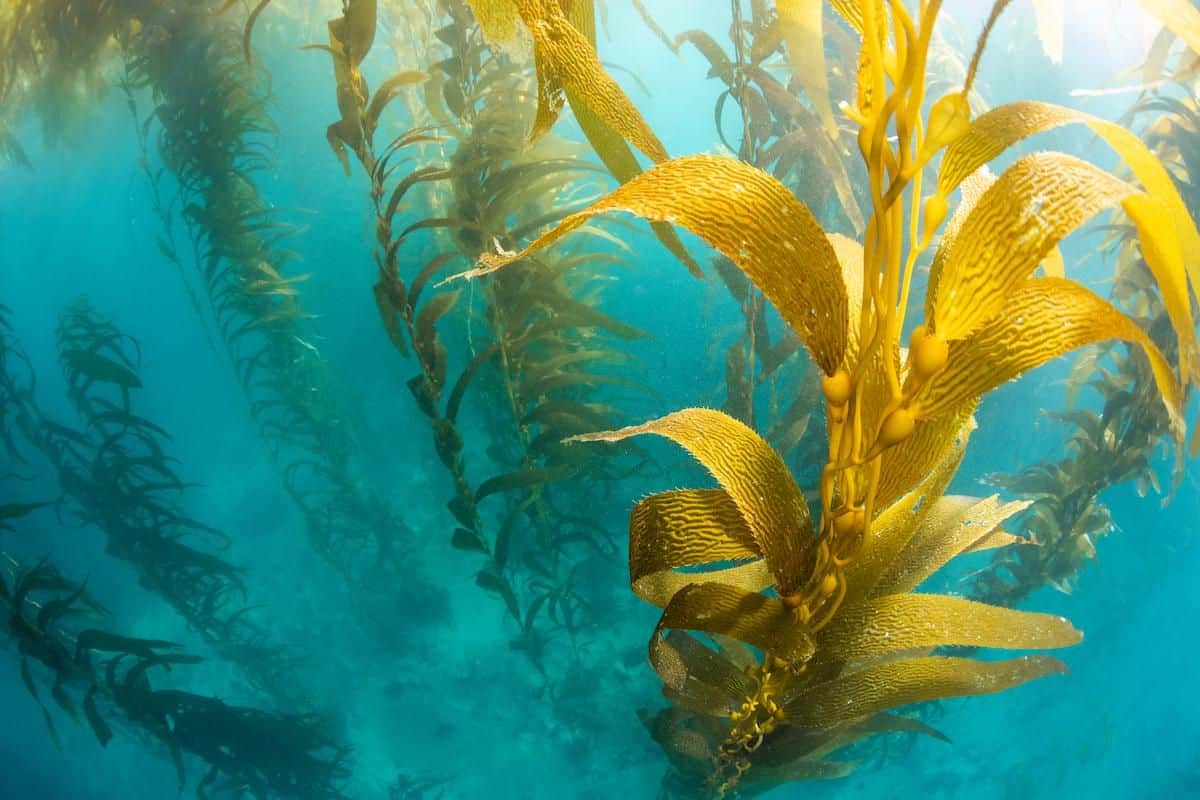 California’s natural kelp forest, off the coast of the Channel Islands, is one of the most important and well-known kelp forests in the world. They’ve declined up to 90%. 12 Tides

“Kelp rocks for so many reasons!” Schnettler explained. “Kelp forests are vital ecosystems that provide food and shelter to a number of marine species — rockfish, sheepshead fish, sea stars, sea otters, harbor seals and shellfish to name a few.” Additionally, kelp forests protect our coastlines from erosion and storm surges by buffering wave energy, he said.

Kelp also acts as a “huge carbon sink,” Schnettler said. Kelp removes up to 20 times more carbon dioxide from the atmosphere than land-based forests, he added. That means foods made from kelp help fight climate change because the seaweed sequesters atmospheric carbon as it grows. Therefore, kelp is considered one of the foods of the future that could help to combat food insecurity while boosting the growing blue economy and saving the planet.

And finally, as a food source, kelp is incredibly nutrient-dense because it absorbs a lot of the great vitamins and minerals that occur naturally in the ocean, Schnettler said. 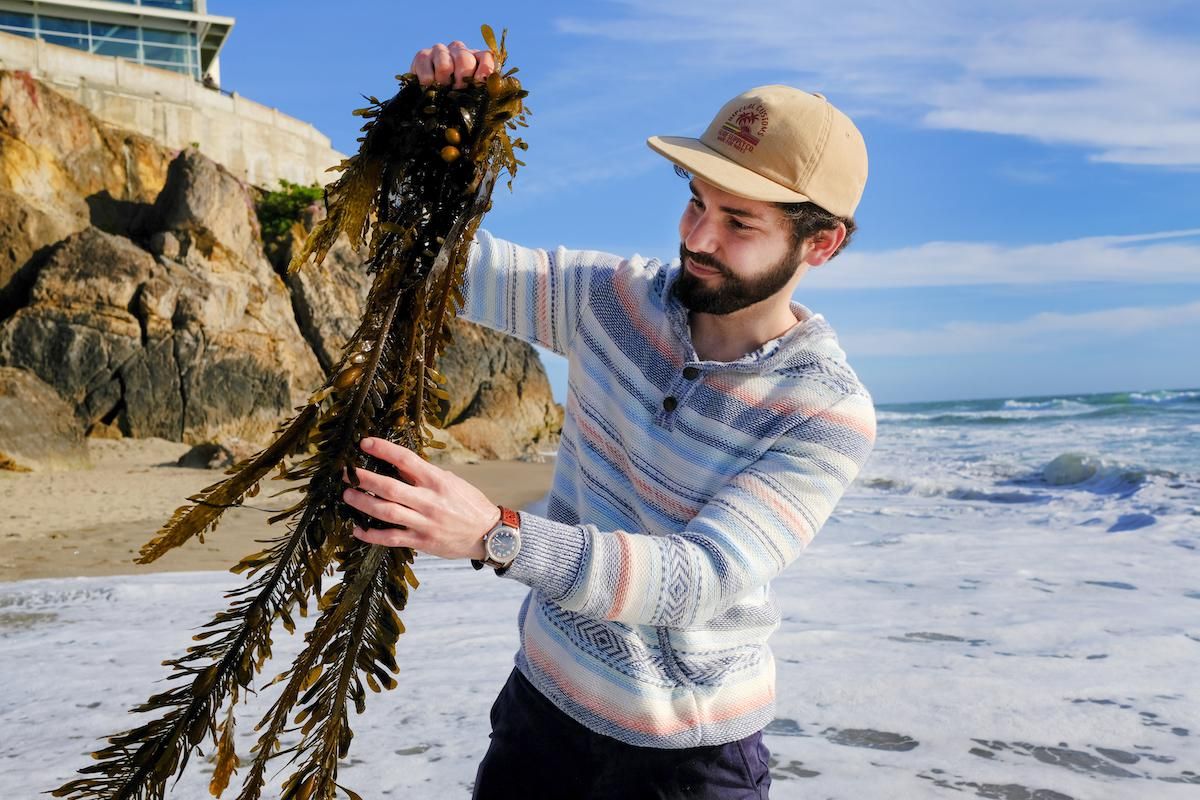 Because kelp addresses many of the ocean issues that bothered Palmer and Schnettler, they created a company to feed people using the seaweed. Sourcing their kelp from small-scale regenerative farmers in the U.S., their snacks are made from sugar kelp that is grown and processed by kelp farmers in Maine. The snacks are manufactured at a 12 Tides facility in San Francisco, CA.

Farming kelp is considered “regenerative” because kelp benefits the ocean environment around it. As a blue carbon sink, it also helps the ocean stave off warming and acidification.

As a food crop, it is “zero-input” — meaning it requires no arable land, freshwater, fertilizers or pesticides, Schnettler said.

Kelp farming as an industry also has a “tremendously positive impact” on the small-scale farmers that 12 Tides works with and the coastal communities they live in, the founders added.

12 Tides was the first company in the world to make regenerative organic kelp chips, a food that recently won the 2021 NEXTY Award for best new organic snack. The flavor is “umami-forward” with a “satisfying crunch” and unique texture, Schnettler said.

“We also appeal to people who aren’t traditionally seaweed fans,” he added. “We’ve heard time and time again that people who don’t like the taste of seaweed are pleasantly surprised after trying our snacks.”

Additionally, all 12 Tides products come in an industrially-compostable pouch to reduce plastic buildup in waterways and the ocean. They’re in the process of certifying a home-compostable bag that they hope to transition to in the future. Finally, 1% of their sales also contribute to SeaTrees, a nonprofit restoring vital kelp forests in Palos Verdes, CA. To date, they’ve helped restore 4,300 square feet of kelp in the area, which has lost as much as 90% of its natural kelp forests.

With their expansion, 12 Tides hopes to feed the planet kelp to ensure a better future for all.