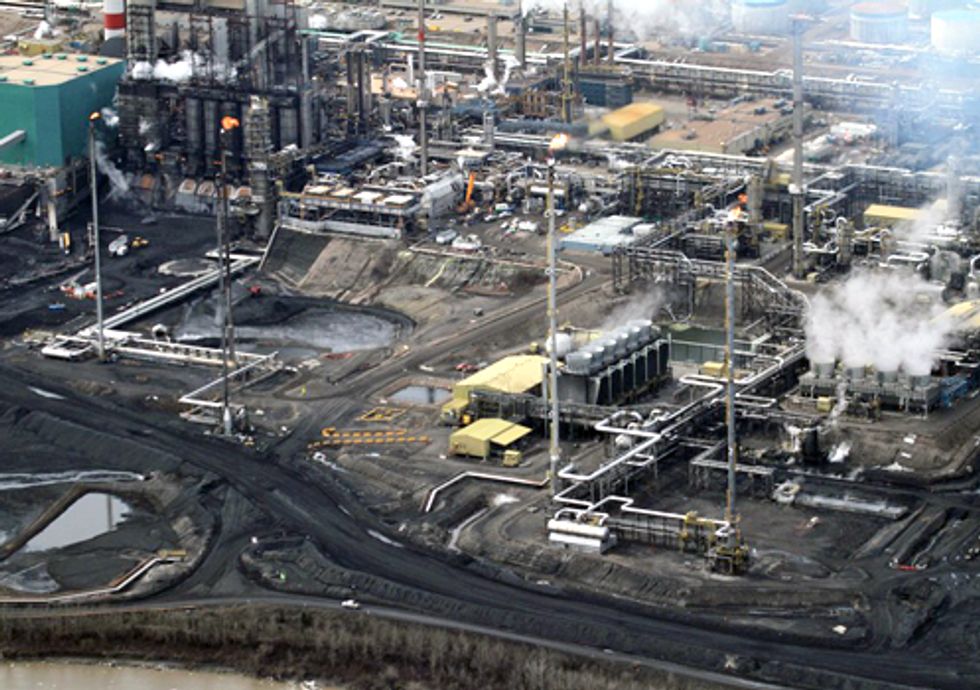 Tar sands processing plant. There has been evidence stacking up for a while that the tar sands are leaving a lethal legacy. And yesterday’s peer-reviewed study adds to the growing evidence of harm.

Chief Theresa Spence is entering what is hopefully her last week of a hunger strike.

The Canadian indigenous leader, and public face for many of the Idle No More movement, has said she will finish her fast on Friday when she meets Canadian Prime Minister Stephen Harper.

The Attawapiskat First Nation Chief has been on a hunger strike since Dec. 11 trying to force Harper into talks with aboriginal leaders.

She vowed not to eat solid food until she gets a meeting with Harper to discuss his controversial Bill C-45, which was approved by the Canadian Parliament in December.

One of the issues Spence and Harper will talk about is tar sands, and how its development is impacting indigenous communities.

Her hand will be strengthened by the latest disturbing scientific research, published in the Proceedings of the National Academy of Sciences, that shows that cancer-causing pollutants are linked to tar sands.

There has been evidence stacking up for a while that the tar sands are leaving a lethal legacy. And yesterday’s peer-reviewed study adds to the growing evidence of harm.

What makes this interesting is that the scientists include those from Environment Canada. It is going to be hard for the Canadian government to dismiss the evidence from its own scientists.

The scientists analyzed sediment dating back about 50 years from six small lakes north of Fort McMurray, the center of the toxic tar sands industry.  The scientists were looking for deposits of cancer-causing polycyclic aromatic hydrocarbons, or PAHs.

And what they found disturbed them. They found levels of PAHs have risen roughly at the same pace as the tar sands development. Results from one remote lake showed PAH levels 23 times higher than pre-development levels 50 years ago.

They also concluded that the contamination covered a wider area than had previously been believed.

This is worrying as PAHs are cancer-causing chemicals. The American Agency for Toxic Substances and Disease Registry says it is well “established” that PAHs are carcinogenic, and have been linked to infertility, immune disorders and fish mutation.

“The signature of the PAHs and the timing strongly suggest that development and the refining of the oil sands plays a role in PAHs increasing in these lakes,” argues Joshua Kurek, from Queen’s University in Kingston, Canada, and lead author of the study.

“Now we have the smoking gun,” argues co-author Professor Smol, another Queen’s University professor, who argues that it is the rate of growth that’s most alarming. “You only have to start doing some back-of-the-envelope calculations of, in 15 years, where they might be,” he said. “But it’s going to get worse. It’s not too late but the trend is not looking good.”

The study is another rebuttal to the oil industry line that oil contamination is from natural oil seeps.

“Hopefully, this will kill the all-the-pollutants-are-natural theory once and for all,” David Schindler, a University of Alberta biologist who co-authored a 2010 study that revealed pollution in the Athabasca River near the tar sands told the Globe and Mail. “I think it’s pretty convincing evidence.”

In response Alberta’s Ministry of Environment and Sustainable Resource Development conceded that “Overall, we do know there is an impact from industry.”

The question that Spence needs to ask Harper is how much toxic local pollution is he going to allow, and how much CO2 pumped into the atmosphere, before he realizes that the tar sands legacy is just too great.