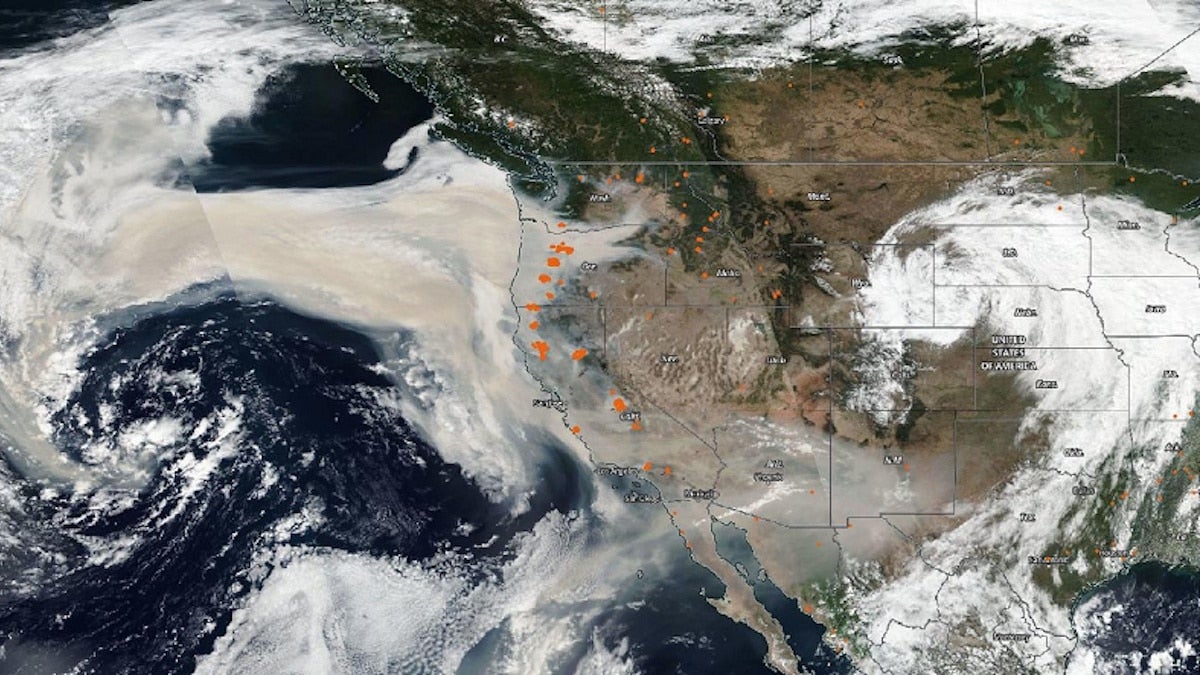 A satellite image shows smoke spreading from wildfires in the Western U.S. on Sept. 11, 2020. NOAA / NASA

The smoke from the wildfires devastating the West Coast of the U.S. has reached as far away as Europe, officials said Wednesday.

The EU’s climate tracking body, the Copernicus Atmosphere Monitoring Service (CAMS), said it had detected smoke from the fires over Northern Europe, 8,000 kilometers (approximately 4,970 miles) away from its origin, as an AFP story published by France24 reported.

“The fact that these fires are emitting so much pollution into the atmosphere that we can still see thick smoke over 8000 kilometres away reflects just how devastating they have been in their magnitude and duration,” CAMS senior scientist Mark Parrington said in a press release.

CAMS said smoke from the fires first reached Europe last week and is expected to do so again at the end of this week.

🔥#Smoke from the unprecedented #USFires is moving back across #NorthAmerica from the #Pacific and is on its way to #Europe.

Find out more about the monitoring of fires and their smoke by the #CopernicusAtmosphere Monitoring Service in our latest article➡️https://t.co/st70y5IwUC pic.twitter.com/h7MoM2IBKl

Climate researcher Geert Jan van Oldenborgh tweeted Sept. 11 that the smoke had been observed in Holland.

“The smoke from the western US wildfires has even reached the Netherlands…, turning the sky [grey] instead of blue,” he wrote.

In its report Wednesday, CAMS also gave an account of the scale of the fires themselves. It said fire activity was ten to hundreds times more intense this year than for the U.S. average from 2003 to 2019. Blazes in Oregon and California also emitted more carbon pollution this year than at any time since record-keeping began. So far, they have released more than 30 million tonnes (approximately 33 million U.S. tons) of carbon dioxide into the atmosphere since mid-August, AFP reported.

“The scale and magnitude of these fires are at a level much higher than in any of the 18 years that our monitoring data covers, since 2003,” Parrington told CNN.

The heaviest smoke from the fires was trapped over the Western U.S. for days, CAMS noted, choking Pacific cities with the worst air quality in the world. But a change in the weather Monday began to move the smoke east along the jet stream, according to AFP. In the Eastern U.S., Boston, New York and Maine have all reported smoky, hazy conditions, the Los Angeles Times reported.

“Satellite images this morning show smoke aloft moving over much of the Northeast and Mid-Atlantic,” the Baltimore-Washington office of the National Weather Service tweeted Tuesday. “This smoke is obscuring the sun, and will keep temperatures a few degrees cooler today than what would be observed if the smoke was not present.”

But just because some of the smoke is moving doesn’t mean the West Coast can breathe easy. Portland, OR still had the worst air quality in the world Wednesday morning, according to rankings from IQAir.

The fires themselves also continue to rage. There were 87 burning in 11 states as of Tuesday, CNN reported. So far, the fires have claimed 25 lives in California. In Oregon, as of Tuesday, 10 people had died and 22 were missing.

In California, fires have scorched more than 3.2 million acres, the most on record, burned at least 4,200 structures and displaced more than 60,000 people. Across the West, the flames have consumed nearly five million acres, an area roughly the size of New Jersey, AFP pointed out.