Smart Windows Could Combine Solar Panels and TVs Too 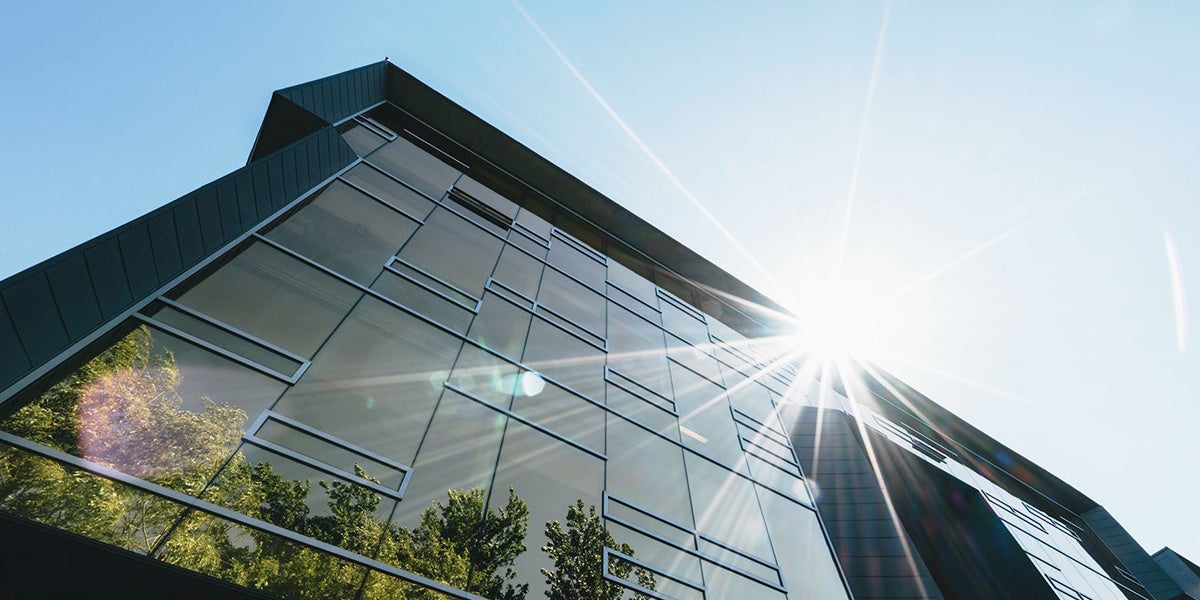 Imagine standing in front of a wall of windows, surveying the view. You hear someone enter the room behind you. You turn. “Welcome,” you say. “Here is the video I wanted to show you.” At the press of a button, the view vanishes and the windows transform into a high-definition TV screen.

No, your friend isn’t James Bond, and you aren’t the next Q. Still, even as you watch the video, your window-TV is doing as much to help avert global catastrophe as any Bond-film gadget ever did. You see, it’s also a solar panel, constantly harvesting renewable energy from the sun. The problem of climate change is not a typical movie supervillain, but it’s a trickier problem than Goldfinger posed. Worse, humanity’s efforts to solve it with existing technologies aren’t working fast enough.

The heroes swooping in to the rescue could be a new technology called organic semiconductors, a new way to make materials that conduct electricity only under certain conditions. Most semiconductors in modern electronics are made of crystalline, rock-forming elements like silicon. Organic semiconductors, by contrast, are made primarily of carbon-based molecules. They take less energy to make than conventional semiconductors. A conventional photovoltaic cell, for instance, can take years to produce as much energy as was required to build it; an organic photovoltaic cell takes just months.

However, perhaps the most exciting thing about organic semiconductors is that it’s possible to design molecules that are flexible, lightweight, colored or completely transparent. In the lab I work in, we design and test new small molecules that have specific, targeted properties—like making a simple transparent pane into a window, screen and solar panel.

Each of these research samples is a small organic solar panel made from different molecules, with varying degrees of transparency to visible light. Kerry Rippy

Read Also: Which Window Replacement Companies Are The Best?

Making a solar panel that’s also a window involves a bit of creativity: It has to be something that both absorbs light, to make electricity, and lets light through, to let people see in and out.

Our material takes advantage of the fact that a window only needs to transmit human-visible light; in my lab, we can make molecules that absorb only UV and infrared light, wavelengths of light our eyes don’t see. These are parts of the spectrum we don’t really want to pass through a window anyway. UV light gives you a sunburn. And infrared light is hot: Filtering it out can save on the energy use and expense of air conditioning. It’s true that our method doesn’t capture absolutely all the energy in sunlight, but that’s okay. The amount of solar energy that reaches Earth every hour is more than all humanity uses in a year.

Flipping the Process Around

Organic semiconductors are also useful for making monitors and displays. If you think about it, a screen is basically a solar panel run backwards. It generates light from an electric current. Both solar panels and display screens involve conversions between light and electricity. Just like we can design transparent organic semiconductors, we can design molecules that emit specific colors of light when an electric current is applied.

To make a smart window, we would need to deposit two layers of organic semiconductors—one layer to generate electricity from sunlight and another to emit light—onto a pan of a transparent conducting material, like indium tin oxide. These technologies exist, but are not yet available for sale.

Putting the Pieces Together

Half of this device is already commercially available: Energy-efficient high-resolution OLEDs are a big hit in the marketplace for home and office TVs.

Companies selling organic solar panels, and even organic solar panel windows, are just getting going. Ongoing research efforts, like mine, are aimed at optimizing the properties of these materials, increasing their efficiency, and making them more durable.

As we make the components better, we’ll also find ways to integrate organic-semiconductor solar cells and organic-semiconductor displays together. It may be a few years out yet, but there is certainly incentive to do so, with so many possible applications. An electric car with smart windows could collect enough solar energy to drive the car 10 to 15 miles a day, enough for a typical commute. Driving directions could appear on the windshield, too. Anywhere there’s a window—whether in a skyscraper or a mobile home—there could be a smart window, saving space, saving energy and letting the occupants feel like James Bond.