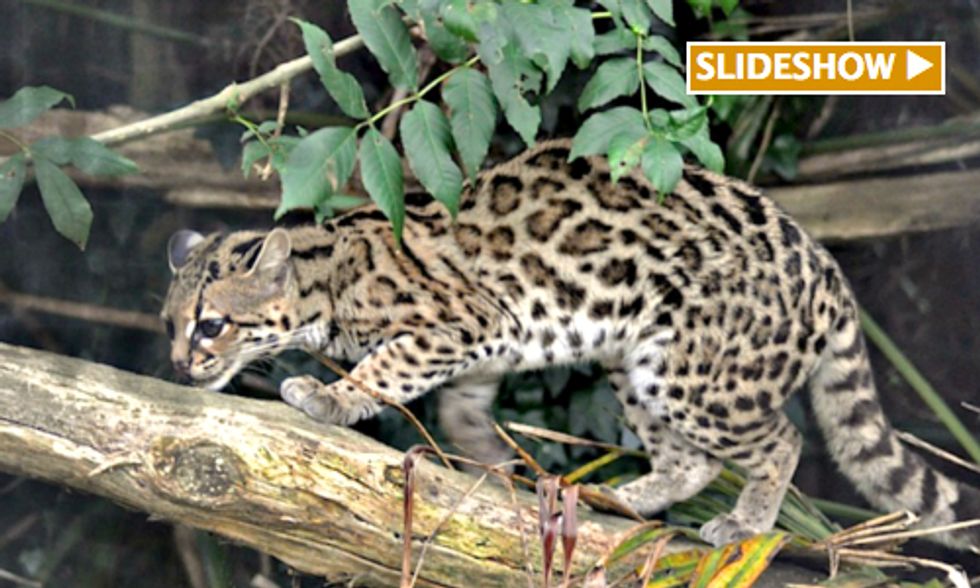 Dipping through the underbrush, in the jungles of Borneo or Bangladesh, a fierce predator slinks. Orbed, glowing eyes glance out from an angular, feline face, as it soft-steps through the shadows. All creatures small—whether mammal, bird or insect—flee at this predator’s approach. Indeed, it is only these smaller animals that have cause for fear: our predator is about the size of a house cat.

Yet unlike a house cat, an encounter with a small wildcat is an exceptional rarity. Relatively few people can name wildcat species, and fewer still have laid eyes upon one outside of zoos. As with lions, tigers, and leopards, most small cats’ conservation status wavers between threatened and critically endangered. However, there’s a huge disparity in the amount of funding small cat conservation receives vs. big cat conservation.

According to the Small Wild Cat Conservation Alliance, a nonprofit dedicated to small cat preservation, the seven iconic big cat species have received 99.22 percent of all funding for cat conservation since 2007. In contrast, the 22 known small cat species around the world received 0.78 percent.

In all, there are 36 known feline species in the wild, spanning continents and habitats. Nearly three-fourths of these are the size of a domestic house cat or slightly larger. Very little is known about most of these small cat species, which is partly why it’s hard to get funding for conservation projects dedicated to them.

But each of these small cats is charismatic in its own special way. In South Africa, for instance, local legend says that black-footed cat, which stands an imposing six inches tall, is so tenacious it can take down giraffes. The marbled cat found in South and Southeast Asia was caught on camera climbing down a tree trunk headfirst—a behavior previously thought reserved only for margay and cloud leopards. And the Asian fishing cat is an adept swimmer and diver, hunting primarily by diving into rivers and streams to chase fish. And some small cat species, such as Borneo’s bay cat and the Andean cat in South America, are so rare that conservationists will fly around the world for an opportunity to see one.

One such conservationist is Dr. Jim Sanderson, founder and director of the Small Wild Cat Conservation Foundation. The foundation began in 1996, with a mission to ensure small cat survival in their natural habitats worldwide. The organization works with local partners in regions the cats reside.

Sanderson attributes the funding divergence to awareness. Everyone knows the larger, more iconic species, but their smaller relatives’ obscurity means they are overlooked.

“Great apes are an example,” Sanderson explains. “There are many species of primates, and none of those come to mind. It’s those little things that are slipping away under the radar, and it’s all about awareness.”

“In Borneo there’s a lot of illegal gold mining and river disturbance you have these dredges that are diesel-powered churning up the river bottom looking for gold. The river goes down brown. It’s destroyed. That takes away habitat from the fishing cat and the flat-headed cat,” he says.

The cats’ rarity and the exotic myths about them make them prime targets for poachers and traders who hunt them for their fur, believed medicinal value and for the captive pet trade. In some places the cats are eaten or used for medicinal rituals by the locals, but more often, they are snared or poisoned in retaliation for killing chicken or other livestock. Feral dogs too, sometimes hunt down and kill wild cats. The cats, however, pose no threat to human safety.

The small cats’ plight speaks to a larger trend in conservation. Iconic species take the spotlight, receiving attention and funding, and the lesser-known species fall through the cracks. According to the United Nations Environment Program, an estimated 150 to 200 species go extinct every day. The International Union for Conservation of Nature estimates that a staggering 36 percent of Earth’s species are threatened by extinction.

An ethical question common in conservation circles is how do we value one species above another. Given limited funding and time, circumstances necessitate protecting some organisms more than others. Tierra Curry, a senior scientist at the Center for Biological Diversity, lends some insight into a conservation organization’s priorities.

“Often the need to engage in a campaign to protect a particular species is urgent and immediate,” Curry says. “Species with limited ranges and very high threat levels rise to the top of the priority list for obvious reasons.”

However, geographically strategic approaches can also have a high impact, she says “In addition to addressing the species that are in very hot water, we attempt to launch campaigns to safeguard as many imperiled species as possible over broad geographic areas,” she says. “In this time of rapid human population growth and increasing resource demand, every single species that we lose unravels a piece of the ecosystem that we all depend on for survival and wellbeing.”

Sanderson points to one simple thing that people can do to help small cats. “Read the labels.” For example, products containing palm oil generally contribute to the deforestation that is squeezing cats out. And buying shrimp raised in Thai industrial ponds deprives fishing cats of their habitats. Such thoughtfulness in consumer choices can help these species’ survive.

“I hope we don’t have to have a crisis to mobilize funding. We want to keep moving in the right direction,” Sanderson says.