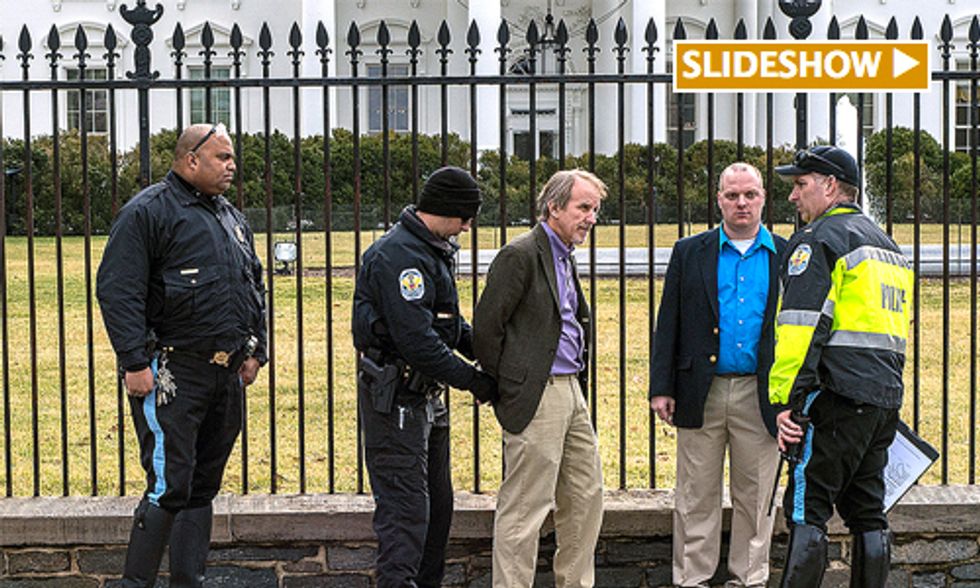 You wouldn't know it from the lack of focus and attention by the environmental establishment, but the 485-mile southern leg of TransCanada's Keystone XL tar sands pipeline has been built, is being filled and is scheduled to start up on Jan. 22. Front line reports from landowners in Texas and Oklahoma say that TransCanada has patrol planes flying up and down the line, with foot patrols searching for leaks. In a few short days, this 485-mile fuse to one of the biggest carbon bombs on the planet will be lit.

Desperate to stop this, several prominent Texas landowners urgently requested a face-to-face meeting with President Obama in early December, only to be spurned by the White House. In response, I spearheaded an emergency direct action on Jan. 15, the 85th birthday of Martin Luther King, Jr., outside the White House to demand that the President order the shut down of Keystone XL south.

It was there that a brave young man of faith, Jason Miller of the Franciscan Action Network, joined me to bear witness to this grave injustice being perpetrated against our children and future generations. Supported by our brothers and sisters from Interfaith Moral Action on Climate, we took direct action that ended in our arrest. One of those brothers, Rev. Lennox Yearwood, inspired me to describe it as civil resistance to ensure our civil existence. It was in the spirit of Dr. King, and what he called "the fierce urgency of now," that I went to jail to stop Keystone XL South.

What's happening right now in Texas and Oklahoma is deeply immoral. If President Obama does not exercise his executive authority to stop the southern leg of Keystone XL from starting up on Jan. 22, he will have committed one of the most destructive acts any president has ever committed against our children and their future by knowingly exacerbating the climate crisis. No amount of greenwashing by the president, or his political enablers, will remove the stain of Keystone XL south from his legacy. It will be forever remembered as Obama's Keystone XL pipeline.