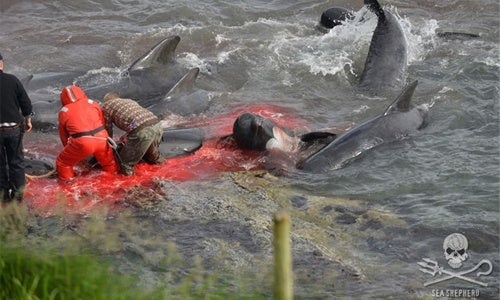 For everyone who cares about the lives of pilot whales and dolphins, I am happy to say that Sea Shepherd’s Operation Sleppid Grindini campaign is being well received by the international media and has gone viral on social media. On Monday, I did a national news interview in France and later spoke to Russian television. Over the last few days, the story of the slaughter of the pilot whales has been carried throughout Europe, Asia, Africa, Australia and North and South America. There is increasing global awareness and we have no intention of allowing the world to forget the horror of the Grind.

We need to keep the pressure on. More Sea Shepherd volunteers may be arrested, more boats may be seized, but what is at stake here are the lives of intelligent, self-aware, beautiful, socially complex, living, feeling and sentient beings. 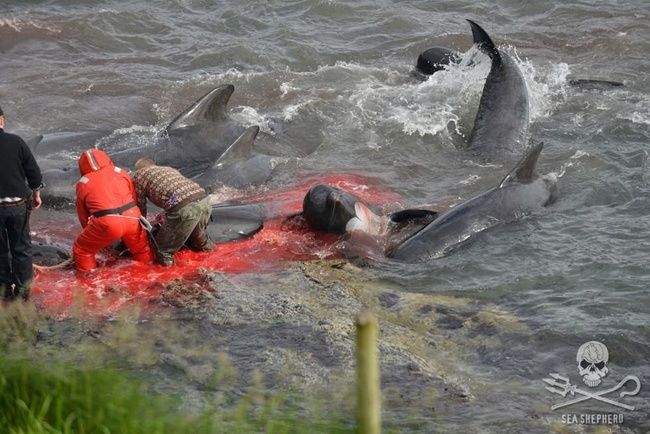 With this obscene abomination they call the Grindadráp (the murder of whales), the Faroese whalers disgrace not only Denmark, but all of humanity. Photo credit: Sea Shepherd/Mayk Wendt

They deserve the risks we must take and the sacrifices we must endure to stop this carnage.

Our enemies, the whale killers, have absolutely no comprehension of the empathy we hold in our hearts for these pilot whales and dolphins. They have no understanding of the risks we have taken and why we have taken such risks to defend life in the sea. They dismiss us, they laugh at us and they seek to hobble us with discriminatory laws and to hamstring us with arrest and seizures.

They simply have no idea of the passion that motivates our actions and our commitment to the aggressive non-violent defense of life and diversity.

Their lack of understanding is seen in their constant accusations that Sea Shepherd opposes the Grind for profit—a ludicrous charge, but understandable because people who do not comprehend compassion tend to place value only on money. Sea Shepherd volunteers do not do what they do for money, but this is a concept alien to people whose hearts are gilded with the lust for gold. They see value only in the things they understand.

Does Sea Shepherd raise money from the public? Of course, how else could ships and campaigns be financed? However the money received is given voluntarily by compassionate people, unlike the subsidies given to the Faroese by European taxpayers who have no say in where their tax dollars go and most of whom are angry that they are unwillingly helping to support a cruel slaughter of whales that is illegal under the regulations of the European Union.

The Faroese try to cast themselves as the victims, constantly saying they kill the whales for meat and thus implying that they depend upon this slaughter for survival when nothing could be further from the truth. The Faroese enjoy one of the highest standards of living in the world. They have one of the highest per capita incomes in the world. They have an industrialized fishing fleet, salmon farms and sheep and they trade these commodities for all the benefits of a materialistic society. They want for absolutely nothing, except for their insatiable lust for blood.

They kill whales because they like to kill whales and they want the support of Danish subsidies and the Danish Navy to back up something that is illegal under the laws of Denmark—and the Danes are doing exactly that.

And that is the reason that Sea Shepherd has decided to focus on Denmark.

For the Danes to say this has nothing to do with Denmark is untrue.

Danish warships are defending the hunt with two warships including a frigate, helicopters, small boats and hundreds of sailors, at an enormous cost to Danish and European taxpayers. The Danish Prime Minister has a Faroese wife. The Royal Family says nothing. And not one word of criticism from a single Danish Member of Parliament. These facts speak for themselves.

The Grind is just as much a Danish issue as it is a Faroese issue.

Danish complicity is something new. There was no Danish intervention in the years prior to 2014. They did not send their warships in the past. They are doing so now.

Whaling industry claim a whale dies within mins. Truth is it can last for over an hour… https://t.co/BczzjDoLqr Pls RT! #UltimateDeathScene
— Captain Paul Watson (@CaptPaulWatson) July 29, 2015

This translation from a Faroese newspaper yesterday demonstrates that the Faroese and the Danes are concerned about Sea Shepherd’s focus on Denmark:

‘It is Denmark who is evil. Denmark should be boycotted. The logic is: Denmark has responsibility over the Faroese. It is Danish police. It is Danish authorities. The police are financed by Danish tax money. Because of this it’s the Danish, who should stop what’s happening,’ says Sjúrdur Skaale about the message from Sea Shepherd. Sjúrdur Skaale says, that the email accounts of parliament members, has a very strong spam filter, which makes sure, that the parliament members don’t receive unwanted emails. So he is surprised about all the emails which are now sent. Sjúrdur Skaale says, that neither him, nor the parliament members he has spoken to, has ever experienced such aggressive storms of emails ever before.”

We need to keep the pressure on Denmark and the message must be that the civilized world will not tolerate this horrifically cruel and ecologically destructive slaughter.

When the beaches of the Faroes run red with blood, the world must respond with the red-hot passionate anger of outrage and disgust.

With this obscene abomination they call the Grindadráp (the murder of whales), the Faroese whalers disgrace not only Denmark, but all of humanity.

Dentist From Minnesota Pays $50,000 to Kill Cecil the African Lion