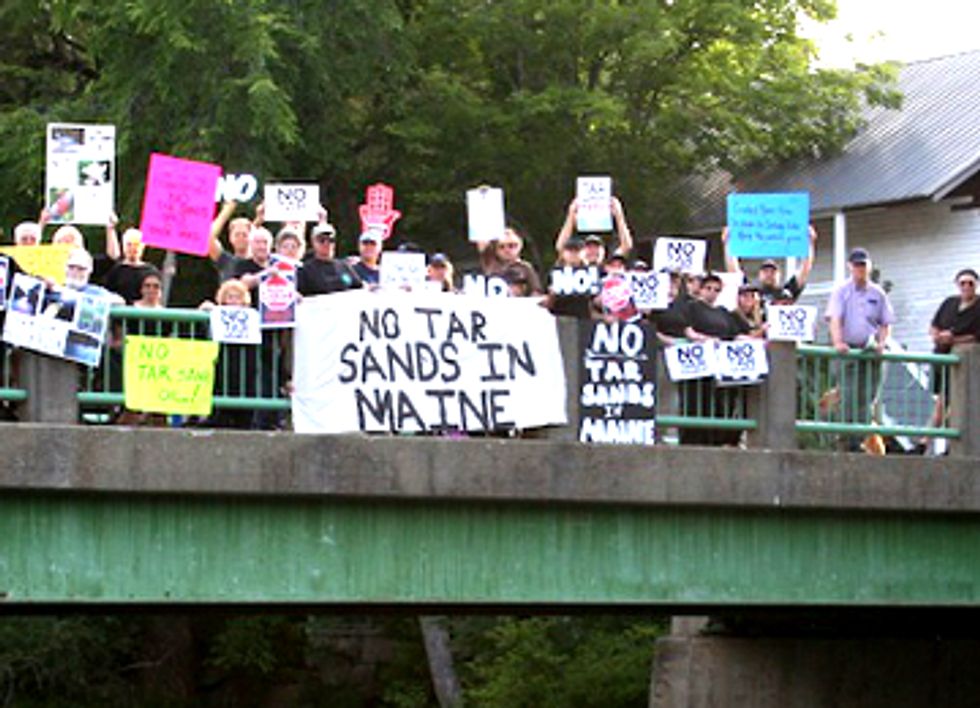 The 62-year-old pipeline, which stretches 236 miles from Montreal to South Portland, is being considered for the transport of tar sands, a form of toxic, thick oil that is associated with higher incidence of pipeline spills and can be nearly impossible to clean up. The pipeline stretches five miles through Harrison and crosses the Crooked River near Plains Road. The pipeline also passes through critical wetland habitat along the Crooked River watershed.

The Portland Montreal Pipeline crosses the Crooked River six times including once in Harrison. Photo courtesy of NRCM.

“Here in the Lakes Region, our lakes, rivers and streams are our livelihood and an important part of our economy,” said longtime Harrison resident Ray Sirois.

“Tourism represents the largest sector of Maine's economy. People come to Maine and the Lakes Region to fish in our clean rivers, to boat on our healthy lakes and to enjoy peace and quiet," continued Sirois. "Tar sands is a direct threat to both our environment and economy and that’s what this vote is about; regular citizens not wanting to place it all at risk."

The resolution stated serious concerns about the environmental and public health hazards of tar sands in the context of a town and region heavily dependent on a clean environment for recreation, tourism and the economy at large. Concerns about threats to water quality also motivated the resolution.

Over 50 local residents rally on the Bolsters Mills Bridge over the Crooked River in Harrison, ME, on July 25, 2012 to say no to tar sands in the Lakes Region.

The resolution calls upon elected leaders to help ensure any tar sands pipeline proposal gets a complete environmental impact review, something that can be required by the U.S. State Department for cross-border pipelines. More than 30 towns along the pipeline have already passed similar resolutions including Casco, Waterford, Raymond, Bethel and Portland.

“I’m pleased to see this resolution pass because a tar sands oil spill in Harrison would be a disaster,” said longtime Harrison resident Jane Dann. “Ultimately, our children and grandchildren will need to live with this pipeline in their backyards for years to come. We should not put their future at risk by sending toxic tar sands oil through the pipeline.”

“We congratulate the town and citizens of Harrison on passing this important resolution,” said Todd Martin, outreach coordinator for the Natural Resources Council of Maine. “Once you learn about tar sands and pipelines, it’s not hard to see that it would be a bad deal for Maine.

A RESOLUTION TO PROTECT THE HEALTH AND SAFETY OF LOCAL CITIZENS, WATERBODIES AND OTHER NATURAL RESOURCES IN RELATION TO THE POSSIBLE TRANSPORT OF TAR SANDS OIL THROUGH MAINE

WHEREAS the town of Harrison has previously supported local, state and/or federal actions to safeguard human health, ensure the safety of citizens, and protect the environment; and

WHEREAS the town of Harrison benefits immensely from the pristine lakes, rivers, streams, and ponds that define our region and that have for generations provided recreation for residents and tourists alike, and which enhance  property values and generate substantial economic activity that sustains jobs; and

WHEREAS the oil industry appears to plan to use an aging oil pipeline, built in 1950, to bring Canadian tar sands diluted bitumen through the Lakes Region to Casco Bay for export, even though the pipeline passes next to Sebago Lake and numerous other lakes, rivers, ponds, and streams in the Lakes Region; and

WHEREAS pipelines carrying tar sands have a greater likelihood of leaks and spills because of the corrosive properties of tar sands and the higher temperatures and pressures involved in pumping the viscous substance through pipelines; and

WHEREAS between 2007 and 2010 pipelines carrying tar sands oil in North Dakota, Minnesota, Wisconsin, and Michigan spilled almost three times more oil per mile of pipeline compared with the U.S. national average; and

WHEREAS tar sands spills are more dangerous and more difficult to clean up than conventional oil spills; and

WHEREAS in 2010 a pipeline spilled more than a million gallons of diluted tar sands down a 30-mile stretch of the Kalamazoo River in Michigan, creating a public safety, health, and environmental disaster with long-lasting impacts; and
WHEREAS the mining and processing of tar sands requires a vast and destructive industrial operation that emits three to five times more carbon pollution per barrel than the production of a barrel of conventional U.S. crude oil, among many other problems; and
WHEREAS the transport of tar sands oil to and through Oxford and Cumberland counties in the state of Maine would pose unreasonable risks to the health, safety, natural resources, property and/or economic welfare of persons living in the town of Harrison.

NOW, THEREFORE, BE IT RESOLVED, that through the adoption of this resolution, the town of Harrison expresses its opposition to the transport of tar sands oil through Maine, and is deeply concerned about the risks that such transport may create in relation to public health and safety, property values, and the clean air, water, and land upon which the local community depends; and

BE IT FURTHER RESOLVED that the town of Harrison call upon the Maine State Legislature and the United States Congress to ensure thorough environmental impact reviews of tar sands diluted bitumen pipeline proposals, including a complete evaluation of the health and safety impacts of potential tar sands oil spills to Maine’s clean water, air, and land; and

BE IT FURTHER RESOLVED that the town of Harrison support the creation of clear Federal and State guidelines for tracking the origins and chemical composition of various types of fuel so that local governments, citizens, and first responders can better know of, and plan for, the risks associated with the specific type of fuel flowing through or to their communities; and

BE IT FURTHER RESOLVED that the town of Harrison encourage the State of Maine and other states in the northeast to support policies, including a regional Clean Fuels Standard, that help shift oil use away from high impact fuels such as those from tar sands and toward cleaner energy options  available in Maine and the region; and