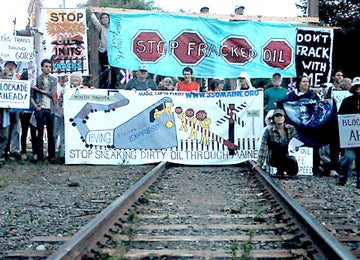 Yesterday, members of 350 Maine attempted to block a Pan Am train as it passed through downtown Fairfield, aiming to prevent roughly 70,000 barrels of crude oil from reaching the Irving Refinery in New Brunswick, Canada. The blockade was staged as part of a nationally coordinated week of action. 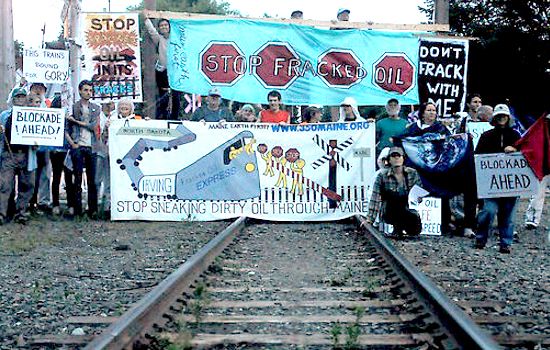 When police arrived last night to break up the peaceful protest, six people who refused to leave the scene were arrested after trying to destroy scaffolding with a chain saw. Local news media reported a surprisingly large number of law enforcement officials who responded to the action, including troopers from the state police.

Trains running through Maine carry crude from the Bakken oil fields of North Dakota, where it is  extracted—fracked—by blasting a high pressure mix of water, silica and toxic chemicals deep into the ground to release the oil from shale rock. 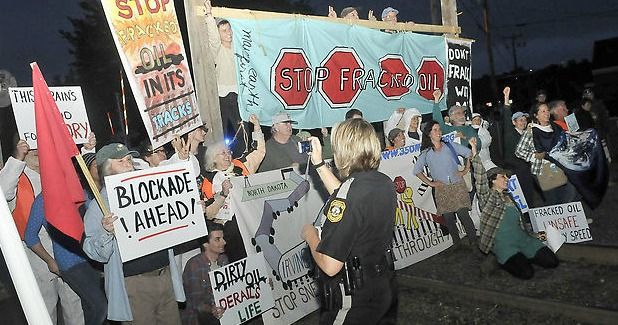 One of those arrested, 63-year-old Read Brugger from the town of Freedom, was clear about his motivations. “We feel there has not been enough awareness about the millions of gallons of crude shell oil that shipped across Maine each month,” Brugger told the local Bangor Daily News. “We feel need to move beyond fossil fuels and get away from the poisonous ways oil is being extracted.”

With fracking technology, previously un-extractable oil, deep underground, can now be reached and is the source of an explosive oil boom in the Midwest. Without enough pipelines to transport the Midwest crude to distant refineries, there has been a surge in the use of trains. Inspections of tracks are infrequent due to lack of resources to oversee them. Rail and energy industries insist that trains are among the safest ways to transport crude. But Pan Am alone had two train derailments in Maine within a calendar year between 2012 and 2013. When one train carrying crude derailed this March in Mattawamkeag, ME, Department of Environmental Protection spokesperson Samantha Warren called the limited spillage “a miracle.” 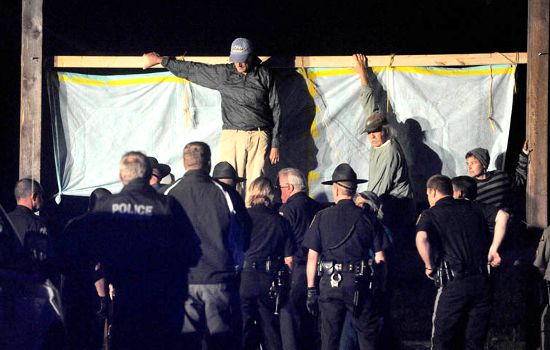 Similar demonstrations are taking place across the nation this week as part of Fearless Summer, a nation-wide grassroots movement of environmental groups, to draw attention to the dangers of fracking and extreme energy extraction.

“We oppose the continued extraction of fossil fuels, but we also oppose its transportation over thousands of miles of environmentally sensitive areas,” said Sarah Linnekin of Benton, student at Unity College. “Since my number one job is to protect my children, I feel an obligation to take action,” she said.