Sit In Continues Demanding a Moratorium on Fracking in Illinois 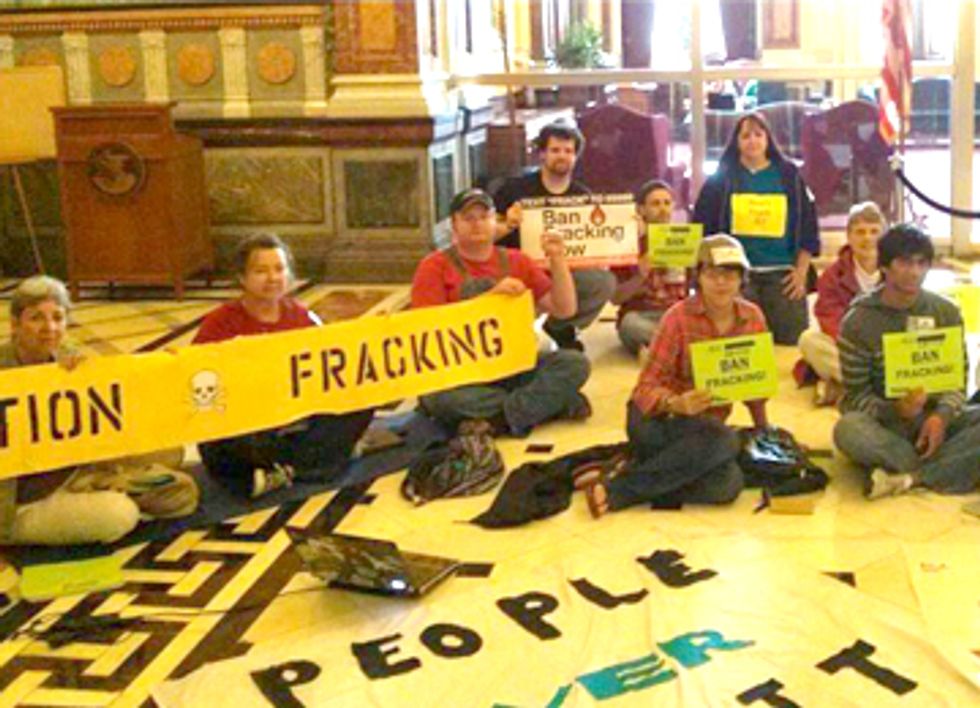 What happens in Illinois, doesn't stay in Illinois—especially when you're dealing with the national ramifications of a combined fracking and coal mining rush unparalleled in recent memory.

As a sit in movement continues at the office of Gov. Quinn in Springfield, IL, besieged southern Illinois residents who have been left out of backroom legislative negotiations over a controversial and admittedly flawed regulatory fracking bill are calling on the nation to contact Gov. Quinn and Lt. Gov. Madigan to put a moratorium on drilling to investigate its full climate and health impacts.

Sit in continues in front of Gov. Quinn's Office in the Capitol Building, Springfield, IL.

Over a half century ago, Nobel laureate William Faulkner confronted Southerners who quietly allowed the South to "wreck and ruin itself in less than a hundred years" with segregation and civil rights violations. He begged his fellow Southerners to "speak now against the day, when our Southern people who will resist to the last these inevitable changes in social relations, will, when they have been forced to accept what they at one time might have accepted with dignity and goodwill, will say: 'Why didn't someone tell us this before? Tell us this in time?'"

That time has come to speak now against the day in Illinois—and the nation is watching.

From water contamination, air pollution to earthquakes in one of the nation's most deadly seismic zones—conferring with a U.S. Geological Survey, there is already a 90 percent chance that a magnitude six or seven earthquake will occur in the New Madrid seismic area within the next ﬁfty years—the unleashed fracking rush promises to not only leave southern Illinois in shambles.

If passed, Illinois' so-called historic compromise of regulatory doublespeak—hailed by Gov. Quinn as "a new national standard for environmental protection and job creation potential"—will open the floodgates for similar fracking operations across the nation.

And not only fracking. Unleashed under the same illusory regulatory guise, Illinois is the midst of one of the biggest coal mining rushes and export pushes in the nation.

Illinois is now standing in violation of state law for failing to provide enough coal mining inspectors. How can we imagine fracking oversight will be any different?

In effect, Illinois and its Mississippi River banks are becoming another ground zero, like the Canadian tar sands and Keystone XL pipeline, in the battle over the unfolding climate change crisis.

My son and I stood on the banks of the Mississippi River last month, watching the spill over from the latest floods.

"We have to do this together as a family," Illinois Gov. Pat Quinn had told rain-drenched reporters in Chicago. "When we have any kind of emergency, we work together for the common good. We help each other." Indeed, it is the common good of my son's future, the ninth generation of my family to be born in Illinois, that concerns me.

Within days of Quinn's declaration of a state of emergency, two more historic announcements made their way down the famed river.

With little fanfare in the media, scientists confirmed carbon dioxide (CO2) levels had crossed the 400 parts per million milestone for the first time in human history, as the inevitable current of climate change passed in front of our eyes. No one blinked at this Titanic foreshadowing.

At the same time, Gov. Quinn announced Illinois had recorded a five-fold increase in coal exports in 2012, thanks largely to the Mississippi River's historic trade corridor.

Quinn's Department of Commerce and Economic Opportunity called it "truly an unbelievable achievement." Given the fact that coal burning remains the world's leading source of CO2-induced climate destabilization, according to the U.S. Energy Information Administration, it's truly an unbelievable act of denial.

In the last few months, Illinois has witnessed near-record-low water and then torrential flooding. At the first of the year, government officials spoke about potentially shutting down shipping lanes on the river, due to a drought that had brought water depths to only nine feet in some areas.

"While the conditions are much different than they were this winter, the effects are quite the same," a Coast Guard spokesperson told the media last month, as he handled the sinking of 11 coal barges in a recent accident.

How much longer can we afford this river of denial until our own ships in southern Illinois, the heartland and across the nation sink?

The answer to that question will only come when we recognize the emergency at hand, in the words of Gov. Quinn, and work together for the common good. And that begins with calling for a sensible moratorium on fracking.