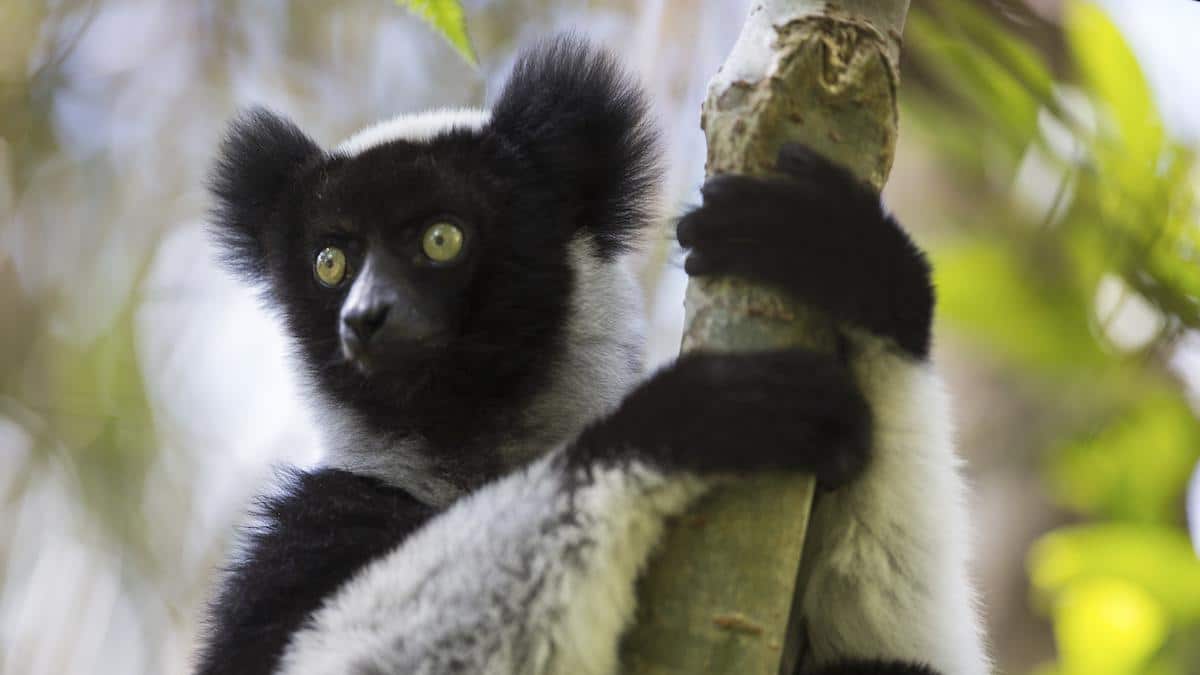 Indris are a lemur species native to the coastal and mountain rainforests of northeastern Madagascar. Filippo Carugati

How and why did humans develop rhythm?

The question remains a mystery, but now a research team from the University of Turin have found help from an unexpected source.

“We have discovered that the way a lemur called indri sings its songs is very similar to the way we sing ours! They have our very same rhythm,” study co-author Chiara De Gregorio told EcoWatch in an email.

Scientists have traditionally taken one of two approaches to understanding the evolutionary and biological origins of human music, the study authors explained in Current Biology:

The researchers combined the two approaches by looking for categorical rhythms in Indri indri, a species of lemur that is one of the few singing primates.

The study authors defined categorical rhythms as “those where temporal intervals between note onsets are distributed categorically rather than uniformly.”

Why did the researchers want to find rhythm categories in the lemurs’ musical stylings?

“Rhythmic categories are a very important musical feature, as thanks to them, any song sung at different tempi will still be recognizable, so they might be essential in deciphering the signal,” De Gregorio explained. “Moreover, these categories might play a role in songs’ acquisition and, possibly, learning.”

The researchers did indeed hear both categories in the indris’ singing, which may open up important clues to the origins of our own musical abilities.

“Our results can be an important piece of evidence towards our understanding of the origins of our rhythmic abilities, our love for dancing and our passion for music,” De Gregorio said. “Despite being so important in our daily life, the ultimate reason for the existence of rhythm and music is still highly debated. Finding in indris musical universals may indicate that human music is not truly novel but its intrinsic musical properties are more deeply rooted in the Primate lineage than previously thought.”


The duet of the indris: the female is singing with the reproductive male (out of view) and her son.

Indris are a lemur species native to the coastal and mountain rainforests of northeastern Madagascar, according to Animal Diversity Web. They have black, tufted ears, and their face, shoulders, back and arms are usually black as well. They are the largest lemur species, weighing up to 10 kilograms (approximately 22 pounds.)

They are also one of the few primate species that sings, a Max Planck Society press release explained. Typically, they sing in family groups, harmonizing duets or choruses. To get a chance to record these songs, the researchers spent a total of 12 years in the field with the indris. De Gregorio said this field work was challenging, but fun.

“Indris live all their life up in the canopy of Madagascar’s rainforest, jumping from tree to tree, up and down the hills,” De Gregorio said. “So, for many years, we have followed them in the humid forest, in every weather condition, for 8-9 hours a day. But they really are amazing creatures, and I feel really lucky to have the chance to work so closely with one of the most endangered primates in [such a] preserved pristine rainforest!”

Will the Beat Go On?

Like most lemurs, indris are primarily threatened by deforestation for subsistence agriculture and charcoal production. Madagascar has lost 44 percent of its rainforests in 60 years, and almost half of what’s left is located within 300 feet of an unforested area, anthropologist Andrea Baden wrote in The Conversation. Illegal hunting also puts indris at risk, IUCN said.

So will our musical cousins soon be forever silenced?

“We are very worried for indris’ survival: at the moment, every attempt to build captive populations have failed and their habitat is vanishing at a very fast rate,” De Gregorio said. “They still have so much to teach us, and our research group is working very hard also for their conservation. We hope that this exciting finding can also bring attention to their critical situation.”