Simple Solutions for Coexistence of Wolves and Livestock 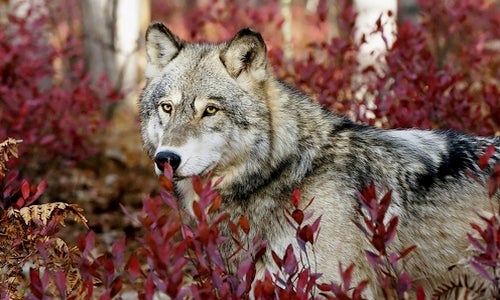 The night sky was completely dark except for the light from the Milky Way when I heard the dogs starting to growl. They could hear movement in the woods near the sheep bedgrounds and were automatically on guard. Wolves were denned not far away but I couldn’t yet tell what had the Great Pyrenees on edge. A few sheep baaed sleepily in response to the growls. The band of ewe sheep had been anxious lately after their lambs had been separated from them to be shipped to market. In the starlight, I could still make out the snowcapped peaked of central Idaho’s majestic Sawtooth Mountains across the valley. 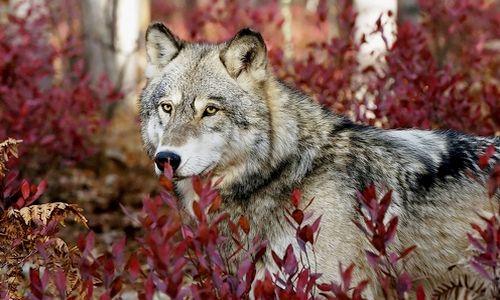 The wind stirred fluttering the aspen leaves in the trees around me as the dogs starting circling around the sheep, growling deeply. In the distance, a wolf howled and filled the valley with his lonely song. Coyotes quickly chimed in over the hills to our east. I scrambled out of my sleeping bag and searched for my flashlight but couldn’t find it. I did find the telemetry scanner and flipped it on. Given the summer temperatures, the Forest Service had set a ban on campfires and I could feel the sudden chill of the damp night air. I hadn’t slept well earlier that night because of the noise from the sheep band. The ewes were calling for their lambs until they finally settled down. Even calm sheep are noisy at night though. Whoever invented the fable about counting sheep at night to get a restful sleep had clearly never spent the night with the wooly beasts. My teeth were chattering as I scanned for radio signals. Bingo. The loud steady beep confirmed that the alpha male was close by.

This was my first night on my own at sheep camp as part of the new wolf guardians program, and the year was 1999. I listened to the two dogs as they paced. They were growing even more defensive. A wolf howled closer this time from the direction of the telemetry signal and then gave two short warning barks. Oh great. A train wreck was getting ready to take place. Wolves are usually wary of dogs but these wolves had pups nearby to protect. I had warned the sheep owner that moving his band toward the den site would likely cause a reaction from the wolves as they perceive that the dogs are just funny looking strange wolves and strange wolves are a serious threat to their pups. The dogs started barking loudly and charging toward the sound. I didn’t have any more time to look for my flashlight or my boots. Instead I grabbed the first things that I could find—a metal pot and a wooden spoon—and charged out toward the direction of the signal clanging away on the pot and yelling at the top of my lungs. Seconds later, I could hear a large animal running away through the brush and splashing across the small creek. Half an hour later, the dogs settled back down and I spent the rest of the night watching for falling stars. I counted dozens before I finally drifted off to sleep before dawn.

That night happened 15 years ago; just five years after wolves were reintroduced to Idaho. It was the beginning of my efforts to help local ranchers adapt to co-existing with wolves using nonlethal deterrents to protect their livestock and to help keep wolves from being killed in response to preying on sheep and cattle. 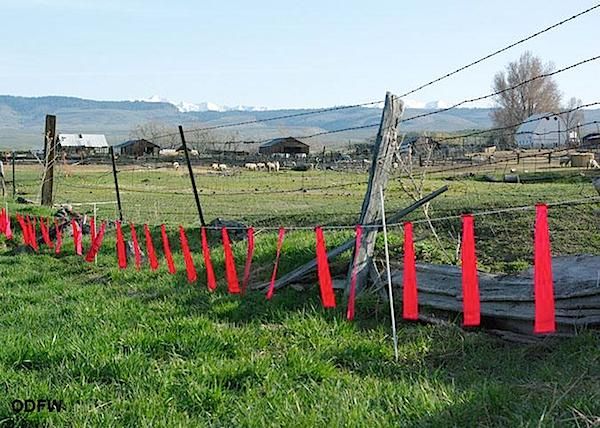 Nonlethal tools like fladry—hanging strips of fabric from fence lines—have proven extremely effective at deterring wolves from livestock without killing them. Photo credit: Defenders of Wildlife

Nonlethal deterrents were ridiculed in those early days. I knew that telling people that I chased off a wolf with a wooden spoon and a metal pot wouldn’t help convince the skeptics so I didn’t share that part of the story with many of the managers at the time. Fladry was a brand new tool being tested (and laughed at) in the Salmon River country. Radio activated guard systems that blared out everything from the sounds of helicopters to rifles firing to rock music when they detected a wolf’s radio signal were being tested and revised for broader use. Few ranchers were willing to embrace these new (and some very old) techniques and were encouraged by the federal U.S. Department of Agriculture (USDA) Wildlife Services’ agents to ignore them and stick with traditional lethal control. A few people stuck with the new tools though. Rick Williamson from Wildlife Services in Idaho revolutionized the fladry system by making it electrified. His wife Carol built miles and miles of the new “turbofladry” by hand on her sewing machine. Rick received a national award for his innovative efforts from USDA, yet many of his colleagues refused to ever try the methods because they felt it would seem to the ranchers like they accepted wolves on the landscape when most deeply resented them.

This week, we held a workshop and field tour highlighting more than a decade of refining and adding new nonlethal tools to our program at the site of the largest nonlethal wolf and sheep coexistence project in the region. In central Idaho’s Sawtooth National Forest—a sheep superhighway and also wolf territory—Blaine County ranchers, county, state and federal agencies, and local wolf advocates are working together to effectively resolve conflicts using nonlethal wolf management and livestock husbandry methods. These methods include deterrents like fladry, livestock guard dogs and electric fencing, that dramatically reduce or eliminate livestock losses and build social acceptance for wolves. And the results are undeniable. For the last six years, a total of more than 100,000 sheep and lambs have grazed across this area amidst wolf packs. Yet fewer than 30 sheep have been killed in the project area during this time, and no wolves have been killed by government agencies in the project area.

These nonlethal control methods are cheaper than lethal wolf management, and Blaine County also has the lowest rate of livestock losses in the state. If you’re interested in learning more about these methods, let us know. We’re always eager to encourage those who have an open mind on the value of working together to resolve conflicts effectively by protecting both livestock and wolves.