The Desperate But Effective Attempts to Silence Climate Scientists 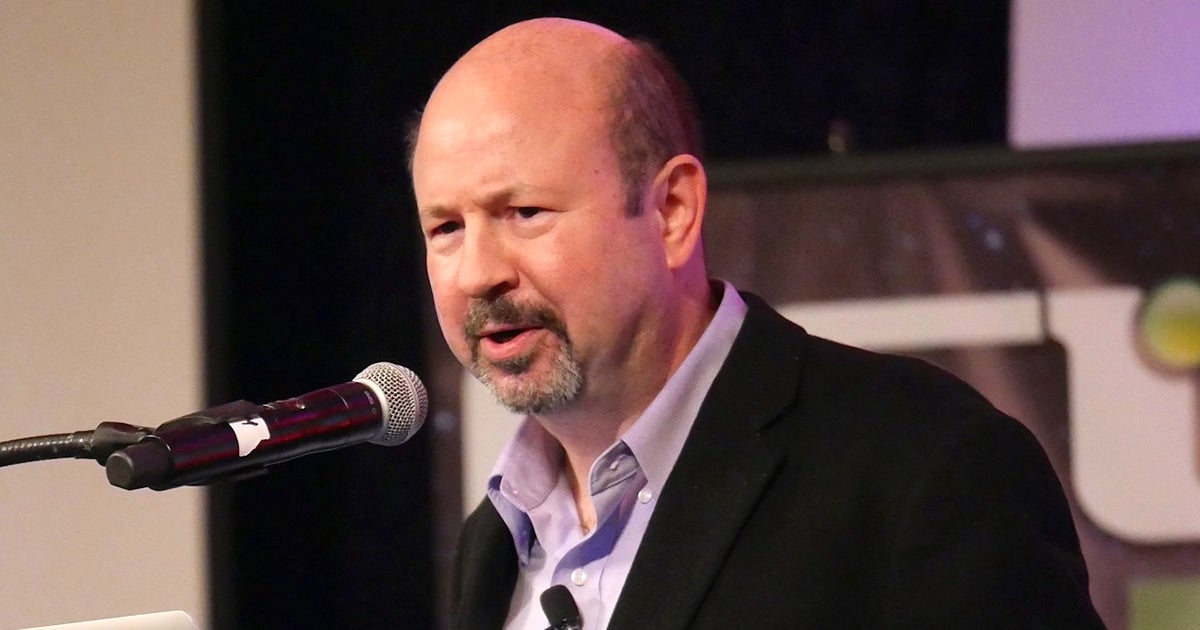 People play dirty when they can’t win by playing fair. This is, more or less, the story of climate change denial in the U.S.

Scientists overwhelmingly agree that humans are altering the climate, reaping changes with potentially catastrophic consequences. Climate deniers can’t dispute the data. They can’t win on facts. Instead, they impugn the credibility of scientists, a tactic which has proved both ugly and effective.

Right-wing groups are using open records laws to obtain scientists’ emails, and then misrepresenting the content of those emails to question the integrity of researchers and cast doubt on their findings, all of which has a chilling effect on scientific inquiry. But scientists have earned powerful allies in the fight to protect their research—including, by a strange set of circumstances, the Trump administration.

“Climategate” led to a wave of harassment.

The current spate of invasive records requests back to “Climategate,” a 2009 controversy that erupted when a hacker obtained more than 1,000 emails sent and received by climatologists at East Anglia university in the United Kingdom. Parts of some emails, taken out of context, suggested scientists had manipulated data to exaggerate the warming trend.

Climate deniers harped on the leaks to paint climate scientists as ideologically motivated and dishonest. Though an official inquiry into the matter exonerated scientists, the damage was already done. Their calls for universities to investigate climate scientists prompted institutional probes that hampered research efforts. Today, conservative advocacy groups point to “Climategate” when making open records requests.

“I think anyone who looks at the whole ‘Climategate’ manufactured controversy understands now that it’s bogus, but that’s the rationale that they’ve used,” said Lauren Kurtz, executive director of the Climate Science Legal Defense Fund, a nonprofit working to protect researchers threatened by legal attacks.

The Energy & Environment Legal Institute (E&E), a conservative think tank with ties to coal and oil companies, cited “Climategate” as the impetus for its “transparency project.” In 2011, the group sued to obtain more than 10,000 emails written or received by Michael Mann, a researcher at the University of Virginia and one of the scientists implicated in “Climategate.” The Virginia Supreme Court sided with Mann, who lamented the “coordinated assault against the scientific community by powerful vested interests.”

That same year, E&E requested more than a decade of emails from University of Arizona climate scientists Jonathan Overpeck and Malcolm Hughes, another researcher ensnared by “Climategate.” E&E’s legal brief alleged there is a “climate scientific-technological elite” which has “behaved badly” in the past, a reference to “Climategate.” In a gesture of surprising candor, E&E acknowledged that it was searching for emails to “embarrass both Professors Hughes and Overpeck,” whom it characterized as “academic climate alarmists.” That suit continues to this day.

The University of Arizona case volleyed back and forth between the trial court and the appellate court, which recently determined the trial court had failed to consider a statute that protects “unpublished research data, manuscripts, preliminary analyses, drafts of scientific papers” and other documents produced by researchers at Arizona public universities.

Now the case will go back to the trial court, which will reevaluate the records request in light of this statute. The ruling is a pyrrhic victory for researchers and the university, who must dedicate even more time and money to fighting off E&E. “That’s basically as good as we could have hoped for,” Kurtz said. Even when scientists win, they lose. 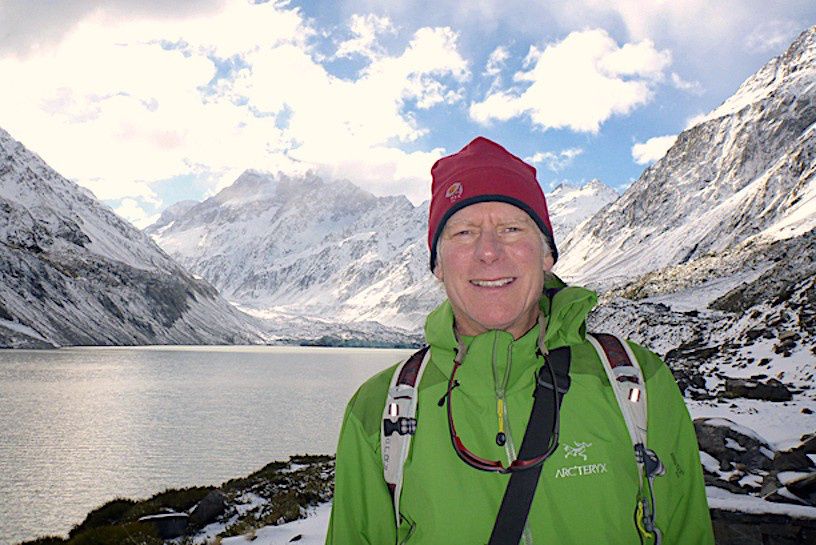 The lawsuit has taken a hefty toll on Overpeck and Hughes. Overpeck said he spent six weeks of his sabbatical sorting through 90,000 pages of emails, explaining the case was a “grave distraction” from his work and family. Hughes spent an entire summer collecting emails, failed to attend to his work and lost a research grant as a result.

These injuries are temporary. More worrisome is the long-term effect that records requests have on research. Hughes noted that, due to his involvement in the case, other scientists have been reluctant to email him. While Hughes is nearing the end of this career, he said that, were he a young man, he would “consider a different line of work or another institution.”

Even if E&E loses in the trial court—and it most likely will—the group will have nonetheless succeeded in bullying climate scientists. This, rather transparently, was the point. If E&E had concerns about the empirical rigor of climate research, it could have scrutinized the findings of specific studies. Instead of interrogating the final product, it went after the hastily scribed emails exchanged between colleagues. “I have taught, researched and administered in academia for more than 40 years and have not seen a time in which freedom of inquiry has been more needed, or more imperiled than it is now,” Hughes wrote in a letter to University of Virginia president Teresa Sullivan when E&E was working to obtain Mann’s emails. “Nothing is more likely to quash the creativity of America’s scientists than the ever-present ear of a hostile listener intent on finding, at all costs, the appearance of malfeasance. Nothing is more calculated to discourage research into topics that may challenge power interests.”

Climate scientists have an unlikely ally in the Trump administration.

At the federal level, the issue becomes more complicated. The legal protections that guard the emails of federally-funded climate scientists also shield government employees, including those working for the president. As a result, climate scientists have an unlikely ally in the Trump administration.

In 2015, the conservative nonprofit Judicial Watch made a FOIA request to obtain the emails of climate scientists at the National Oceanic and Atmospheric Administration (NOAA). Judicial Watch has a history of harassing opponents with records requests—most notably Hillary Clinton. Its president, Tom Fitton, claimed the NOAA documents requested would show “the Obama administration put politics before science to advance global warming alarmism.”

The administration, though leaky, is notoriously secretive. U.S. Environmental Protection Agency chief Scott Pruitt, who regularly antagonizes climate scientists, recently installed a $25,000 soundproof booth in his office. Pruitt has also been sparing in his use of email, in part, as a response to a 2014 open-records request that revealed his close ties with the fossil fuel industry. “The Trump administration, I don’t think, is eager to be turning things over under open-record laws,” said Kurtz.

The rationale for protecting scientists’ emails from public disclosure is simple. FOIA was enacted to make government more transparent, but it also threatened to discourage open conversations among federal employees. Judges have interpreted the law to exclude these conversations from records requests—what’s known as deliberative process privilege.

“The deliberative process privilege was designed to allow agency employees to have freedom to communicate with each other and toss around ideas and engage in devil’s advocate debates and what-if arguments and really feel like they can be candid with each other,” Kurtz said. “In addition, there’s the rationale that people might toss out ideas that are later determined to be bad ideas and never implemented, and if you produce all those emails, it’s really going to confuse the public.”

The NOAA suit was settled in August. “The trial court judge agreed that the emails in the NOAA case were exactly the sort of emails that this deliberative process privilege was designed to protect,” Kurtz said. Judicial Watch declined to appeal to the ruling.

As with the University of Arizona case, the damage was already done. If Judicial Watch had concerns about the empirical rigor of the NOAA study, it could have scrutinized the data, the method or the results—all of which were publicly available. But, the group didn’t want to debate the merits of the science. Its goal was more specific.

A 2015 report from the Union of Concerned Scientists found that researchers in numerous fields—public health, environmental science, genetic engineering—face attacks from groups on both sides of the ideological spectrum. The report explains that “individuals and well-heeled special interests across the political spectrum are increasingly using broad open records requests to attack and harass scientists.” It warned that such tactics can “can curb the ability of researchers to pursue their work, chill their speech and discourage them from tackling contentious topics.”

With climate change, there is evidence that this is already happening. A 2015 study found that climate scientists frequently downplay the gravity of their findings in response to harassment. Authors wrote that, ” in response to constant, and sometimes toxic, public challenges, scientists have over-emphasized scientific uncertainty, and have inadvertently allowed contrarian claims to affect how they themselves speak, and perhaps even think, about their own research.” This erodes public understanding of science.

“We all lose when scientists self-censor due to continued harassment. We have a poorer understanding of the science and are less able to make good personal and policy decisions,” said Michael Halpern, head of the Center for Science and Democracy at the Union of Concerned Scientists. “Scientists will be more likely to keep their heads down and refuse to publicly engage or ask contentious research questions if they don’t feel that their peers who are attacked are adequately protected.”

How then do scientists balance privacy with transparency? Where is the line between confidentiality and obfuscation? 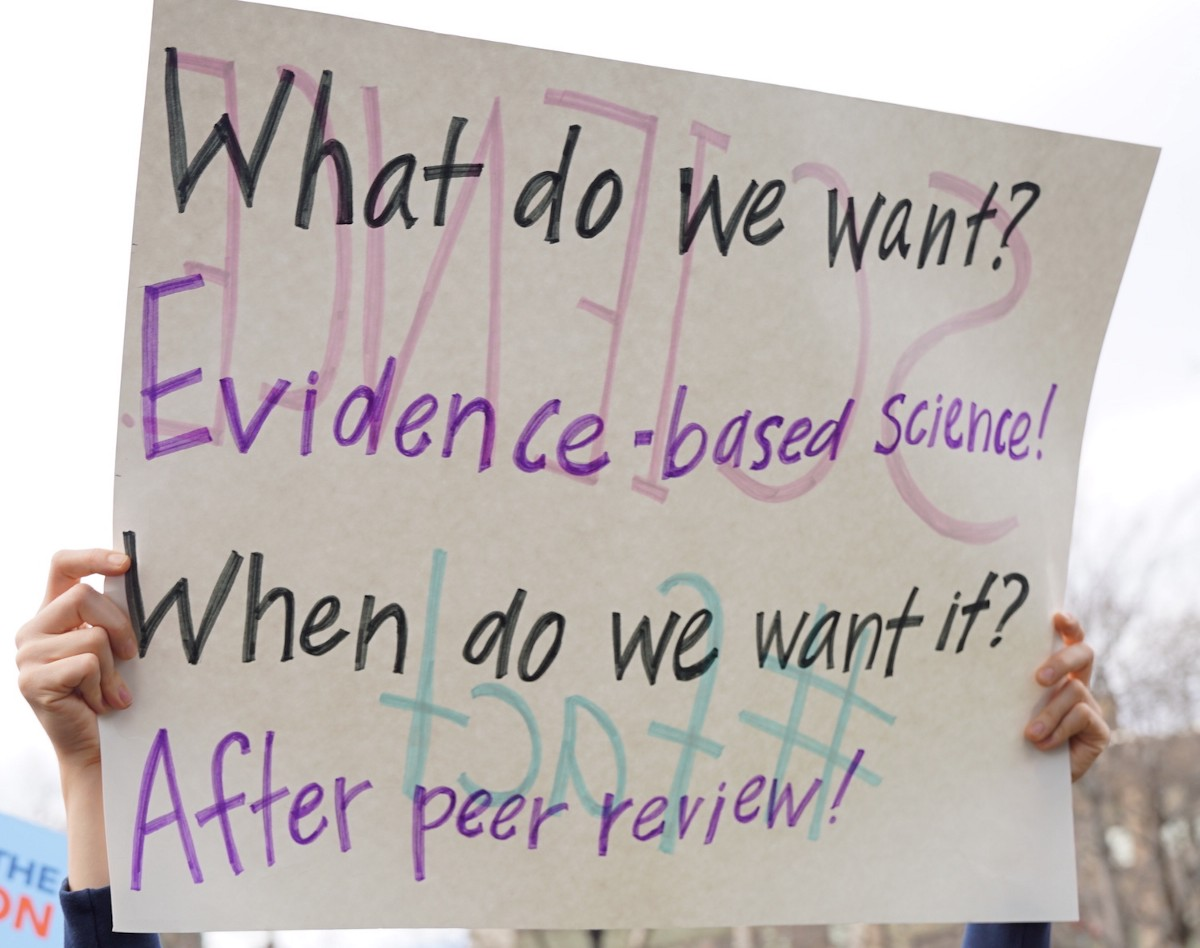 The Stand Up for Science Rally in Boston. Josh Landis

“We think it’s totally appropriate to FOIA for funding information and conflict of interest information,” Kurtz said. “When you’re getting into research emails and candid communication, I think that’s really harmful.” She added, “Short of something where you have actual evidence of criminal fraud, I think those things should be protected.”

FOIA is designed to give a window into the policymaking process, but science is already transparent. “When you’re doing a peer-reviewed study, your peers are looking at your research and giving you feedback on it, and they are determining whether or not it is appropriate for publication,” said Kurtz. Scientists must publish their data, their methods, their results, and they must disclose their source of funding .

“That sort of transparency is actually what you need to replicate the research, evaluate the research,” said Kurtz. “That is not happening in the policymaking field where FOIA was originally designed to operate.” 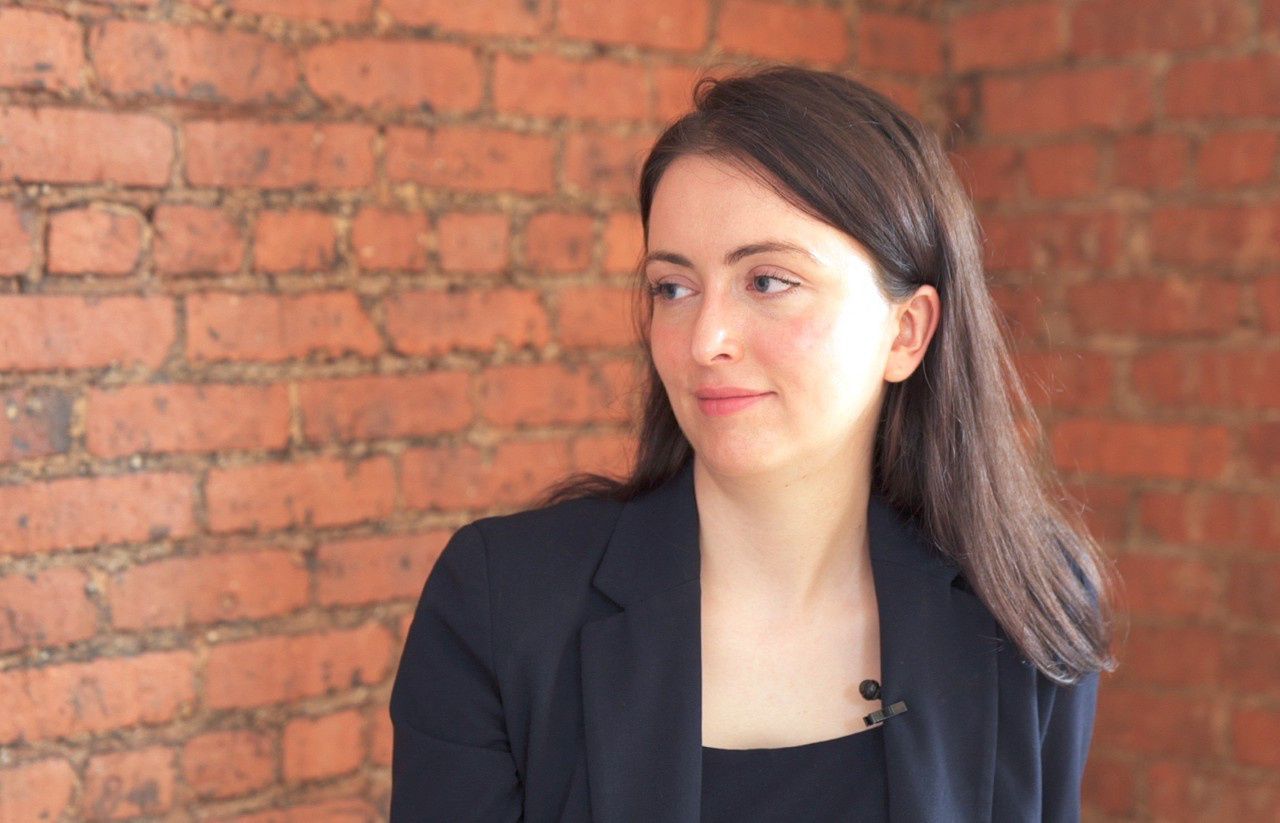 Because science is transparent, it is also self-correcting. Researchers can interrogate, criticize and improve upon each others’ work. In 2013, Thomas Herndon, a graduate student at the University of Massachusetts made headlines when he found a number errors in an influential study authored by two Harvard economists. The paper showed that economic growth slows down in countries with high national debt, and it was used to justify austerity measures following the Great Recession. Herndon, 28, published a paper which called attention to the errors and refuted its conclusions about national debt.

This is how research works. Researchers evaluate and attempt to replicate the findings of their peers. They have every incentive to prove each other wrong. Herndon’s work earned him the acclaim of serious economists, weeks of fawning press coverage and a star turn on The Colbert Report. Any person who could do the same for climate research would be similarly celebrated.

If E&E, Judicial Watch or any other groups were to find and publicize flaws in peer-reviewed climate research, they would be doing a public service. But, overwhelmingly, the data show that humans are driving the warming trend. So instead, right-wing groups go after emails, looking to defame scientists.

“Scientific transparency is obviously important,” Kurtz said. “What we want to preclude is scientists having to live in a fish bowl.”