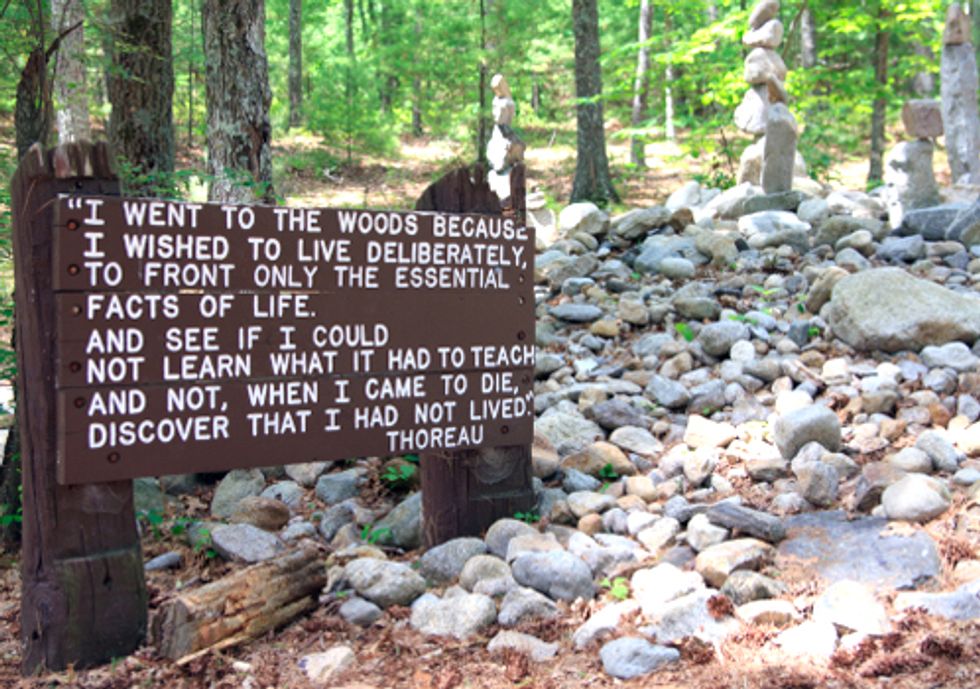 From Walden to the White House

If you could do it nonstop, it would take you six days to walk from Henry David Thoreau's Walden Pond to President Barack Obama's White House. For the Sierra Club, that journey has taken much longer. For 120 years, we have remained committed to using every "lawful means" to achieve our objectives. Now, for the first time in our history, we are prepared to go further.

Next month, the Sierra Club will officially participate in an act of peaceful civil resistance. We'll be following in the hallowed footsteps of Thoreau, who first articulated the principles of civil disobedience 44 years before John Muir founded the Sierra Club.

Some of you might wonder what took us so long. Others might wonder whether John Muir is sitting up in his grave. In fact, John Muir had both a deep appreciation for Thoreau and a powerful sense of right and wrong. And it's the issue of right versus wrong that has brought the Sierra Club to this unprecedented decision.

For civil disobedience to be justified, something must be so wrong that it compels the strongest defensible protest. Such a protest, if rendered thoughtfully and peacefully, is in fact a profound act of patriotism. For Thoreau, the wrongs were slavery and the invasion of Mexico. For Martin Luther King, Jr., it was the brutal, institutionalized racism of the Jim Crow South. For us, it is the possibility that the U.S. might surrender any hope of stabilizing our planet's climate.

As President Obama eloquently said during his inaugural address, "You and I, as citizens, have the obligation to shape the debates of our time, not only with the votes we cast, but the voices we lift in defense of our most ancient values and enduring ideas."

As citizens, for us to give up on stopping runaway global temperatures would be all the more tragic if it happened at the very moment when we are seeing both tremendous growth in clean energy and firsthand evidence of what extreme weather can do. Last year, record heat and drought across the nation wiped out half of our corn crop and 60 percent of our pasturelands. Wildfires in Colorado, Texas, and elsewhere burned nearly nine million acres. And superstorm Sandy brought devastation beyond anyone's imagining to the Eastern Seaboard.

We are watching a global crisis unfold before our eyes, and to stand aside and let it happen—even though we know how to stop it—would be unconscionable. As the president said on Monday, "to do so would betray our children and future generations." It couldn't be simpler: Either we leave at least two-thirds of the known fossil fuel reserves in the ground, or we destroy our planet as we know it. That's our choice, if you can call it that.

The Sierra Club has refused to stand by. We've worked hard and brought all of our traditional tactics of lobbying, electoral work, litigation, grassroots organizing and public education to bear on this crisis. And we have had great success—stopping more than 170 coal plants from being built, securing the retirement of another 129 existing plants and helping grow a clean energy economy. But time is running out, and there is so much more to do. The stakes are enormous. At this point, we can't afford to lose a single major battle. That's why the Sierra Club's board of directors has for the first time endorsed an act of peaceful civil disobedience.

In doing so, we're issuing a challenge to President Obama, who spoke stirringly in his inaugural address about how America must lead the world on the transition to clean energy. Welcome as those words were, we need the president to match them with strong action and use the first 100 days of his second term to begin building a bold and lasting legacy of clean energy and climate stability.

That means rejecting the dangerous tar sands pipeline that would transport some of the dirtiest oil on the planet, and other reckless fossil fuel projects from Northwest coal exports to Arctic drilling. It means following through on his pledge to double down again on clean energy, and cut carbon pollution from smokestacks across the country. And, perhaps most of all, it means standing up to the fossil fuel corporations that would drive us over the climate cliff without so much as a backward glance.

One of my favorite quotes is from Martin Luther King, Jr., although it has its roots in the writings of Theodore Parker (an acquaintance of Henry David Thoreau): "The arc of the moral universe is long but it bends toward justice."

I believe that, given sufficient time, our government would certainly follow the moral arc that leads to decisive action on this crisis. We have a democracy, and the tide of public opinion has shifted decisively. What's more, I doubt that even the most ardent climate denier actually wants to destroy our world.

We have a clear understanding of the crisis. We have solutions. What we don't have is time. We cannot afford to wait, and neither can President Obama.