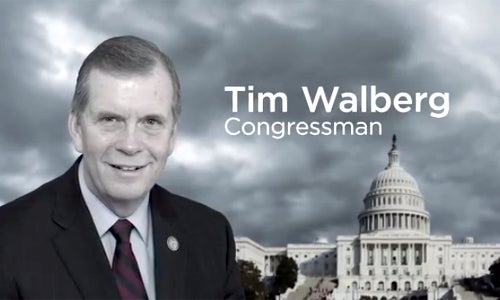 In its new TV and Web advertisement blitz, the Sierra Club is calling out names—21 of them.

The organization launched a national campaign Thursday urging Congress to reauthorize the wind production tax credit (PTC), which expired at the end of 2013 and has experienced little movement in Washington since. The Sierra Club campaign’s first wave targets 21 members of the U.S. House of Representatives who have either opposed the PTC or voiced no opinion, essentially allowing jobs and local investments to leave their districts.

The ad targeting U.S. Rep. Tim Walberg (R-MI) serves as an example of what the campaign has in store.

“But many in Congress are failing to act, leaving thousands of American workers and communities across the country blowing in the wind.”

The Walberg ad will air 5,000 times this month on broadcast and cable channels in Michigan’s 7th district. Geo-targeted online ads aimed at 20 other representatives launched this week and will run through at least June on local and national news websites.

“For wind in America’s heartland, the sky’s the limit,” said Mary Anne Hitt, director of Beyond Coal. “Wind energy has created tens of thousands of good-paying, family-sustaining jobs, and has the potential to create tens of thousands more—all while generating enough clean energy to more than meet our nation’s electricity needs.”

The wind industry employs about 80,000 workers and produces enough electricity to power 15 million homes. Before it expired, the PTC was a $0.022 per kilowatt-hour tax credit on the power that new wind farms in the U.S. generate for the first ten years of their operation. 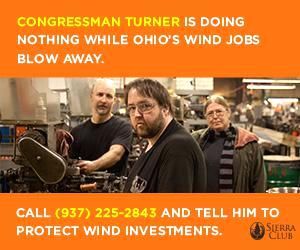 An example of a Sierra Club online ad, part of a campaign that launched this week. Graphic credit: Sierra Club

All of the ads are targeted at House Republicans. Here are the others: