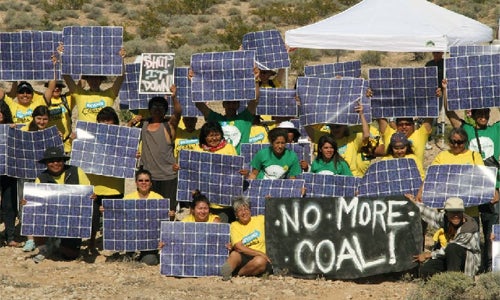 The retirement of NV Energy-owned Reid Gardner Generating Station is a major victory for the climate, clean air, renewable energy and the many people involved in the fight. While the efforts of Warren Buffett should not be ignored, it was years of relentless grassroots work by the Moapa Band of Paiutes and the Sierra Club as well as unwavering support from Sen. Harry Reid (D-NV) that drove this retirement forward.

For half a century, the Moapa Band of Paiutes have lived in the shadow of the Reid Gardner coal plant, but got little to no benefit from its hulking presence. Instead, the 200 Moapa residents were left to suffer the undeserved consequences of a filthy coal plant. Every year, Reid Gardner emitted more than 4,000 tons of nitrogen oxides, 1,200 tons of sulfur dioxide and 5 million tons of carbon pollution into the air. Those pollutants are known to cause or exacerbate asthma attacks, lung disease, sinus problems, thyroid disease, cardiovascular problems and even premature death. Since the 1960’s, the Moapa Paiutes breathed that air and have suffered from those health issues.

The impacts of this plant extended further than polluting the air. The amount of burned coal at Reid Gardner produced 46 million gallons of toxic coal ash that was spread into multiple settling ponds and then dumped into an unlined landfill. This waste contains mercury, lead and other dangerous heavy metals that cause cancer, heart, lung and kidney disease, reproductive problems, birth defects and many others. Having mounds of coal ash sitting next door leaves your land, home, and family vulnerable. Gusts of wind pick up the coal ash from Reid Gardner and carry it onto the Moapa Paiutes’ reservation land, covering their property, food and water in toxic ash. Additionally, coal ash toxins can seep into the ground from locations like the ponds and landfill, and pollute the groundwater that is used to drink, clean and farm. The Moapa Paiutes were not only up against a massive coal plant, but also the massive amounts of coal ash it produced, coal ash that still sits nearby.

Starting in 2005, the Sierra Club and Sen. Reid worked together to keep three coal plants from being built in Nevada. Two years later the Sierra Club heard about NV Energy’s plan to keep Reid Gardner open for at least another decade and to store more coal ash at the plant. That was when the Sierra Club joined the Moapa Band of Paiutes in fighting for their right to clean air, clean water and good health for their community. Last year our joint efforts paid off, when state lawmakers passed legislation that requires the retirement of the plant and stipulates that renewable energy will replace a significant amount of its power. Today, after decades of breathing dirty air and after years of fighting it, the Moapa Paiutes are relieved that the Reid Gardner plant is retiring and that clean energy, including a 200 megawatt project on the tribe’s reservation lands, will be built in its place. 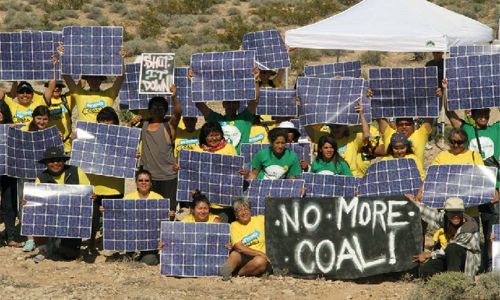 After decades of breathing dirty air and after years of fighting it, the Moapa Paiutes are relieved that the Reid Gardner plant is retiring and that clean energy, including a 200 megawatt project on the tribe’s reservation lands, will be built in its place. Photo credit: Sierra Club/Beyond Coal

While the end of this story is near, the fight is not over. The Nevada Public Utilities Commission still has to approve NV Energy’s replacement plan. The Reid Gardner coal ash ponds still need to be removed. The toxic dust and likely groundwater contamination still needs to be cleaned up. And the landfill still needs to be lined and covered. All of this will take years. And there are still two more coal plants left in Nevada that are endangering the state’s air quality and contributing carbon pollution to the atmosphere. But the coal-related injustices the Moapa Band of Paiutes have lived with are set to be resolved, and the Tribe is now participating in the new clean energy economy.

Bruce Nilles is the senior campaign director for Sierra Club’s Beyond Coal.