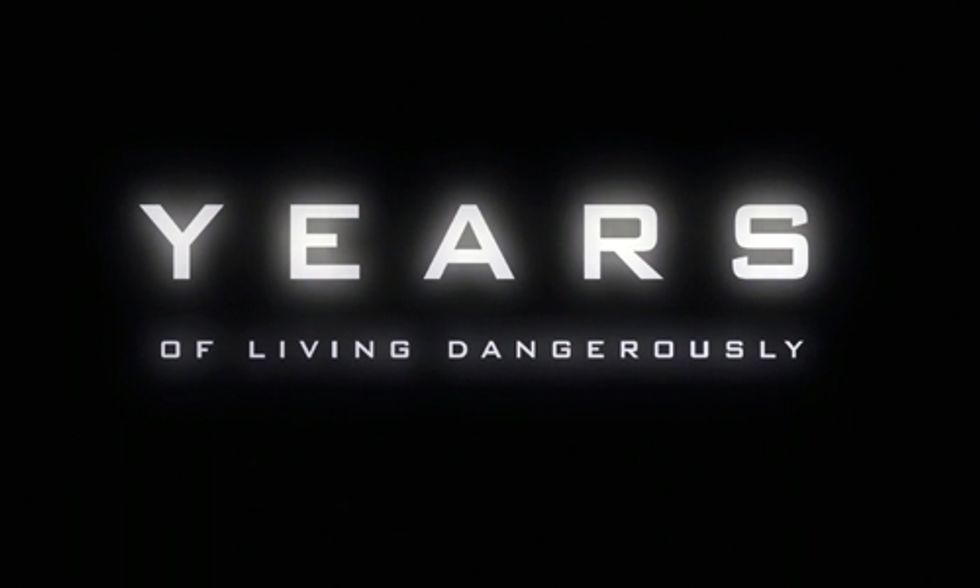 This April, Showtime will start airing its groundbreaking TV series on the experiences and personal stories of people whose lives have been touched by climate change. Years Of Living Dangerously is an eight-part series produced by the legendary storytellers and film-makers James Cameron, Arnold Schwarzenegger and Jerry Weintraub—together with three former 60 Minutes producers who have 18 Emmys between them.

Much as the best, most innovative long-form drama has moved from film to TV, in shows like the Game of Thrones, The Sopranos, Mad Men, Homeland and Breaking Bad, so too with documentaries. Here is the trailer:

You are going to want to subscribe to Showtime for this one, as I’m confident it’s what everyone is going to be talking about from April to June.

Nothing like this eight-part series has ever been put on TV before, a collaboration between the amazing storytellers mentioned above and top-flight journalists (like Chris Hayes, Lesley Stahl, and Tom Friedman) and some of Hollywood’s biggest stars (like Matt Damon, Ian Somerholder, Don Cheadle, Olivia Munn and Harrison Ford). They provide gripping reports of people affected by and seeking solutions to climate change.

As readers know, climate change is happening right here, right now—in the U.S. and around the world. It is the biggest story of our time, and it needs a big platform to tell it.

In a front-page New York Times story Sunday on why so many of the best TV shows seem to get aired on that evening, David Nevins, Showtime’s president of entertainment—the architect of hits like Homeland and Masters of Sex—explains that he puts a show on Sunday night “because I want to signal to the audience: This show matters. This is a big show.

“It deserves the big platform,” Nevins told the newspaper. “You’re not sending quite the same signal if you put it on Friday or Monday or Tuesday.”

Years Of Living Dangerously is going to be a very big show.