Should Parents Be Worried About Nanoparticles in Baby Formula? 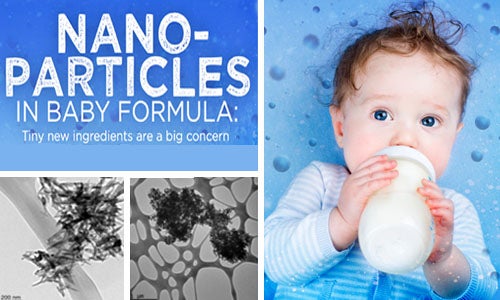 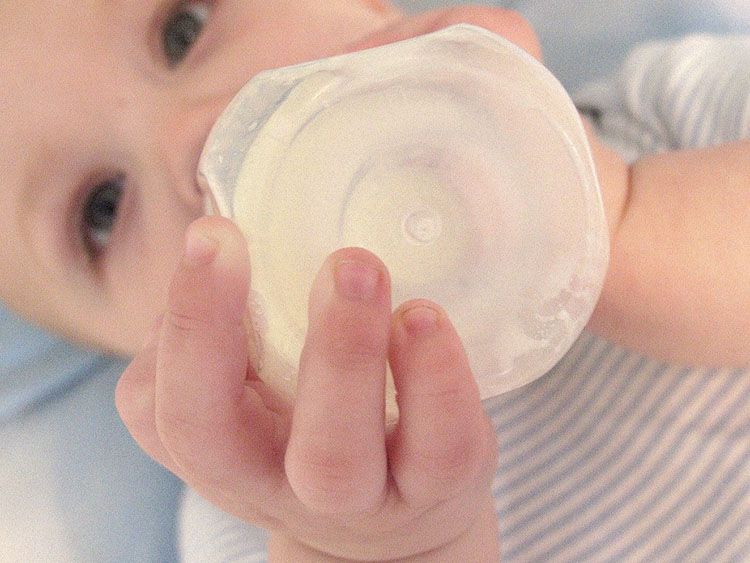 What’s in the bottle is good for me, right? Photo credit: nerissa’s ring / Creative Commons

The research, commissioned and published by Friends of the Earth—an environmental advocacy group—analyzed six commonly available off-the-shelf baby formulas (liquid and powder) and found nanometer-scale needle-like particles in three of them. The particles were made of hydroxyapatite—a poorly soluble calcium-rich mineral. Manufacturers use it to regulate acidity in some foods, and it’s also available as a dietary supplement.

Looking at these particles at super-high magnification, it’s hard not to feel a little anxious about feeding them to a baby. They appear sharp and dangerous—not the sort of thing that has any place around infants. And they are “nanoparticles“—a family of ultra-small particles that have been raising safety concerns within the scientific community and elsewhere for some years. 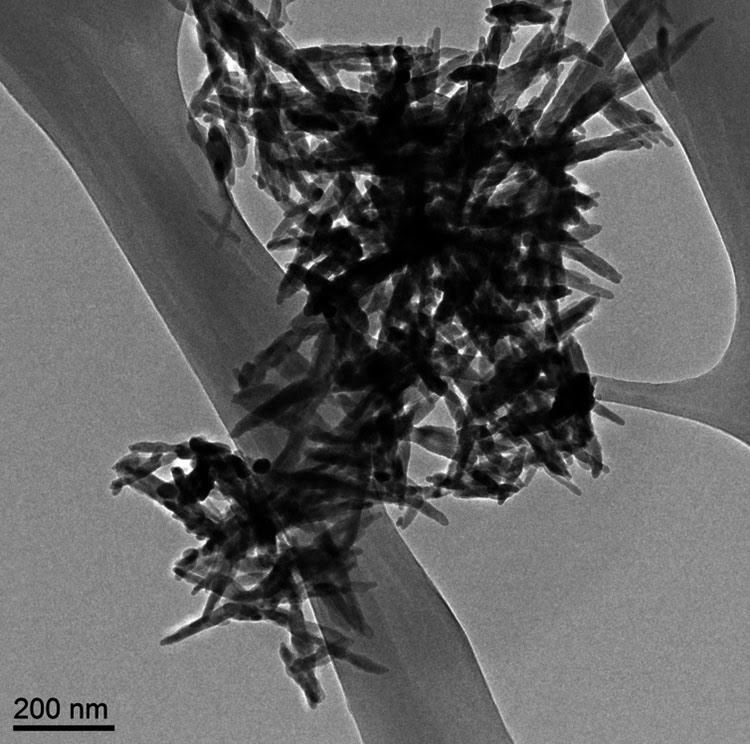 For all these reasons, questions like “should infants be ingesting them?” make a lot of sense. However, as is so often the case, the answers are not quite so straightforward.

What are these tiny needles?

Calcium is an essential part of a growing infant’s diet, and is a legally required component in formula. But not necessarily in the form of hydroxyapatite nanoparticles.

Hydroxyapatite is a tough, durable mineral. It’s naturally made in our bodies as an essential part of bones and teeth—it’s what makes them so strong. So it’s tempting to assume the substance is safe to eat. But just because our bones and teeth are made of the mineral doesn’t automatically make it safe to ingest outright.

The issue here is what the hydroxyapatite in formula might do before it’s digested, dissolved and reconstituted inside babies’ bodies. The size and shape of the particles ingested has a lot to do with how they behave within a living system.

Size and shape can make a difference between safe and unsafe when it comes to particles in our food. Small particles aren’t necessarily bad. But they can potentially get to parts of our body that larger ones can’t reach. Think through the gut wall, into the bloodstream, and into organs and cells. Ingested nanoscale particles may be able to interfere with cells—even beneficial gut microbes—in ways that larger particles don’t.

These possibilities don’t necessarily make nanoparticles harmful. Our bodies are pretty well adapted to handling naturally occurring nanoscale particles—you probably ate some last time you had burnt toast (carbon nanoparticles), or poorly washed vegetables (clay nanoparticles from the soil). And of course, how much of a material we’re exposed to is at least as important as how potentially hazardous it is.

Yet there’s a lot we still don’t know about the safety of intentionally engineered nanoparticles in food. Toxicologists have started paying close attention to such particles, just in case their tiny size makes them more harmful than otherwise expected.

So where does this leave us with nanoscale hydroxyapatite needles in infant formula?

What do regulators know about nano-safety?

Putting particle size to one side for a moment, hydroxyapatite is classified by the U.S. Food and Drug Administration (FDA) as “Generally Regarded As Safe.” That means it considers the material safe for use in food products—at least in a non-nano form. However, the agency has raised concerns that nanoscale versions of food ingredients may not be as safe as their larger counterparts.

Some manufacturers may be interested in the potential benefits of “nanosizing”—such as increasing the uptake of vitamins and minerals, or altering the physical, textural and sensory properties of foods. But because decreasing particle size may also affect product safety, the FDA indicates that intentionally nanosizing already regulated food ingredients could require regulatory reevaluation.

In other words, even though non-nanoscale hydroxyapatite is “Generally Regarded As Safe,” according to the FDA, the safety of any nanoscale form of the substance would need to be reevaluated before being added to food products.

Despite this size-safety relationship, the FDA confirmed to me that the agency is unaware of any food substance intentionally engineered at the nanoscale that has enough generally available safety data to determine it should be “Generally Regarded As Safe.”

Casting further uncertainty on the use of nanoscale hydroxyapatite in food, a 2015 report from the European Scientific Committee on Consumer Safety (SCCS) suggests there may be some cause for concern when it comes to this particular nanomaterial.

Prompted by the use of nanoscale hydroxyapatite in dental products to strengthen teeth (which they consider “cosmetic products”), the SCCS reviewed published research on the material’s potential to cause harm. Their conclusion?

This recommendation was based on a handful of studies, none of which involved exposing people to the substance. Researchers injected hydroxyapatite needles directly into the bloodstream of rats. Others exposed cells outside the body to the material and observed the effects. In each case, there were tantalizing hints that the small particles interfered in some way with normal biological functions. But the results were insufficient to indicate whether the effects were meaningful in people.

Importantly, these studies didn’t consider what happens when particles like this end up in the digestive system, including the stomach.

So what happens when a baby eats them?

The good news is that, according to preliminary studies from ASU researchers, hydroxyapatite needles don’t last long in the digestive system.

This research is still being reviewed for publication. But early indications are that as soon as the needle-like nanoparticles hit the highly acidic fluid in the stomach, they begin to dissolve. So fast in fact, that by the time they leave the stomach—an exceedingly hostile environment—they are no longer the nanoparticles they started out as.

These findings make sense since we know hydroxyapatite dissolves in acids, and small particles typically dissolve faster than larger ones. So maybe nanoscale hydroxyapatite needles in food are safer than they sound.

This doesn’t mean that the nano-needles are completely off the hook, as some of them may get past the stomach intact and reach more vulnerable parts of the gut. But the findings do suggest these ultra-small needle-like particles could be an effective source of dietary calcium—possibly more so than larger or less needle-like particles that may not dissolve as quickly.

Intriguingly, recent research has indicated that calcium phosphate nanoparticles form naturally in our stomachs and go on to be an important part of our immune system. It’s possible that rapidly dissolving hydroxyapatite nano-needles are actually a boon, providing raw material for these natural and essential nanoparticles.

Tempest in a baby bottle

And yet, even if these needle-like hydroxyapatite nanoparticles in infant formula are ultimately a good thing, the Friends of the Earth report raises a number of unresolved questions. Did the manufacturers knowingly add the nanoparticles to their products? How are they and the FDA ensuring the products’ safety? Do consumers have a right to know when they’re feeding their babies nanoparticles? 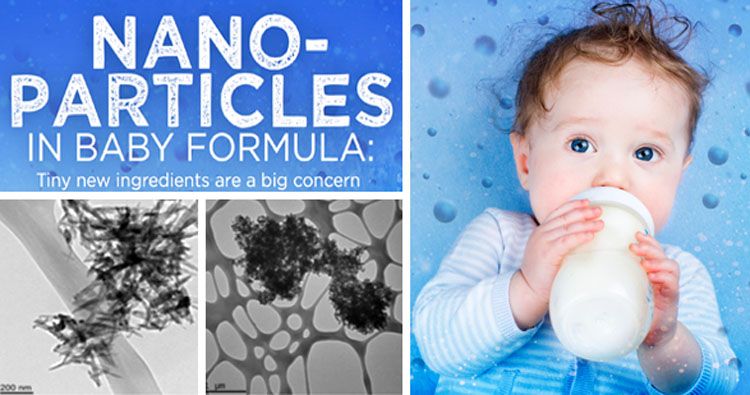 Whether the manufacturers knowingly added these particles to their formula is not clear. At this point, it’s not even clear why they might have been added, as hydroxyapatite does not appear to be a substantial source of calcium in most formula. (Calcium in formula can come from a number of sources, including milk solids, calcium carbonate and calcium chloride). If the nanoparticles’ inclusion was intentional, though, current FDA guidelines suggest that the regulator wouldn’t consider the material safe by default, and should be subject to further evaluation.

Certainly, from the data presented, these particles—so uniform in size and shape—look like they were intentionally manufactured to be nanoscale and needle-like. It’s possible they were supplied to the various manufacturers without any indication of their “nano-ness.” This doesn’t absolve the manufacturers of responsibility. But it does suggest that greater scrutiny and accountability is needed in the supply chain for food ingredients.

And regardless of the benefits and risks of nanoparticles in infant formula, parents have a right to know what’s in the products they’re feeding their children. In Europe, food ingredients must be legally labeled if they are nanoscale. In the U.S., there is no such requirement, leaving American parents to feel somewhat left in the dark by producers, the FDA and policy makers.

Given the state of science on nanoscale hydroxyapatite in foods, this is as much an issue of trust as it is safety. The Friends of the Earth report may exaggerate the possible risks, and raise concerns where few are justified. Yet it’s hard to avoid the reality that, if manufacturers are adding nanoparticles to what we feed our children, we need to know more about how to ensure their safety and benefits. How else can we enable informed decisions?

Luckily, current research suggests hydroxyapatite nanoparticles in formula are most likely safe, and arguably, even beneficial. But given how high the stakes are, safety here should not, and indeed cannot, be taken for granted.

Andrew Maynard, director of Risk Innovation Lab at Arizona State University, was an independent reviewer on the Friends of the Earth report on nanoparticles in infant formula.