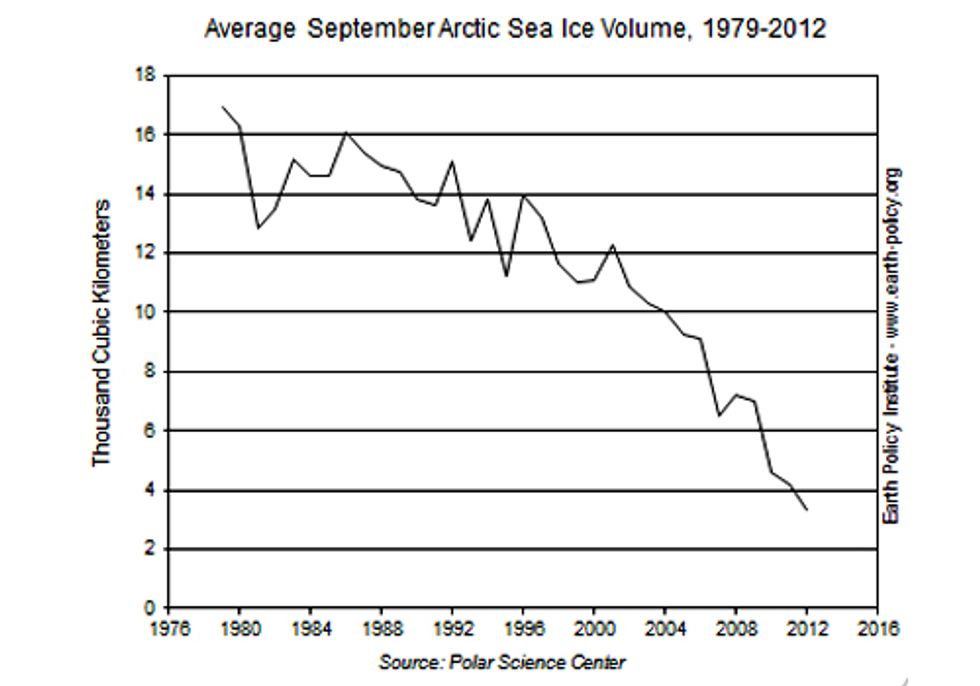 The North Pole is losing its ice cap. Comparing recent melt seasons with historical records spanning more than 1,400 years shows summer Arctic sea ice in free fall. Many scientists believe that the Arctic Ocean will be ice-free in the summertime within the next decade or two, and some say that this could occur as early as 2016.  The last time the Arctic was completely free of ice may have been 125,000 years ago.

Between March 20 and Sept. 16, the Arctic lost ice covering 11.8 million square kilometers—an area larger than the U.S. and Mexico together, and more than in any year since satellite measurements began in 1979. At its lowest point, Arctic sea ice coverage dropped to 3.4 million square kilometers, just half the average minimum between 1979 and 2000. The 2012 minimum was 18 percent smaller than the previous record low of 2007, a drop akin to beating the world marathon record by more than 20 minutes—an extraordinary feat.

The Arctic currently undergoes an annual melt and freeze cycle, which begins in the spring when the North Pole tilts toward the sun, warming the Arctic air and water and melting sea ice and glaciers. As the sun sets over the region in the fall, the sea ice expands, continuing to thicken during the dark winter. Wind circulation patterns and storms affect exactly how much ice melts and freezes in a given year, but as temperatures have been rising over the last few decades, ice coverage in the Arctic has begun a marked decline, and in recent years the shrinkage has accelerated.

The melting of the Arctic ice cap exposes dark ocean water, which absorbs more of the sun’s energy than the reflective ice, raising regional temperatures. This in turn accelerates the ice melt and makes it more difficult for new ice to form. In these warmer conditions, the ice that does return during the winter does not grow as thick and is more prone to melting when summer returns. Throughout the 1980s, close to half of the winter ice had survived one or more melt seasons. But by the start of the 2012 melt season, only a quarter of the remaining ice was more than a year old. Because of the dramatic thinning, the total volume of sea ice is shrinking even faster than its area. In just the past five years the minimum volume of ice in the Arctic was slashed in half.

An ice-free Arctic could alter weather patterns around the globe. Furthermore, while the melting of floating sea ice does not directly affect sea level, the extra heat in the region is accelerating the melting of the Greenland ice sheet, a massive body of ice three kilometers thick. If Greenland were to lose all of its ice, sea level would go up by seven meters. While that would not happen overnight, even a one meter rise in sea level, which we could easily see this century, would have devastating consequences for us all.