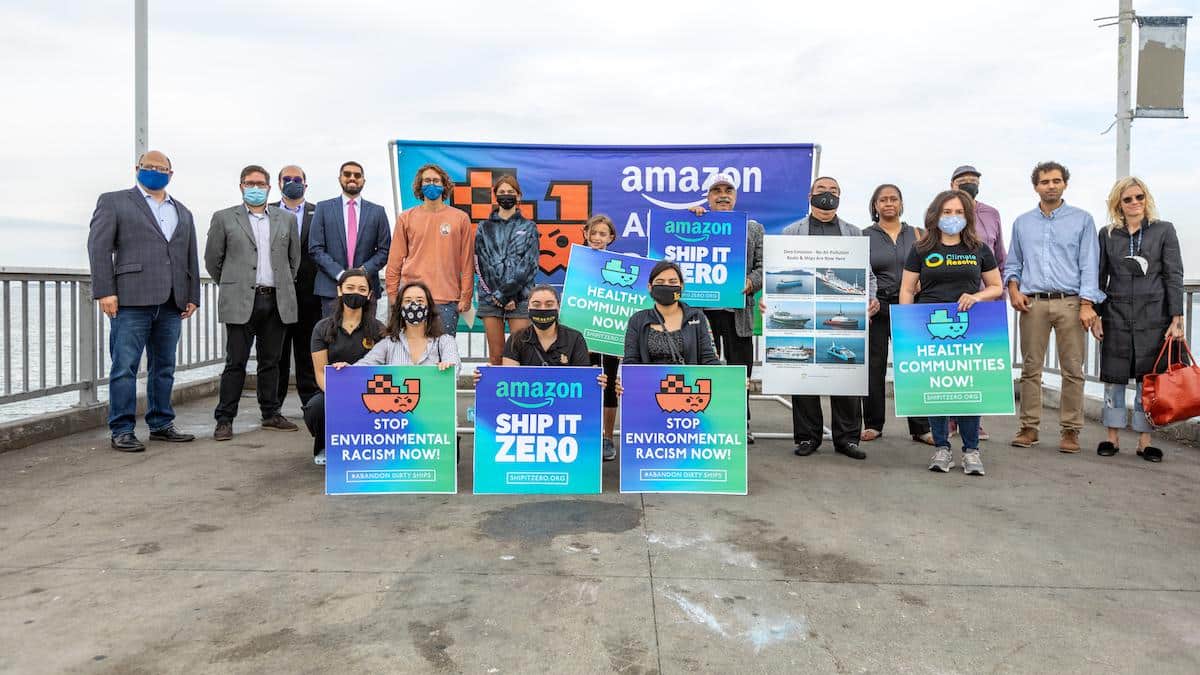 A new report details the relationship between four major retailers that ship goods to the U.S. and fossil-fueled carrier companies. Ship It Zero

As a congestion crisis continues to stall polluting container ships in ports around the world, there is a growing awareness of the role that international shipping plays in both the climate crisis and the public-health impacts of air pollution.

Released on Cyber Monday, a new report from Ship It Zero coalition members Stand.earth and Pacific Environment details the relationship between four major retailers that ship goods to the U.S. — Walmart, Amazon, Target and IKEA — and the fossil-fueled carrier companies that make that shipping possible.

“Major retail companies and cargo carriers are flush with cash from pandemic-driven record breaking profits and are tightening their already close relationships,” Stand.earth shipping campaigns director Kendra Ulrich said in a statement emailed to EcoWatch. “This is an unprecedented opportunity for retail brands and cargo carriers to work together to immediately reduce their maritime emissions from their existing container fleet and build zero-emissions shipping into their growth model.” 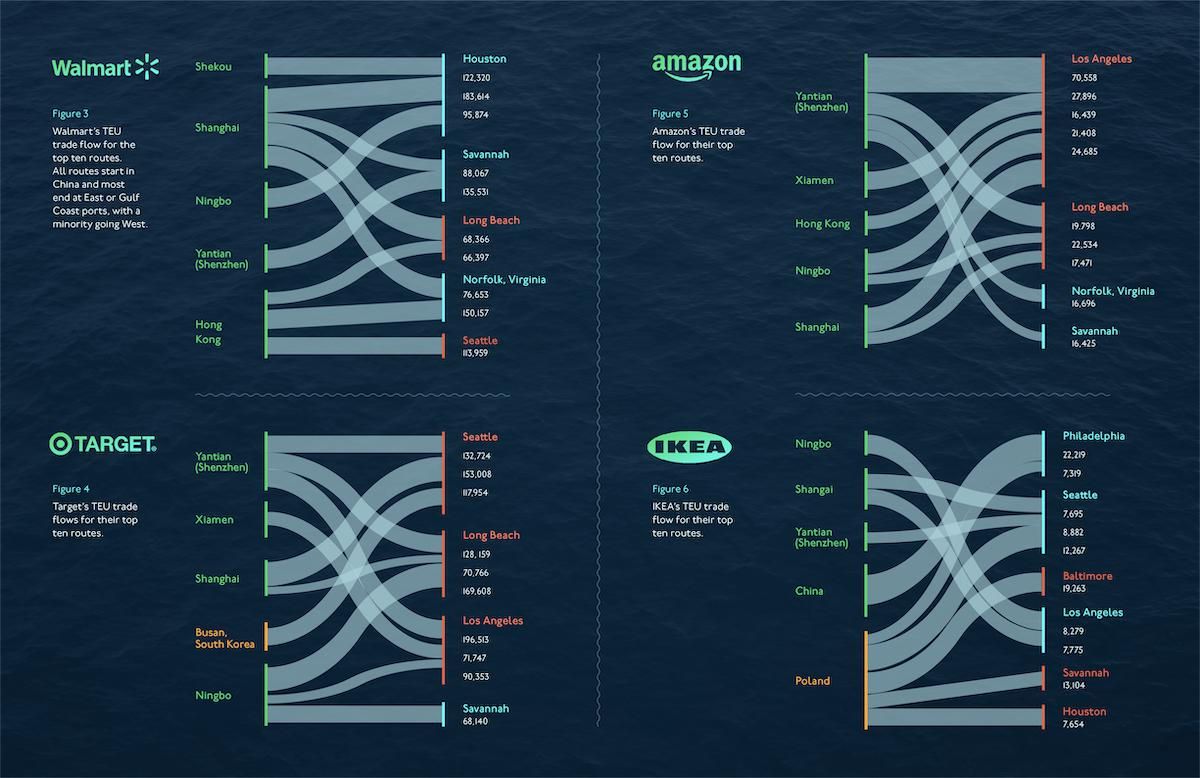 The new report builds on the work of the Shady Ships report released by Ship It Zero in July. That report detailed the 15 retail giants that caused the most air and climate pollution by shipping goods to the U.S. The new report focuses on just four of these companies, selected for both their brand recognition and the amount of pollution they contribute.

Together, the four companies’ U.S. imports were responsible for 20 million metric tons of carbon dioxide equivalent emissions between 2018 and 2020, as much as the yearly emissions from five coal-fired power plants. The report, titled Shady Routes: How Big Retail and their Carriers Pollute along Key Ocean Shipping Corridors, was able to better understand these emissions by mapping out the stores’ preferred routes and revealing their preferred carriers.

Walmart is the company whose U.S. imports generate the most pollution, and the report helped explain why. The retail giant tends to ship its goods from Asia all the way to the East Coast of the U.S., preferring ports in Houston, Savannah and Norfolk, Virginia.

It’s preferred carrier is also the greatest polluter among all the carriers studied in the report: French company CMA CGM. This company made $31.5 billion in revenue in 2020 and accounted for 68 percent of Walmart’s shipping emissions and 33 percent of all four retailers’ emissions.

Amazon and Target both prefer West Coast routes from China to Los Angeles/ Long Beach and Seattle/ Tacoma, while IKEA is increasingly moving goods by rail from China to Europe, and then shipping to Philadehpia and Baltimore. IKEA’s growing reliance on rail may be why its shipping emissions appear to be going down.

Understanding Target and Amazon’s routes in particular helps illuminate their role in the ongoing congestion and pollution crisis impacting frontline communities who live near West Coast port cities. This finding was particularly exciting for Ship It Zero campaign lead Dawny’all Heydari, who works in Los Angeles.

Pollution from container ships is a longstanding public-health crisis for the LA-area portside communities of San Pedro, Wilmington and West Long Beach, which have a life expectancy eight years lower than the LA county average. However, the increase in shipping caused by the pandemic has only made the situation worse. Target, for example, has doubled its digital sales during that time.

“The congestion crisis brought about by the pandemic, the turn to online shopping and in-house leisure, as well as holiday related trends, has shined an additional light on this issue,” Heydari told EcoWatch.

There are now more than 100 fossil-fueled container ships stalled beside the ports of LA and Long Beach, and this is only making the pollution problem worse, according to figures from the California Air Resources Board.

Since the congestion crisis started, “ships alone are pumping an additional 20 tons of smog-forming nitrogen oxides into the air each day, which is the equivalent of adding 5.8 million passenger cars to the region, and we also know that ships have added as much particulate matter pollution to the Southern California air basin as 100,000 heavy duty trucks,” Heydari said.

The California backlog has also spread the crisis up the coast to Seattle and Tacoma, where imports rose 40 percent in 2020 compared to 2018.

The report’s findings emphasize the need for immediate action to reduce and ultimately end shipping emissions. From a public health perspective, there is a “fierce urgency of now” to prevent the 260,000 early deaths caused by fossil-fuel shipping emissions every year, Heydari said. And, from a climate perspective, international shipping contributes three percent of global greenhouse gas emissions. If the industry were a country, it would be the sixth-highest emitter.

“If we don’t rapidly cut carbon emissions this decade, we could see a scenario where global warming reaches over 10 degrees Fahrenheit above pre-industrial levels by 2100, leading to a truly catastrophic scenario where we will see problems including uncontrollable wildfires, climate refugees, uncontrollable hurricanes, rapid loss of Arctic sea ice, rapid changes to our environment, etc,” Heydari explained.

Towards this end, Ship It Zero is demanding that the four companies and other major retailers take three actions:

Heydari said that Ship It Zero “welcomed” a recent pledge companies including Amazon and IKEA to purchase only zero-carbon vessels by 2040, but argued that it ultimately did not move fast enough, given both the importance of reducing emissions this decade and the fact that zero-carbon vessels should be available long before then.

In the meantime, does that mean you shouldn’t be taking advantage of Cyber Monday deals until these and other retailers have changed their ways? Heydari said that Ship It Zero was focusing on corporate accountability rather than consumer behavior. What concerned individuals can do is visit Ship It Zero’s website and sign a petition urging the four companies to take action.

“The problem is fixable if these companies transition to zero-emisson vessels,” Heydari said. “There’s no reason why we wouldn’t have a functioning economy where people’s needs are met.”