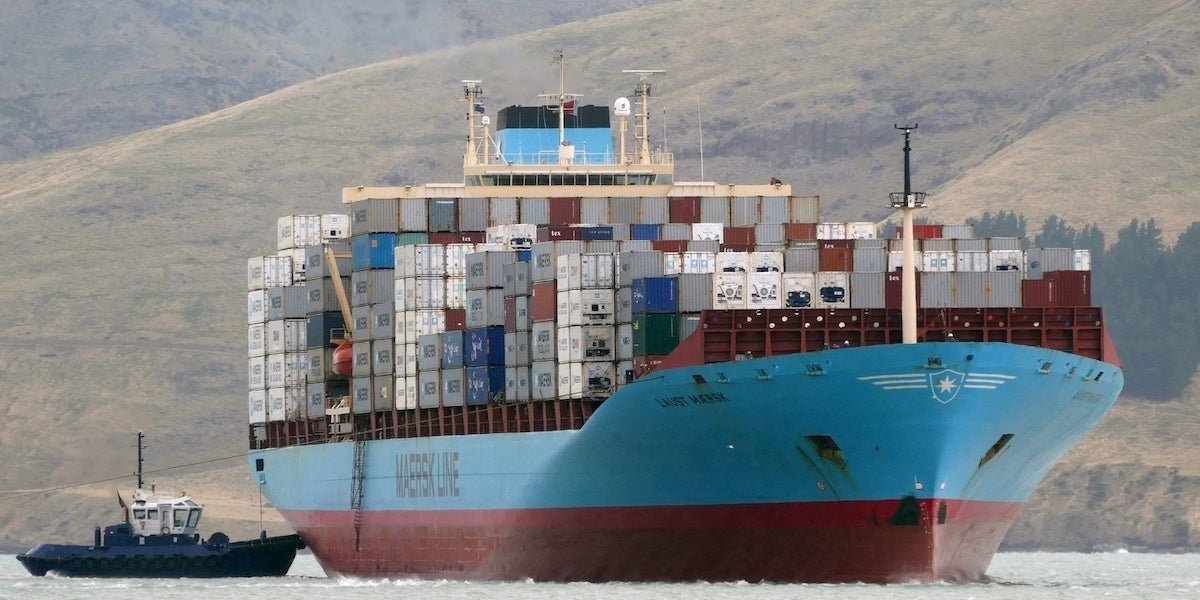 Denmark’s Maersk Line, the world’s largest shipping company, will soon be the first to send a container vessel through Russia’s Northern Sea Route, as the melting Arctic opens up new trade possibilities.

The Northern Sea Route has been historically impossible or prohibitively expensive to cross due to frozen sea ice. But the Arctic is warming at a rate twice as fast as the rest of the globe due to climate change and has significantly thawed the region’s ice.

The Venta Maersk, which has a capacity to carry 3,600 shipping containers, will take off on its maiden voyage in the coming days through the polar waters north of Russia. The vessel will carry a load of frozen fish from Vladivostok in Russia’s far east to St. Petersburg in the west, avoiding the traditional southerly Asia to Europe route through Egypt’s Suez Canal, NPR reported.

Maersk is about to launch the first container ship on an Arctic route over the top of Russia – a move to find an alternative to the Suez Canal. https://t.co/cN6Sna1Lbi pic.twitter.com/jlv5tA9z8e

“This is a one off,” a Maersk spokesperson told shipping news site Splash.

Maersk says this is a trial voyage aimed at collecting research. The company is not certain about how long it would take the container ship to cross the Arctic.

“It is important to underline that this is a trial designed to explore an unknown route for container shipping and to collect scientific data,” the spokesperson continued to Splash. “Currently, we do not see the Northern Sea Route as an alternative to our usual routes. We plan new services according to our customers’ demand, trading patterns, and population centers. That said, we do follow the development of the Northern Sea Route. Today, the passage is only feasible for around three months a year which may change with time. Furthermore, we also must consider that ice-classed vessels are required to make the passage, which means an additional investment.”

Last year, a Russian tanker sailed across the Northern Sea Route in record speed and without the aid of an icebreaker for the first time. On its maiden journey, the 984-foot Christophe de Margerie tanker transported liquefied natural gas from Norway to South Korea in 19 days, about 30 percent faster than the regular route through the Suez Canal, the ship’s owner Sovcomflot touted then.

Sune Scheller, of Greenpeace Nordic, told The Independent the group is aware that more shipping companies are looking to traverse the polar sea, but said the move was “environmentally damaging in a number of ways,” mostly due to the use of heavy fuel oil and spill risks in the vulnerable region.

“It’s cheap, but it’s damaging. It’s more polluting, air quality-wise. It adds to particulate matter—black carbon, as it’s known—which rests on white surfaces like ice and snow and absorbs heat instead of reflecting it, which contributes to climate change,” Scheller explained. “If these ships were to have an accident then heavy fuel oil in the marine environment is bad. It’s even worse in an Arctic environment. The cold water temperatures slow or halt the natural breakdown of the oil. So it remains in marine environments for a much longer period of time.”

What’s more, the shipping sector is responsible for close to 3 percent of global greenhouse gas emissions.

This week, the Guardian reported that the Arctic’s thickest and oldest sea ice—also known as “the last ice area”—is breaking up for the first time on record. The breakage has opened up waters north of Greenland that are normally frozen-solid even in the peak of summer, a phenomenon that has been described as “scary.”

“The last ice area" is breaking up for the first time on record. #climatechange https://t.co/sjvm72YaHG