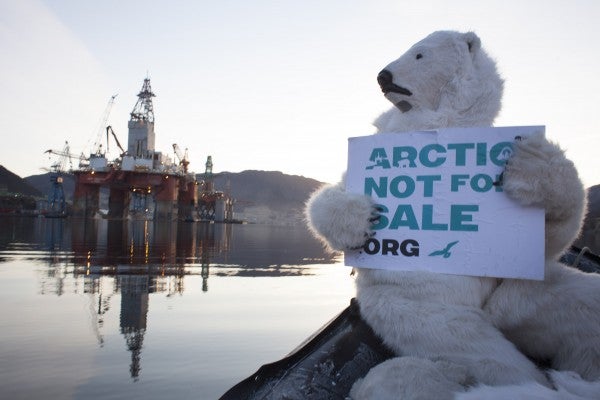 The Ninth Circuit Court of Appeals in California is currently weighing whether Shell has the right to preemptively stop Greenpeace from protesting Shell’s drilling in the Alaskan Arctic. If the court ultimately rules in Shell’s favor, nothing would stop other corporations from taking the same preemptive action against anyone they saw as likely protesters—from neighborhood groups to Amnesty International. The worst of these suits would eventually be overturned on appeal, but with the precedent set by Shell, anyone who wanted to silence protest outside a convention or a disaster site could do so for the duration of whatever activity they wanted to keep secret.

Advocacy groups like Greenpeace adamantly oppose this type of corporate secrecy. We work to bring attention to corporate destruction so people understand the stakes in fights from the Arctic to the Amazon. Our ability to go wherever the planet and its people are in danger is why Greenpeace strikes fear into corporations like Shell, so much so that they will go to extraordinary lengths to stop us from exposing the work it wants to keep secret.

In February 2012, as Shell prepared to begin what became its disastrous attempt to drill in the Arctic, the company filed an injunction against Greenpeace USA. This came the day after activists associated with Greenpeace New Zealand boarded the Noble Discoverer, one of Shell’s two Arctic class drill rigs. On March 1, 2012, despite the fact that no Greenpeace USA activists were involved in the New Zealand action, a federal judge granted Shell a temporary restraining order and preliminary injunction prohibiting Greenpeace USA from taking action against “Shell’s interests,” including any otherwise lawful activity that might happen within a court-mandated “buffer zone.”

Greenpeace appealed this action, but through the summer 2012 drilling window in which Shell proceeded to “screw up” (according to Interior Secretary Ken Salazar), the Ninth Circuit Court of Appeals considered the case. So by simply mobilizing its lawyers, Shell was able to use the process to keep lawful protest away from the actions it wanted kept secret. Instead of seeing this as an abuse of the system, the three-judge panel rejected our appeal the day after Shell officially abandoned its plans to drill for 2013.

We have asked for an en banc review (in which a full slate of the circuit judges can hear the case), and we hope the court takes the full implications of what’s at stake into consideration.

If we have no plans to engage in civil disobedience, why would we appeal Shell’s preemptive legal maneuver? Why not just proceed with legal protests and other advocacy work while the case worked its way through the system? Because allowing a corporation to use its massive financial and legal resources to tie us up in court while it attempts to drill in secret would establish a terrible precedent for American democracy.

Greenpeace fully embraces our First Amendment right to raise our voices. We oppose any effort to take this right away through extraordinary legal means. Our power as citizens lies in our ability to shine a light on actions detrimental to public good. This freedom—this right— is the only thing that puts people power on any kind of scale relative to the power of multibillion-dollar corporations like Shell. Even though it’s enshrined in the Constitution and upheld through hundreds of court cases, Shell through extraordinary legal means is trying to take our right to protest away. If they succeed, it will have a devastating effect on protest rights in the U.S.