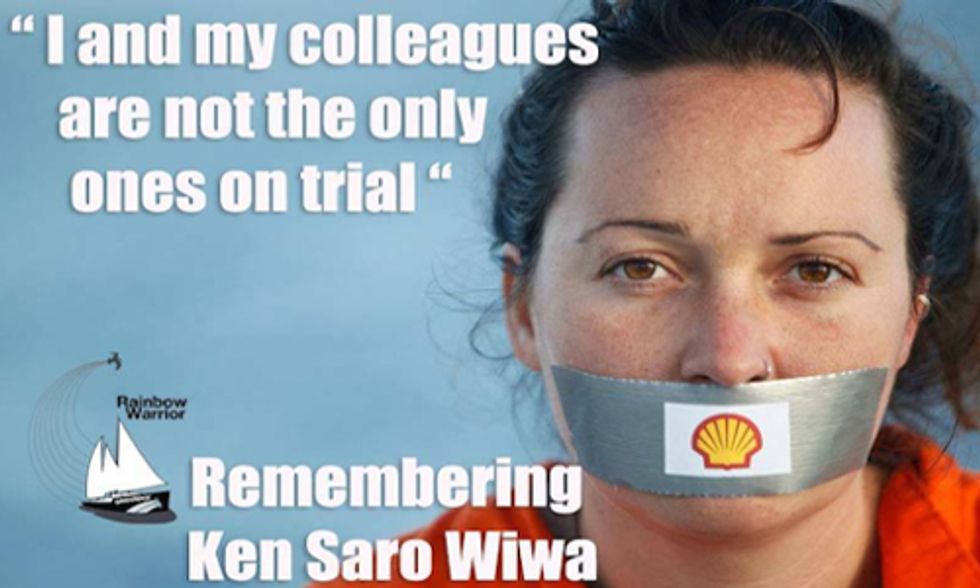 Yesterday was the eighteen anniversary of the murder of Ken Saro-Wiwa. The charismatic, pipe-smoking activist was murdered by the brutal military junta for his campaign against Shell in the Niger Delta.

Although Shell has always vehemently denied any collusion in Saro-Wisa’s death, the company cannot escape the fact that it directly and indirectly helped tighten the noose around his neck.

Results of legal action suggests environmental activist Saro-Wiwa was framed by the Nigerian military. Testimonies and documents reveal that Shell's silence on the matter tightened the noose around his neck.

Testimonies and documents uncovered by legal action against Shell suggests Saro-Wiwa was framed by the Nigerian military. That was the same military that was in the pay of the oil giant.

In the days before Saro-Wiwa was so brutally murdered, as the voices calling for clemency reached a crescendo, there was one voice that remained oddly and strangely silent: it was Shell.

The company said that quiet diplomacy was the way forward. It was a stance that was widely condemned at the time. We will never know what would have happened if Shell had spoken publicly, but we know that the stance they took was proved to be horribly and tragically wrong.

The world has changed in so many ways in those long eighteen years: we have had 9/11, the wars in Iraq, Afghanistan, and the Arab Spring. We have witnessed a technological revolution, which has brought us Google, Facebook, Twitter and smartphones. The world is not like 1995. But for many in the Delta, life remains the same: a daily struggle of grinding, bone-crunching poverty and pollution.

And so it goes on: last week, the Nigerian Nation newspaper reported how “Two years have passed since a United Nations Report calling for the clean-up of Ogoniland in Rivers State was presented. The Federal Government, which commissioned the study, promised action, but nothing has happened so far. The people have protested. Rights activists have complained about the matter. Their calls were handled with levity.”

Take the fight over the Arctic. Shell so far has spent $5 billion gearing up for drilling in the Arctic, and has suffered a whole series of mishaps and small calamities.

The inept and incompetent way the company has carried out its operations has meant that the company’s critics have compared its operations to Nigeria. But more importantly, it has shown that the oil companies are woefully ill-prepared for any major oil spill in the Arctic.

The oil giant has also ignored the overwhelming evidence that in our fight over climate change, we need to start divesting out of risky fossil fuels first. And that means the Arctic.

After a pause to lick its corporate wounds and reputation, the company recently announced that it was pushing ahead with its Arctic drilling program. In doing so it is basically ignoring 30 years of climate science.

It has become a belligerent climate denier, no better than the flat-earth trolls who stalk the internet. It has shown it is unconcerned about the communities on the front-lines of climate change, many of whom are in the Arctic.

For anyone worried about climate change, the most worrying thing is that Alaska is the “largest single exploration prospect in the Shell group.” Shell is betting the future of the group on the Arctic.

It is not surprising therefore that Shell has also steadfastly refused to intervene in case of the Greenpeace activists, now known as the Arctic 30 who have been imprisoned by the Russians for weeks for trying to board a Gazprom Arctic drilling rig.

Greenpeace has started an online petition targeted at Peter Voser, the CEO of Shell and other partners of Gazprom, which says:

As a key corporate associate, we’re asking you to do everything in your power to pressure Gazprom to help free the Arctic 30. For Shell that means breaking the joint venture to drill in the Arctic.

The petition comes at a delicate moment as Gazprom is on the brink of signing an important deal with Shell, who have promised to provide technology and expertise to their Arctic drilling programme

At his trial, Ken Saro-Wiwa pointedly said that “I and my colleagues are not the only ones on trial.” Then and now, the company is also on trial.

In the days before his death Shell stayed silent, in part claiming it could not influence the Nigerian military government. That was a lie, which is being repeated. As Greenpeace says: “Shell may claim that it has no influence over Gazprom but that’s simply not true.”

For many campaigning for the release of the Arctic 30, Shell’s silence is deafening. It is also the sound of the guilty.