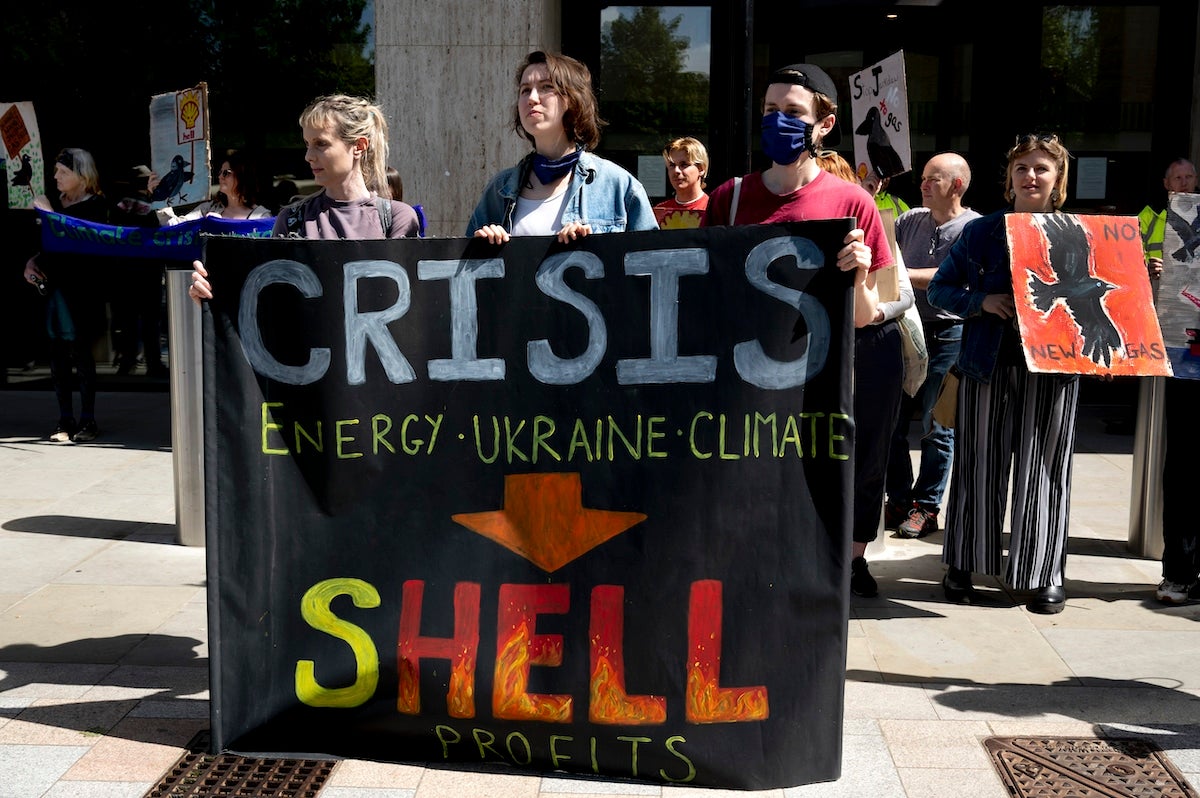 Climate activists protest outside the Shell headquarters against the decision to restart drilling for gas in the Jackdaw field in the North Sea, on May 8, 2022 in London, UK. Jenny Matthews / In Pictures via Getty Images

Oil giant Shell has paid no windfall tax in the UK and said it did not expect to this year, despite making a record $30 billion in global profits so far in 2022, The Guardian reported. Companies are allowed to reduce their tax payments if they make investments in production, and Shell wasn’t liable because it shifted its third-quarter profits into investments in oil drilling in the North Sea, reported Bloomberg Tax.

But this comes at a time when many people in the UK are struggling to pay their energy bills, and there have been calls for the government to make changes to the tax levy, which was meant to raise billions of dollars to help with the cost of living crisis.

General Secretary of the Trade Union Congress Frances O’Grady said Shell’s profits were “obscene — especially at a time when millions are struggling with soaring bills. The government has run out of excuses. It must impose a higher windfall tax on oil and gas companies. The likes of Shell are treating families like cash machines,” BBC News reported.

The energy profits tax was originally introduced in May by former Chancellor Rishi Sunak, who became the UK’s new prime minister earlier this week.

Following political pressure, Sunak had admitted energy companies were “making extraordinary profits, not as the result of recent changes to risk-taking or innovation or efficiency, but as the result of surging global commodity prices driven in part by Russia’s war” in Ukraine, reported The Guardian.

But extreme reductions to the tax were offered for investment in oil drilling in the North Sea, to the tune of about $1.05 for each $1.16 invested. The levies also didn’t apply to trading gas and oil shipments and other highly-profitable activities like refining.

“We simply are investing more heavily than we have, and therefore we don’t have profits which we can be taxed against,” said Gorman, as The Guardian reported.

It was anticipated by the UK government that the windfall tax would raise around $5.8 billion, but the tax loopholes could lead to much less revenue, some experts warned.

“The fact that Shell recorded the second highest quarterly profits in the company’s history is further proof that we need a proper windfall tax to make the energy companies pay their fair share,” said the shadow secretary for climate change and net zero Ed Miliband, as reported by The Guardian.

Skyrocketing energy prices as a result of Russia’s invasion of Ukraine led to profits of almost $9.5 billion for Shell in the third quarter of this year, more than double what the company made during the same time last year. It also saw a record $11.5 billion profit from April to June of this year.