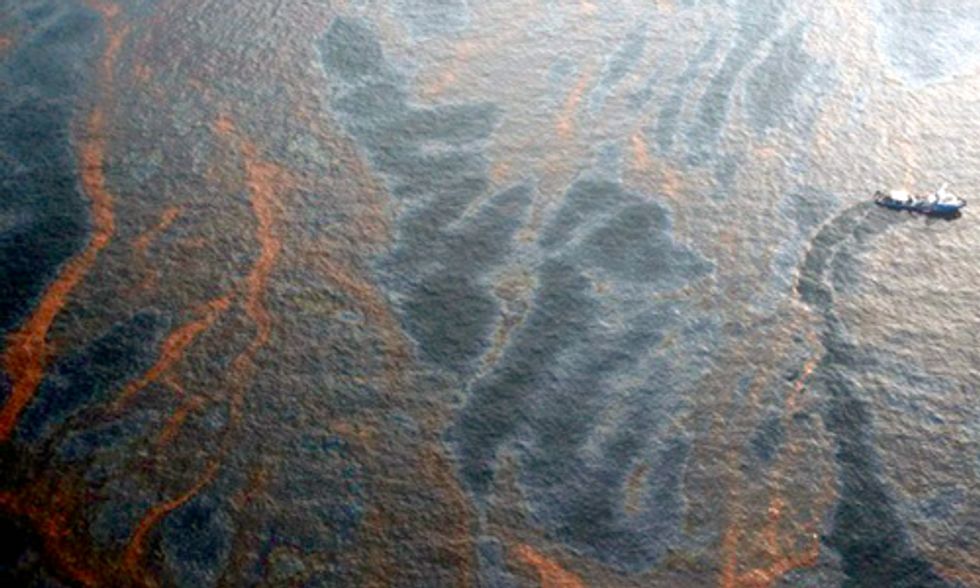 An oil spill from Royal Dutch Shell's offshore Brutus platform has released 2,100 barrels of crude into the U.S. Gulf of Mexico.

The leak—roughly 88,200 gallons—created a visible 2 mile by 13 mile oil slick in the sea about 97 miles south of Port Fourchon, Louisiana, according to the U.S. Bureau of Safety and Environmental Enforcement.

Officials said that the accident occurred near Shell’s Glider field, an underwater pipe system that connects four subsea oil wells to the Brutus platform, which floats on top of the water with a depth of 2,900 feet.

Shell spokeswoman Kimberly Windon said in a statement that the likely cause of the spill was a release of oil from the subsea infrastructure.

The Coast Guard said that the source of the discharge is reportedly secured. A cleanup crew has been dispatched.

Shell spokesman Curtis Smith said in a statement that a company helicopter observed the sheen yesterday, and that the wells were under control after it isolated the leak and shut in production.

"There are no drilling activities at Brutus, and this is not a well control incident," the company said. "Shell is determining the exact cause of the release by inspecting the subsea equipment and flowlines in the Glider field. The company has made all appropriate regulatory notifications and mobilized response vessels, including aircraft, in the event the discharge is recoverable. There are no injuries."

Citing industry trade publications, Reuters reported that the Brutus platform started operations 15 years ago and was designed with top capacity of 100,000 barrels of oil and 150 million cubic feet (4.25 million cubic meters) of gas per day.

Shell said that "no release is acceptable, and safety remains our priority as we respond to this incident."

The Bureau of Safety and Environmental Enforcement has tightened regulations for offshore operators ever since the 2010 Deepwater Horizon oil rig explosion that claimed the lives of 11 men and caused the largest man-made oil spill in history after dumping 3 million barrels of oil into the Gulf.

Still, environmental advocates have criticized Big Oil's insistence that offshore drilling can be done safely and have urged for the practice to stop.

“The last thing the Gulf of Mexico needs is another oil spill," Vicky Wyatt, a Greenpeace campaigner, told EcoWatch. "The oil and gas industry’s business-as-usual mentality devastates communities, the environment, and our climate. Make no mistake, the more fossil fuel infrastructure we have, the more spills and leaks we’ll see. This terrible situation must come to an end. President Obama can put these leaks, spills, and climate disasters behind us by stopping new leases in the Gulf and Arctic. It's past time to keep it in the ground for good."

"This latest offshore oil disaster once again demonstrates the inherent dangers of fossil fuels, and the irresponsibility of allowing new oil drilling in the Gulf of Mexico even as these spills continue to happen," Marc Yaggi, executive director of Waterkeeper Alliance, said.

The Louisiana Bucket Brigade noted in a press release this morning that the federal National Response Center clocks "thousands" of oil industry accidents in the Gulf of Mexico every year.

"What we usually see in oil industry accidents like this is a gross understatement of the amount release and an immediate assurance that everything is under control, even if it's not," Anne Rolfes, Louisiana Bucket Brigade founding director, said. "This spill shows why there is a new and vibrant movement in the Gulf of Mexico for no new drilling."

The Louisiana Bucket Brigade, which aims to end petrochemical pollution in the Pelican State and a transition to renewable energy, said that on the same day as Shell's accident, the Bureau of Ocean Energy Management (BOEM) held a hearing focused on the environmental impact of oil drilling in the Gulf of Mexico. During the hearing, Gulf residents brought in tar balls found just last month at Elmer's Island in Grand Isle, Louisiana as evidence that BOEM's environmental impact assessment is inadequate, the group said.

Gulf residents opposed to drilling are calling on President Obama not to open additional leases in the next Five Year Plan for the Gulf of Mexico.

"This latest offshore oil disaster once again demonstrates the inherent dangers of fossil fuels, and the irresponsibility of allowing new oil drilling in the Gulf of Mexico even as these spills continue to happen," Marc Yaggi, executive director of Waterkeeper Alliance, said. "We have a decade-long, ongoing oil spill that the government won't force Taylor Energy to fix and the Gulf is struggling from the impacts of Deepwater Horizon. The Gulf must no longer be treated as a sacrificial zone. It is time that the federal government recognized that for the health of our ocean, coasts and climate, there must be no further offshore oil leasing."